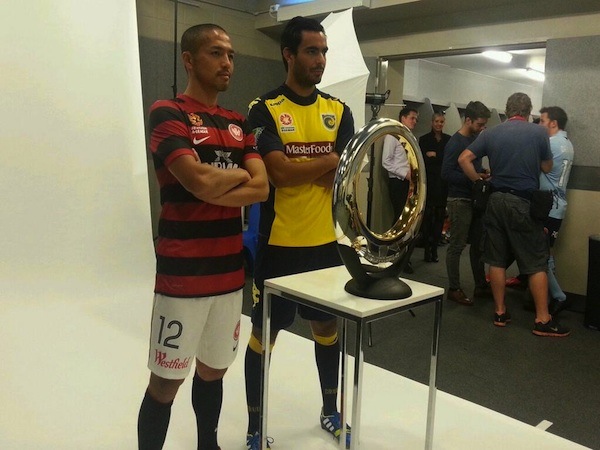 With the A-League’s long pre-season done and dusted, football fans around the country will have their eyes glued to the opening round of Australia’s premier domestic competition.

But just who will be challenging for the coveted ‘toilet seat’?

In the last of his A-League previews, Daniel Baricevic considers the teams he thinks will be playing finals come April next year…

One to watch: Alessandro Del Piero

The 38-year-old Italian World Cup-winner amassed 14 goals for Sydney last term and was a shining light in what was otherwise a dim season for the Sky Blues. His trickery and vision despite his advancing years is simply a class above the rest of the league, and more of the same is expected this season from the newly appointed captain. Should he form a solid partnership with Nick Carle in the final third, Sydney fans will have a lot to look forward to.

Frank Farina has done well to rejuvenate a squad that was carrying far too much deadwood. Sydney is a far more balanced side than last term, adding Richard Garcia and Nick Carle to its forward ranks, whilst Matthew Jurman, Pedj Bojic and Serbian import Nikola Petkovic will shore up a defence which conceded the most goals of any side last season.

Alessandro Del Piero has been missing for a majority of Sydney’s pre-season, but the best player in the competition will no doubt again hit double figures on the scoring charts.

This is a big season for Sydney. Those in the Cove will be demanding finals football and they’ll get it, however it’s difficult to see them challenging the Victory, Wanderers or Mariners for the title.

One to watch: Thomas Broich

The former FC Nuremberg man has been one of the best international signings in Australian domestic football history. He was instrumental in Brisbane’s back-to-back championships in 2011 and 2012 and despite the Roar having a relatively poor season by recent standards (finishing fifth), the German was still one of the best midfielders in the competition, grabbing 11 assists and two goals. His ability to act as the link between midfield and attack has earned him many plaudits, including the 2011/12 Johnny Warren Medal.

Brisbane’s starting eleven is as good as any in the league, however its lack of depth means injuries and suspensions could possibly put a halt to its title charge.

The return of Socceroo Matt McKay to the club is a massive boost, as is the signing of Perth’s Liam Miller. There’s no doubt McKay will occupy a midfield role instead of the left-back position he currently plays in for the national side, which means the Roar’s midfield will be the envy of the competition.

A midfield trio of McKay, Miller and Thomas Broich will provide striker Besart Berisha with many scoring opportunities, however if the Albanian succumbs to injury there are no adequate replacements up top.

The two-time A-League champion’s success this season largely depends on a clean bill of health, and if it can achieve that then a Grand Final appearance is not out of the question.

One to watch: Michael McGlinchey

The Scottish-born Kiwi international has established himself as one of the best midfielders in the competition and was pivotal in Central Coast’s championship win last season. Blessed with quick feet and an eye for a killer pass, the 26-year-old is in his prime and the Mariners will do well to hold onto him until the end of the season.

It is extremely difficult to split the top three teams, but the loss of experienced Dutchman Patrick Zwaanswijk and promising young keeper Mathew Ryan will hamper the Mariners’ ambitions of back-to-back championships.

Marcel Siep looks to be a solid replacement for Zwaanswijk in defence, but it’s a big ask to fill the big man’s shoes. Likewise with Liam Reddy, a solid goalkeeper at A-League level, but he is not the quality of Ryan.

However, new signing Marcos Flores should flourish playing in his preferred creative #10 role. The Argentine struggled at the Victory last season, as he struggled to come to grips with his ‘false nine’ position under Ange Postecoglou, but he will be given licence to roam like he did at Adelaide United three years ago where he was awarded the league’s best player.

The return of Matt Simon from China adds another dimension up front and will boost competition for a starting role with Mitch Duke and Daniel McBreen both vying for the same position, which can only mean good things for coach Graham Arnold.

It really could go either way, but the Victory and Wanderers have made the bigger improvements out of the three, so the Mariners may just miss out on a Grand Final berth.

BEHIND THE SCENES | There was banter between Shinji and Marcos during the photo. Are you pumped for Round One? pic.twitter.com/rwyXv6yYD7

One to watch: Shinji Ono

Ono was outstanding for the Wanderers in their debut season, scoring eight goals from midfield and grabbing three assists. But it’s not the stats that show his quality, rather his influence on games. His ability to dictate the tempo of a match when in possession of the ball is first class, meaning the ex-Japanese international has become a firm fan favourite at Parramatta Stadium.

The Wanderers certainly haven’t taken a backward step heading into their second season, strengthening a squad that won the minor premiership last season.

Striker Tomi Juric is an astute signing by coach Tony Popovic, as the recently capped Socceroo largely impressed during his short stay at Adelaide United after his move from Croatian outfit Inter Zapresic. He replaces the hard working but goal-shy Dino Kresinger who has moved to Slovenia.

Brendon Santalab returns to the A-League after spending four years in China where he scored 33 goals in 75 appearances, so there is no doubting that the 31-year-old still has the quality to score regularly in his home country.

Perhaps the biggest signing made by Popovic is the capture of Socceroo defender Matthew Spiranovic. Western Sydney conceded the least amount of goals of any team last season, and the addition of the 25-year-old strengthens the backline even more. Whether Topor-Stanley or Beauchamp makes way for him remains a question only Popovic can answer.

Many are suggesting that the honeymoon period may be over for the Wanderers, but under Popovic they are far too well drilled to let their standards drop. Another Grand Final appearance beckons.

One to watch: Mark Milligan

Victory fans were biting their nails when EPL side Crystal Palace announced its interest in the Socceroo, but the club stood its ground even in the face of two genuine offers for Milligan’s services. Had he left for the South Londoners, Victory would have lost both its on-field leader and most influential player.

Milligan was rewarded for his loyalty by being handed the captaincy for this season, after it was stripped from Adrian Leijer, and there was no one else in the team more deserving. The combative midfielder also possesses strong technical ability and is on track to be included in Holger Osieck’s squad for the 2014 FIFA World Cup.

With a bunch of high quality signings and a second year under Ange Postecoglou’s possession-based attacking style of football, much is expected from two-time A-League champions this season.

Although expected, the loss of last season’s Johnny Warren medallist Marco Rojas to the Bundesliga was one that had a lot of Victory fans worried, but they needn’t have as Postecoglou has adequately covered for the loss of both the Kiwi and Marcos Flores.

New additions Mitch Nichols and Kosta Barbarouses have both already played under Postecoglou at the Brisbane Roar and will fit seamlessly into the system and are proven A-League performers. Pablo Contreras is an excellent pick up; the 35-year-old Chilean has been capped 67 times by his country and has had a long playing career spanning 16 years across five different countries. His ability to be able to play out from the back as well as his leadership qualities is what attracted the Victory to the former Olympiakos and Monaco player, and he’ll be more than up for the physicality that the A-League brings.

The late signing of James Troisi on-loan from Serie A club Atalanta provides Victory with the strongest attack in terms of depth in the league. The returns of both Adama Traore and Guilherme Finkler from long-term injuries are almost like new signings for the Victory, and it’s hard to see any team bar the Wanderers or Mariners stopping them from winning a third A-League championship.

This story first appeared on BackPageLead