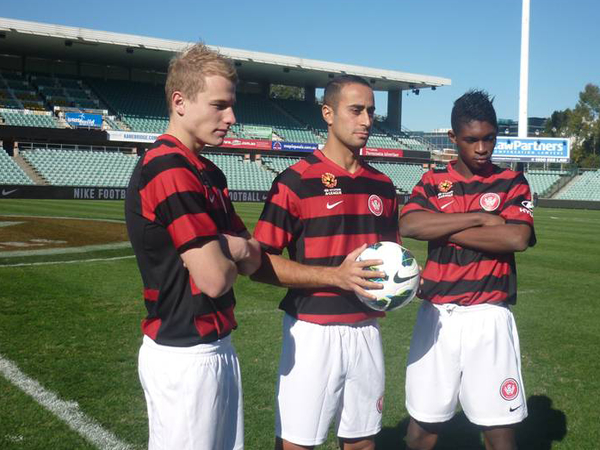 What an incredible year it’s been for the Western Sydney Wanderers. They currently sit proudly atop the A-League ladder in their first season in the competition, and can win the premier’s plate with a victory over Sydney this weekend.

This extraordinary feat is even more amazing when you consider that it hasn’t even been a year since the club was founded.

It was only 328 days ago that then FFA boss Ben Buckley announced to the Australian sporting public that a new team would enter the A-League. Based in western Sydney, the supposed home of football, the club would hopefully engage with the community and garner support from the locals.

At that stage, the club didn’t have a name, a stadium, a coach, or any players. However, less than a year later, the club is coached by ex-Socceroo legend Tony Popovic, sells out Parramatta Stadium, and has Shinji Ono (one of Asia’s biggest football stars) on its playing roster.

That club is the Wanderers.

Popovic came back from England where he was a first team coach at Crystal Palace, to take the reins of the new club. Popovic said the challenge was too enticing to pass up.

“This is a once in a lifetime opportunity to coach the new club in Western Sydney and I’m really excited about the mission ahead of us,” Popovic told the media at his unveiling.

“I grew up in West Sydney and learned my football there, but it’s the challenge of a start-up club in football’s heartland that has brought me home.”

Popovic has certainly given back to the community he grew up in. Few would have expected the Wanderers to be doing as well as they are, especially when other already established teams attracted players like Marcos Flores, Alessandro Del Piero, and Emile Heskey over the off-season.

The Wanderers’ continued rise to the top is in stark contrast to that of the other A-League expansion club, Melbourne Heart. Heart have struggled to make a strong impact in Melbourne, despite being around for three years. Aside from the derby matches against their much louder cross-town rivals the Melbourne Victory, Heart rarely draw respectable crowds.

The Wanderers, however, regularly attract over 8000 fans to Parramatta Stadium. According to FFA CEO David Gallop, Western Sydney’s trajectory will soon mean that they’ll need a bigger stadium.

“An upgrade to Parramatta or a new stadium is the next step, and the electorate and the game of football’s place with these voters will pose that question emphatically next weekend at the derby. While not every game is a sell-out yet, the Wanderers are on a growth trajectory unprecedented in Australian sport,” Gallop told Foxsports.

With talk like this happening after only one year, it’s clear the FFA got the formula right in Western Sydney.

The Wanderers and Melbourne Heart met last week at AAMI Park, resulting in an easy 3-1 win for the new boys, further highlighting the gap between the two sides.

Popovic has successfully managed to bring together a team that gels and plays attractive and effective football. They currently sit 5 points clear on top of the A-League ladder. A win this weekend against their biggest rivals Sydney FC will earn them the Premier’s Plate – awarded to the team that finishes on top of the ladder at the end of the regular season.

It’s been the Wanderer’s defence that’s impressed most. They have only conceded 20 goals in their 25 games, making them the best in the league. The central pairing of Michael Beauchamp and Nikolai Topor-Stanley, both of whom have pulled on the green and gold for Australia, has worked wonders.

Their midfield isn’t too shabby either. Youssouf Hersi and Aaron Mooy both consistently show the class and poise of players who have plied their trade in the tougher European leagues before coming to the A-League. Then of course there is Shinjo Ono, a Japanese football legend who has played 56 times for the Blue Samurai.

Mark Bridge, the A-League journeyman, has been as clinical as ever up front. His nine goals this season have helped catapult the Wanderers up the table.

The Wanderers are surely Australia’s feel-good sporting story of the year, and with that in mind will have a huge wave of support this Saturday when they take on Sydney FC. After all, who doesn’t love an underdog.

Paddy Naughtin is a third year Bachelor of Journalism student at La Trobe University, and a member of Upstart’s editorial team. You can follow him on Twitter at @PaddyNaughtin