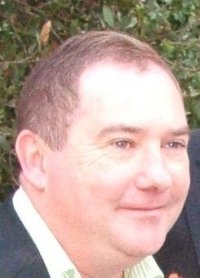 He isn’t on Twitter, his Facebook is private, and a Google search returns very little information about James Nevein.

In fact, he’s about as old-school as they come in journalism.

So old school that, as we sit and chat about his career as a Sun-Herald reporter, yellowed scrapbooks litter the dining room table.

Nevein turns the pages, sighing wistfully as stories flood back from days gone by – he has kept every article he ever wrote.

‘The best article I ever wrote was one that a friend of mine helped with. It was when I was working for the Institute of the Blind,’ Nevein explains. ‘It was about a brother and sister who were totally blind and totally deaf and how they got on with life.’

‘They still read, with braille, they still talked via sign language on their hands. They still lead a good life.’

Growing up in the admittedly rough area of Preston North in Melbourne during the 60s and 70s, Nevein always harboured aspirations to be a journalist.

‘I had a really good English teacher, Miss Denise Probert, with a pointy nose and blonde hair. She encouraged me with my writing, and suggested that I do a shorthand and typing course to give myself an advantage over other people.’

Nevein describes his experiences in the class with a twinkle in his eye.

‘I endured two years of being the only boy. We had to use these really old, really thick typewriters.’

He studied journalism at RMIT University. The degree takes pride of place on the wall of his office, right next to a forlorn-looking Richmond Tigers scarf. ‘I live by the philosophy of “there’s always next year”,’ Nevein sighs.

Of his studies, Nevein reflects on the difficulty of balancing both working as a cadet at the Sun-Herald and studying at RMIT.

‘The first year we got a day and a half off a week. After that we didn’t get any time off, so we had to just make it up. But they [the Sun Herald] paid for the whole course so that helped a lot, for sure.’

I’m eager for information about his career. What was it like? Where did he work? What was the most significant event he covered?

‘On Ash Wednesday, I was asked to go with a photographer to Lorne, but we only got to Anglesea, because the fires were already coming,’ recalls Nevein. ‘So we drove down to the beach, and we were just taking photos of the hill above the town.

‘Some people saw a tree moving, up on the hill. We eventually realised it was actually a man on fire, a man who hadn’t evacuated and was trapped.’

The events of Black Saturday in 2009 brought the time Nevein spent on the beach in Anglesea in 1984 to the forefront of his mind. Nevein and a friend had driven up through the affected areas to observe the landscape a month after the fires, proving old habits die hard.

During his time at the Sun-Herald, the Mr Asia drug syndicate, headed by Terry Clark, came crumbling down. One of Nevein’s most vivid memories as a still-green court reporter was covering a trial which contained a subordinate for the syndicate going on trial.

‘I was covering a drug trafficking charge and I was sitting in court. A man, the defendant, leaned over to me where I was sitting, quite close to me, and said “If you write anything about me, I’ll kill you”,’ Nevein chuckles.

Did he write anything about the defendant?

‘Of course,’ Nevein says, before bursting into outright laughter. ‘I made sure I got it right!’

Pressed for further memories of his time as a court reporter, Nevein pauses for thought, scratching his head. ‘There was one time. A man had committed a very serious murder and he was appearing in the Magistrates’ Court, for a very short 30-second committal hearing.

‘It wasn’t even really journalism. It was a colour piece.’

Nevein extols the necessity to keep one’s personal emotions out of a piece of writing.

‘The picture we wanted to paint was of this evil horrible person. But without saying that, because that would be defamatory and there was nothing to base that on.’

As the sun goes down behind the ample leafy trees that dot the inner eastern suburbs, Nevein excuses himself to re-fill his glass. A white wine man (although not fussy), his slightly reddened complexion suggests this is not the first glass of the evening.

Obviously journalism has undergone a vast transformation since Nevein left the industry. Does he feel as though it’s going forward or backward?

‘Both, really. But it doesn’t matter; it will go the direction people want it to go. It’s probably not going to be the major news source in the future. Facebook, Twitter, Google, people won’t go to get a copy of the paper, they’ll go elsewhere.

‘The value that journalism still has is the analysis and the interpretation of things that have happened. Facebook and Twitter can never drill down deep enough to go into the analysis of, for example, Julia Gillard versus Tony Abbott.’

Nevein’s opinion of today’s ‘shock jocks’, the likes of Alan Jones and Andrew Bolt, may surprise some.

‘They know their market. They’re there to get reactions. That’s okay, so long as you know when you’re reading a Bolt article or listening to a Jones show, that you know that’s where they’re coming from. I think they’re fine.’

Nevein ends the interview making a strong point about the idea of Australia’s suppression of free speech. Passion fills his voice and his brow furrows as he drives his point home.

‘There’s no such thing as free speech because we have such strong defamation laws in this country. So free speech doesn’t exist. It never has. It never will. Nor should it.

‘I shouldn’t publish in a newspaper something I know to be profoundly untrue and destroy your business under the banner of free speech. So free speech doesn’t, or shouldn’t, exist.’

Jordan Witte is a first-year Bachelor of Journalism (Sport) student at La Trobe University. You can follow him on Twitter @wittsjw