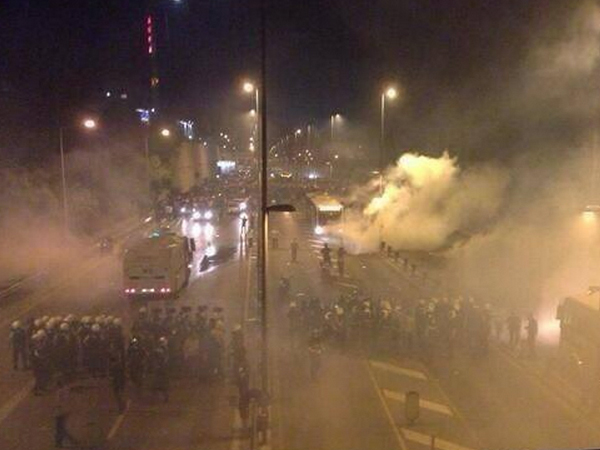 The 26-year-old has often joined the millions of Turks in anti-government street protests for the past 18 days.

Like many others, he has been the subject of extreme police brutality. He’s been fired at with tear-gas, water cannons and plastic bullets.

“They are trying to kill the city, the voice of its people.  The situation is terrible.” 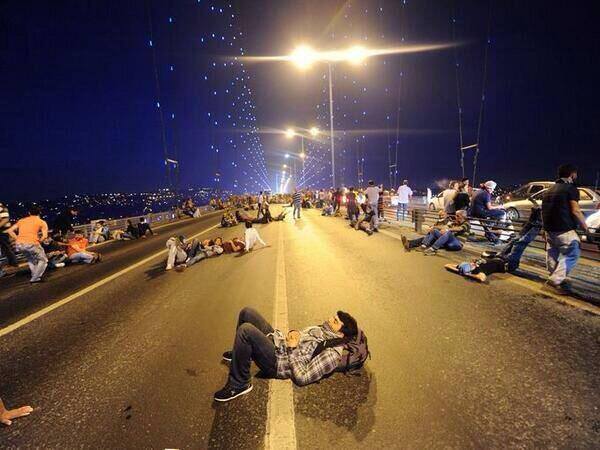 Aslay, like hundreds of others, took refuge on the weekend at Divan Hotel in Taksim Square.

“There were many children and many hurt people. It was terrible,” he says.

“Like scenes from a gas chamber, a horror film. It was hard to breathe, our skin hurt, it was very hot, we sweat like crazy, people cried, fainted, threw up, begged for help.”

This is what has become of the much-praised Turkish democracy.

For the past decade, the ruling Islamist-leaning Justice and Development Party (AKP), led by Prime Minister Recep Tayyip Erdogan, has been commended by much of the world for spearheading a period of economic growth and democratic reform.

Erdogan himself, who has been described as a moderate Islamist, has been a poster boy for the West to illustrate the argument that Islam is compatible with democracy.

The past two weeks has now left little question of the personal vendetta Erdogan has in seeing the transformation of Turkey through acquiring an unprecedented level of power.

What started as a 50-person protest against the redevelopment of one of Istanbul’s smallest parks has turned into a nation-wide resistance against police brutality, an oppressive regime and a prime minister who refuses to listen.

Erdogan couldn’t have predicted the level the Turkish uprisings have now reached.  In addition to the millions of people who occupy city streets every night in Turkey, thousands of others in Turkish diasporas from London to New York, Dakar to Melbourne have also voiced their opposition.

Ask any of the protestors why they’re on the streets and you’ll get a similar response: they’re fed up with how, for so long, Erdogan has intervened in the personal lives of ordinary citizens, managed to silence his critics and belittle anyone who disagrees with him.

This was on show again on the weekend, when Erdogan addressed tens of thousands of supporters in pro-government rallies in Istanbul and Ankara.  Erdogan openly threatened popular actor, Mehmet Ali Alabora, who has been supportive of the Taksim Gezi Park protests.

Erdogan had dismissed the protestors as “looters” and a “bunch of marginals”.  Alabora tweeted: “It’s not about Gezi Park, don’t you get it, my friend?” Erdogan vowed that he’d make Alabora pay for his comments.

But the artist isn’t the only target on Erdogan’s hit list.  The PM says the protests are a “game of the West” and has blamed media organisations such as CNN for “fabricating lies”.

Erdogan has said he’ll personally crackdown on anyone he believes are provoking or encouraging the protests.  He’s labeled Twitter a menace, and police subsequently arrested at least 30 people in Turkey’s third-largest city, Izmir, for tweeting about the protests.  A government spokesman says this is only the start of the crackdown.

And yet it’s not difficult to understand why social media has played such a large part in the Turkish uprisings.  Most of Turkey’s media refused to show the protests in the first few days while some continue to ignore them.

This week, the BBC suspended its partnership with NTV in Turkey, following NTV’s decision not to transmit the BBC program, World Agenda.  The BBC said its impartial service to audiences is vital; a principle much of the Turkish media – whose owners have commercial interests with the AKP – seem to overlook.

Many analysts now claim Erdogan’s position is simply untenable. He’s allowed, and instructed, police brutality against innocent civilians.  There are four confirmed deaths, hundreds of injuries and thousands who are detained.

He won’t resign, if not out of pride, out of a fear of being remembered as the PM who was defeated by a bunch of “looters”.

He’s ruled out an early general election, particularly since recent polling shows a significant decline in AKP support since the start of the uprising.

Amidst this, the protests continue to gather momentum, showing no sign of abating.  The unions staged a massive strike on Monday and every night, millions of people occupy streets with pots and pans.  Others flicker their apartment lights in support.

With no police intervention, the protests are entirely peaceful, which is what makes them unique. There’s also no clear leader, no political party leading the cause, and no spokesperson to ask what’s happening.

While the beauty and strength of it lies in these facts, they also render the future for the country completely uncertain.

Erdem Koç is a lecturer in journalism at La Trobe University with a Turkish heritage.  You can follow him on Twitter: @erdemkoc