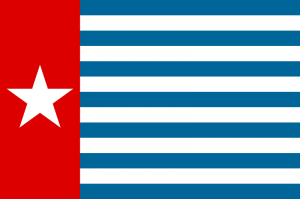 It is only 1545km from Darwin to Jayapura, the capital of West Papua, a province of Indonesia. Only 1545kms away from us, there are people suffering under brutal oppression. West Papua is one of our closest neighbours, yet despite the murders, rape, torture, disappearances, cultural dominance and fear, we hear very little about it in Australian mainstream media.

That is not to say the information is not out there, it is. It just hasn’t been given the level of attention that is warranted for the level of violence that the indigenous people of West Papua have to live through every day.

West Papua has a bloody and brutal history, a history that continues right up to the present day. According to Human Rights Watch’s World Report 2012, police violence increased dramatically in 2011. Many West Papuans were charged with treason as a result of peaceful protests, some arrested for simply raising the Morning Star, the flag of the resistance movement.

Very few journalists or human rights advocates have been allowed access to the troubled region. Amnesty International has estimated that the death toll for the conflict in West Papua is around 100,000 but many advocates believe it to be as high as 800,000.

It is well documented that the Indonesian security forces that largely control the region, and are responsible for acts torture and murder, are trained and supplied by the Australian Federal Police. It does become clear after research that the security forces operating in West Papua are fundamentally a law unto themselves and are corrupt and mercenary. The worst part? We have seen this before, in the struggle for East Timor and yet we give it very little attention.

Indonesia’s new law on state intelligence has implications for journalists, political activists and human rights advocates. Freedom of expression in Indonesia is controlled by a vast array of harsh legislation. This is very true of the situation in West Papua, where displaying the Morning Star flag is prohibited and many indigenous songs, especially those of the assassinated folk singer and musicologist, Arnold Ap, are publicly banned.

One documentary that aims to shed some light on the struggle of the people of West Papua is Strange Birds in Paradise. This documentary combines several elements to highlight the situation faced by the people of West Papua. Music is a thread running through this narrative linking refugees in Australia back to the land they had to flee. There is an overview of the history of Indonesia and its involvement in West Papua but it is also personalised by the stories of individuals.

Jamie Nicolai, a co-producer of the documentary, made it clear that while the film engages with the issue of Indonesia’s rule in West Papua, it emphasises the need to distance ordinary Indonesians from the actions of rogue elements in their military.

‘The last thing we wanted to do is to create more xenophobia about Indonesia because there is enough out there already,’ she says.

While the response to the documentary in Australia has been positive, the film was greeted with greater acclaim in Holland than it has been here. At a question and answer session at the end of the Dutch screening, Nicolai admits that for the most part, the questions demonstrated a much deeper understanding of the issues than their Australian counterparts.

Granted Dutch history is more intertwined with this region’s past, but in the present these countries are our neighbours and Australian business interests are reaping profits with little benefit to the local inhabitants. As Nicolai points out, that’s one of the worst injustices for the indigenous inhabitants of West Papua. In one of the richest provinces of Indonesia, the indigenous people get a rough deal.

When considering the power of music in resistance, one only has to look at struggles from around the world. The struggle in South Africa against Apartheid, the anti-war and youth movement in the West, the civil rights movement in America and struggles in Latin America all demonstrate the ability for music to not only unite within but also increase support from the outside. The songs of Arnold Ap are banned in West Papua for a reason. In a culture where music is so deeply ingrained, songs have the power to unify. The film, Strange Birds in Paradise highlights this and co-producer, Nicolai says, ‘The [songs] are most definitely a rallying point. It’s like a flag. It’s a symbol.’

As always, there are multiple layers of complexity regarding conflict and West Papua is no different. In the hope for freedom of West Papua along the lines of East Timor, one must take into account the substantial differences between the two regions. West Papua is the source of enormous wealth to both the Indonesian government and international investors (Australia is one), as the Freeport mine is the largest gold mine in the world. The population of Indonesian-born residents nearly outnumbers the original indigenous inhabitants.

After signing the Lombok treaty, Australia will be very reluctant to intervene in another country’s sovereign affairs, especially without a push from public opinion. As Nicolai suggests, ‘It was not the government but public opinion and people who swayed and changed what happened in East Timor.’ However the situation is not as hopeful as East Timor. ‘I think Indonesia will be much more reluctant to give up West Papua as easily as they gave up East Timor.’

The film, Nicolai says, was an entry level film designed, especially here in Australia, to open people’s eyes. ‘People are living in fear. Living in fear is wrong.’ There was much of this story that I was not wholly aware of and I am sure I am not alone. Although this documentary has been shown in Australia, including on SBS, films like this deserve greater exposure if the plight of the indigenous people of West Papua is to be more widely understood.

The question is can and will anything be done about it?

*The title of this article comes from the introduction to the documentary which says: ‘We’re going to tell you a story of a wonderful musical tradition, an ancient culture and a nightmare in the modern world.’