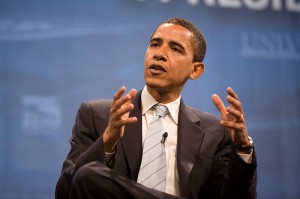 Fittingly, on a weekend featuring one of America’s most celebrated races, the Kentucky Derby, the presidential race got underway in earnest.

After months of posing and posturing, the real deal has begun.

President Barack Obama officially got his campaign underway, speaking at Virginia Commonwealth University, while Republican nominee Mitt Romney continued on the path that he began way back in the Republican Primary days.

So with the 2012 election day now on the horizon, thoughts can turn to what the key issues of the upcoming months will be, and how each candidate will try to tackle them.

Without doubt, the economy will almost certainly be the biggest talking point over leading up to November.

From a purely numbers standpoint, Obama has an incredibly poor track record in terms of economic performance over the course of his first term. Job growth – or the lack thereof – and historically poor GDP and income growth statistics arm Romney with abundant ammunition to attack the incumbent.

The Romney camp will charge home the fact that Obama hasn’t succeeded in his economic strategy, and theoretically, it has the numbers to prove it.

And while those numbers are not necessarily false, they are certainly misleading.

It goes without saying that these are some of the hardest fiscal times in recent history.

Obama – for the most part – inherited a basket case of an economy, and was left to try and sort through the charred remains left behind by his predecessor George W. Bush.

To Obama’s credit, he never said it was going to be easy, but I doubt even he thought it would be this hard.

Perhaps the best crutch for Obama’s economic performance is that during Mitt Romney’s stint as Governor of Massachusetts, he hardly developed a glowing economic record himself.

Records show that by the time the Global Financial Crisis hit, Massachusetts was one of only four American states to have not recovered the jobs lost as a result of the 2001 recession.

Another fact that Obama will surely hone in on is that Romney’s Massachusetts ranked 47th in job creation during his time in office.

So while neither can point to a shining star of economic success, both may be forced to admit their failings, while trying to say they at least aren’t as bad as the other guy’s.

Obamacare.  No word – even though it is a made up one at that – has haunted President Obama more during his first four years in office.

Republicans coined it a ‘government takeover’ of the healthcare system in the United States, as a tie in to their well-trodden ‘Obama the Communist’ routine.

While it is a great sound-byte the Republicans can utilise, it simply isn’t true.

Yet, while Republicans are busy convincing us that Obama is taking over the healthcare system, Obama and Co. will be striving to show how Mitt Romney implemented – what they will call – basically the same system during his term as Governor.

Obamacare and Romney’s plan do include similar facets; they both expanded Medicaid to the poor, both made governmental subsidies available to low-income families and individuals to help pay for health insurance premiums and both plans have been integral in reshaping the insurance market.

Call this one even.

It wouldn’t quite be a United States Presidential campaign without the debate of taxes being involved on some level.

Obama has been open about his plans to raise the taxes on America’s wealthy citizens, planning to ensure that they pay at least 30 percent of their income in taxes.

Yet, he supports continuing the Bush-implemented tax cuts for individuals earning less than $200,000, or $250,000 for couples.

Romney on the other hand, has outlined his plan to reduce taxes across all income brackets, to the tune of 20 per cent.

The biggest difference in the two plans in clearly the treatment of the richest Americans – or ‘the one percent’ – and expect that facet to be emphasised by Obama.

Societal issues are always key in elections, and abortion rights – along with gay marriage – is set to be a major talking point.

Obama is an advocate of abortion rights, his health-care laws require that contraceptives be available to women enrolled in workplace healthcare plans, without any additional cost.

Romney on the other hand, is against abortion rights, having stated, ‘abortion is the wrong choice’. However, he does not favor a national ban on abortion, instead insisting that it is a decision that should be made on a statewide basis.

Yet, the problem for Romney is that in the past he has supported abortion rights, a point that Obama will utilise as a way to try and convey Romney’s perceived indecisiveness.

Initially, Romney had stated that he believes in the right of a woman to decide, before changing his stance to what it is now.

While it’s hard for either candidate to have an edge in an issue that, at it’s core comes down to individual belief systems, Romney’s changed stance gives Obama a slight advantage.

Now this is controversial.  Obama has gone from being against gay marriage because of his religious belief, to becoming the first US president to actively support it.

As for Romney, he unequivocally opposes it.

It’s an interesting move by Obama; one that warrants a whole other piece!  Stay tuned.

Liam Quinn is a second-year Bachelor of Journalism student at La Trobe University.  He is currently on exchange at Michigan State University, and is covering the 2012 US Presidential Elections for upstart.  You can follow him on Twitter: @liamquinn23