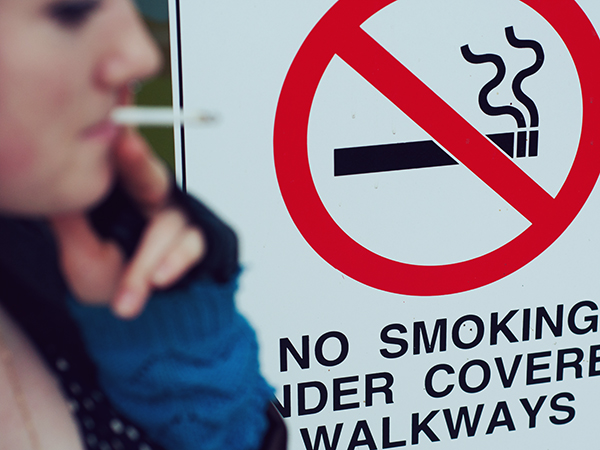 With the government considering banning cigarettes on university campuses, are they taking away the students right to smoke?

In recent years, smoking laws introduced by the government have been criticised for tip-toeing around the issue of Australia’s smoking culture and the health problems it causes.

Perhaps the $6 billion revenue raised by cigarettes in taxes each year may be the reason behind these laws, which are favoured by economists and politicians.

However, soon we may see a more direct approach.

From cigarette price hikes to plain packaging, smoking is no longer cheap, marketable or visually appealing. However, access remains relatively easy. But, soon we may see bans legislated in a number of places – including universities.

Fitting the theme of World No Tobacco Day last week, the ACT government is now considering broadening smoking bans to places where young people are known to spend time.

Bus stops, playgrounds and sporting fields are at the top of the list, with universities also being targeted by the new legislation.

Some students hold the view that it is not up to the government to decide where people can and can’t smoke.

University student Amanda Val is a non-smoker yet still disagrees with the legislation.

“I don’t see why there should be a ban. I understand prohibiting it in certain areas, but to ban it right through is to babysit adults.”

While some people believe that government regulation is not the solution, university student Trevor Wilson says: “Their [the smokers] choice impacts negatively on others, hence some want a ban for this reason. It is legitimate to want to protect public health in a public environment, and to use policies to achieve this.”

Beating the government to the punch, Swinburne University has announced that as of August 12, all of their university campuses will be smoke-free. They are the first Victorian university to do so.

Rather than simply saying no to smoking, Swinburne is also offering support to students and staff who wish to rid the habit both on and off campus.

Students and professionals have come out in support of the changes on twitter.

@swinburne hopefully it is just the beginning increased exemptions on public smoking, not pleasant at all. Glad you are taking the lead 🙂

At La Trobe University, students are trying to create their own change with the creation of a Facebook page to ban smoking in busy areas such as the Agora.

Professor of Public Health, Hal Swerissen says: “The evidence is that the less attractive we make smoking the more likely it is that people won’t take it up and that those who have will quit. If you haven’t started smoking by your early 20s you probably won’t. For every five students who don’t smoke one case of lung is prevented.”

However, the voluntary banning of cigarettes by universities is not all clean air and smiles.

When asked for their two cents on the issue, students at La Trobe University were divided.

Barry Amadeus doesn’t think the Government is going the right way about the issue.

“How many times do I have to say that banning something is not an appropriate response to a perceived social or medical problem.”

On the pro-ban wagon is Ashleigh Mason.

“Ban it for sure! Banning smoking in public areas is not about taking smokers’ rights away, it’s about making it less accessible for people to smoke… What about my rights? All I wanna do is eat my lunch without having smoke blown in my face. So sick of being forced to eat inside because the nice sunny grassy area outside is full of smokers.”

Amongst the divide, most were inclined to support designated smoking areas, which are already in place at many universities but students complain that non-smoking areas aren’t enforced.

Alex Woodward says: “Ban it, however, I’d be happy with designated smoking areas… I’d just be happy if that was properly enforced.”

While student opinion may hold off universities from imposing bans, it seems the government is willing to move ahead. Plans to ban cigarettes on campus are underway in every state and territory.

In the past few months of the last financial year, revenue from the tobacco tax fell by $341 million, which the government attributed to plain packaging.

Thus, if the look of a packet can reduce smoking, chances are making it more difficult to smoke will too.

Tahlia McPherson is a third-year Bachelor of Journalism student at the La Trobe University and is one of upstart’s staff writers. You can follow her on Twitter @TahliaMcPherson