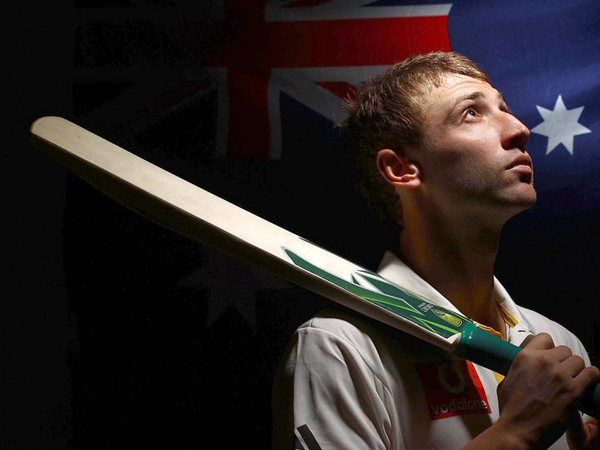 Like most Australians, and indeed many thousands of people across the world, my heart sank when I heard the news Phillip Hughes had died.

Hughes’s life support system was turned off at St Vincent’s Hospital in Sydney this afternoon. He was to never recover from being hit in the head by a short ball at the Sydney Cricket Ground just two days earlier.

The words ‘my heart sank’ don’t even convey the true emotions I, or we as a society collectively, have felt.

For the horrible death of a cricket star cannot be conveyed in words. For words belong to language that simply falls short in more ways than one on this occasion.

In the moment the breaking news alert came through on my phone, at that very moment, I would have given anything for it not to be true. This was despite seeing the footage over and over again of the short ball hitting Hughes. It was despite every piece of medical evidence I had heard and observed in the preceding 48 hours. Despite everything I knew about the cruelty of this world.

A young man, an elite athlete, at the peak of his career, in an instant, taken away, forever.

I knew very little of Phillip Hughes until he sustained his injury on Tuesday. I must confess cricket is not high on my list of favourite sports.

And thus I’ve felt quite strange – for a lack of a better expression – in trying to make sense of the immense sadness I’ve felt since his death.

But there’s something about the nature in how events unfolded leading to Hughes’s untimely demise which is what sits uncomfortably with us.

And yet this instant, this ordinary instant, had taken the life of a great player and – from what I’ve heard – a great bloke.

This ordinary instant will affect the young bowler, Sean Abbott, forever, whose, as the Financial Review’s Joe Aston put it, “wholly innocent part in this catastrophe is so cruel”. We feel for him. How can he ever shake off the guilt he must feel?

Today will continue to haunt the cricket and sporting community for a long time.

Questions will be asked, as observed in this publication earlier today:

Could the ambulance have gotten Hughes to the hospital quicker? Could a more up to date helmet have prevented the hit that ultimately killed Hughes? Should next week’s first test against India be rescheduled?

All these ought to receive the attention they deserve in due time. And so does every other element of the game. Everything.

Hughes’s legacy – if we can even call it that – will most probably be safer headgear for cricketers. That conversation has already begun in some circles.

Meanwhile, no one – including me – has been shy in admitting the uncontrollable tears shed for Hughes. When emotions are this overwhelming, one often finds there’s little else that can be done.

As the day draws to a close, I, like many, find myself thinking of Hughes’s parents and his siblings. His friends and his teammates. The millions this heartbreaking tale has touched.

I, like many, have taken to social media to find comfort in the touching words uttered from around the world.

Hughes’s death is not unique in its unfair and unjust nature. Such deaths are around us daily: the car accidents, the drownings, the sudden and terminal illnesses.

We’re all silently grief-stricken, as one writer once put it.

And yet the public nature of Hughes’s death – on a cricket pitch, on television, while he was padded and protected, by a ball which had only once before injured a player to this extent – is what has shaken us.

We will continue to collectively mourn for Phillip Hughes. We will all rave about the cruelty of his death. And then, the urge to keep going will kick in, and we’ll live our often-hollow daily routines.

But for now, there’s an uneasy comfort of belonging to a growing chorus of the raw emotion expressed. The feeling of being robbed, almost, by Hughes’s passing.

For now, we can weep and cry until we no longer cannot.

For now, at least, the feeling of being numb with grief can be the norm.