Angry protesters chant behind Sunrise on the Gold Coast 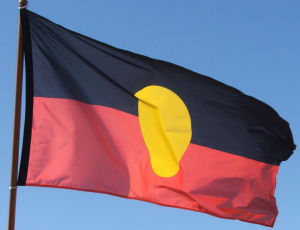 A group of at least 40 Indigenous Australian protesters have stormed Channel 7’s Sunrise morning broadcast from the Gold Coast beach.

The protesters appeared behind sunrise hosts Sam Armytage and David Koch chanting “Always was, always will be Aboriginal land,” and “Sam Armytage, we are still waiting on an apology.”

Hosts Koch and Armytage appeared visibly flustered by the chaos unfolding behind them, raising their voices to a yell in order to be heard over the roaring protests.

The program went to great lengths in an attempt to keep the peace and avoid repeating past mistakes made while covering indigenous debate.

Co-host David Koch said they were happy and willing to hear the protesters out, while remaining wary of their predominantly family-based viewership.

“We support and respect anyone being able to protest and get their view across. Happy to have them here, and to express their view, but we have to be a bit careful with language and aggression,” said Koch.

“As regular viewers would know, we have lots of families and kids here. It’s school holidays in Queensland, it’s the Commonwealth Games, and while we respect everybody’s right to protest … there are a lot of families on holidays.”

The protest follows on from the indigenous community’s anger at Sunrise‘s coverage of indigenous topics in the past.

However, many protesters were quick to point out that the issue went deeper than the indigenous community’s discontent with Channel 7.

“This is about us using the Games as a platform to remind everyone that they’re here on stolen ground, off the backs of colonisation.” one protester told news.com.au.

The police presence at the scene maintained that the group had the right to a peaceful protest and they weren’t required to intervene at this stage.

Eventually the elder in charge of the protest convinced the group to depart, and the protesters were soon replaced by smiling and waving families decked in green and gold.

This isn’t the first time that Sunrise has butted heads with the indigenous community.

Just last month, a segment aired on Sunrise covering the topic of indigenous adoption, which ignited the indigenous community’s anger towards the morning program.

The panel unanimously agreed that removing indigenous children from at-risk homes was a “no brainer”.

MacSween then proceeded to make the call for another Stolen Generation.

“Just like the first Stolen Generation where a lot of children were taken because it was for their well-being, we need to do it again,” MacSween said.

This sparked outrage in the indigenous Australian community, leading to a 100 person protest out the front of Channel 7 headquarters in Martin Place.

Matters were only worsened when Channel 7 made the call to block the protests from view using sound proof blinds and an edited overlay of a Martin Place backdrop.