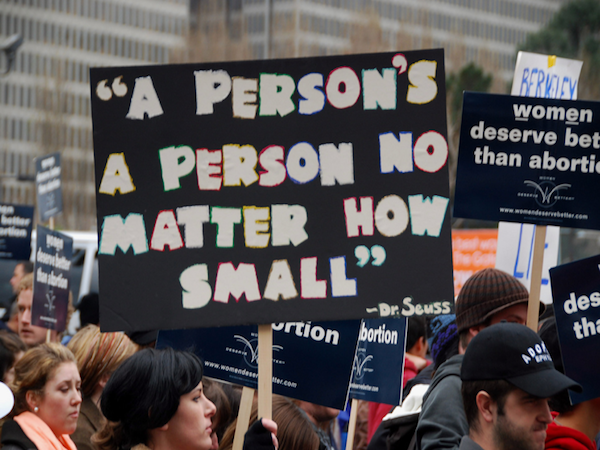 One in three Australian women will have an abortion in their lifetime. When they do, they will be faced with hordes of protesters exercising their right to free speech, fighting for the life of the unborn child.

Every few years comes media frenzy, a plea from an individual or a political agenda regarding the need for bubble legislation.

Tasmania is currently in the process of implementing new abortion legislation, which includes a provision for access zones. The bill was passed by the Lower House, with MP’s given a conscience vote.

Restricting certain behaviour within 150 metres of abortion clinics, the legislation will prohibit protesters from engaging in protests, harassment, intimidation, threats, filming a person and impeding access to the premises.

With this landmark bill has come a surge of support for a similar approach in Victoria, and an overwhelming response that it would obstruct the human rights of protestors.

So do we need bubble zone legislation or are protesters justified in their actions?

The world is engrossed in the gruesome details surrounding the trials of Kermit Gosnell and his accomplices. The US abortion doctor was found guilty of infanticide, for his barbaric practices including snipping the spinal cords of babies born alive.

Australia too, has its own deviant abortionist. Dr Mark Schulberg was struck off the medical register after prescribing addictive drugs to patients at his abortion clinic. Dr Schulberg’s clinic was also the scene for the anaesethist who infected 55 women with hepatitis C.

With such horrific cases rife in the media, many pro-life activists are crying out for the atrocities to cease and abortion to be made illegal to protect women and the lives of their unborn babies.

They protest to have their message heard, and why shouldn’t they? They have the right to free speech just like anyone else.

But hang on; think back to 2001 when a Melbourne security guard was murdered. Stephen Gordon Rogers was shot dead when a deranged pro-life activist embarked on a crusade to kill every staff member in the abortion clinic.

And then there are the stories of countless women every year being harassed for seeking medical treatment. Surely these instances warrant intervention.

It’s clear from both sides that this issue is emotive and riddled with grey areas.

The site of the infamous security guard shooting, the Fertility Control Clinic in East Melbourne, is a frequent target for zealous pro-life activists.

“They might be stalking women, walking up to them 50 metres from the clinic, handing out misinformation in brochures or blocking the entrance,” she said.

They shout slurs at women such as, “you’re a mother now, don’t kill your baby” to try to prevent them from going through with the abortion.

This is already an emotional time for women, and such abuse does nothing to alleviate the trauma.

A study of women visiting the clinic for an abortion conducted by University of Melbourne Masters student Alexandra Humphries showed that 80% of women encountered the protesters and those who did suffered significant feelings of guilt and shame as a result.

The protesters also used to target clinic staff, but Dr Allanson says they are less vocal now because they know the staff will take it further.

“But they know us by name – they’ll say ‘Susie, you shouldn’t be working in a slaughterhouse’ and ‘you’ve got blood on your hands,’” she says.

Dr Allanson is a staunch believer in the need for bubble zone legislation in Victoria, however, she prefers to call it “access zone” legislation.

“The focus remains on women accessing health care rather than excluding people from the right to protest,” she said.

Canada is one jurisdiction that has effectively adopted access zones to protect women. A study showed that the bubble zone laws implemented in the country significantly reduced protest activity or eliminated it entirely at every clinic where zones are in place.

Dr Allanson supports a similar approach and fervently denies that such legislation would restrict the right to free speech. However, a refusal to acknowledge flaws in the approach could appear as biased or short-sighted.

The right to free speech is one of the most valued rights in Australia. While not expressly protected by the constitution, we do have an implied right to political communication and it is expected that this right will be upheld in our democratic society.

Trudi Aiashi from 40 Days for Life says the group pray and fast twice a year outside the Fertility Control Clinic.

“Abortion is the most unnatural procedure for a woman to undergo and it has dire consequences,” she says.

“We hope to save women from this grief and pain by giving them an opportunity to consider other options.”

“It is our right as citizens to pray anywhere on the public domain provided we do not restrict movement,” she says.

If the protesters did not cross the line from free speech to harassment and their protests are indeed peaceful, it wouldn’t be necessary to create access zones. Unfortunately, the incidents at the Fertility Control Clinic demonstrate that protesters are unable to abide by a peaceful regime.

“No one has the right to protest anywhere they like, democracy is about balancing rights and currently the right to harass is being prioritised over women’s right to feel safe,” says Dr Allanson.

If women are to be protected, it might be time to lay down some lines.

Rachel Wagner is a fourth-year Bachelor of Law and Media Studies student at La Trobe University and a staff writer for upstart. Follow her on Twitter @rachelshae.