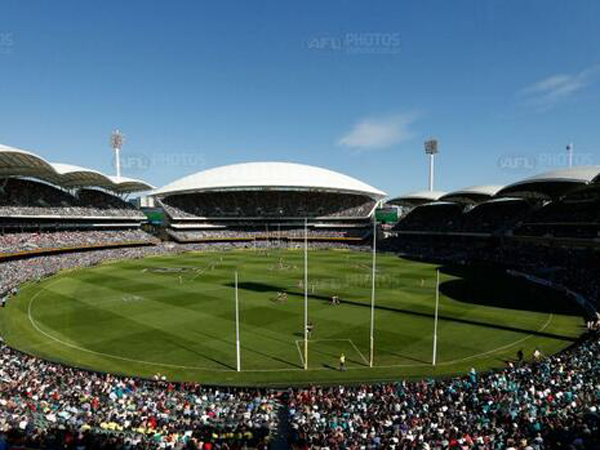 As dusk fell upon a warm Saturday in South Australia’s capital, it was clear that the redeveloped Adelaide Oval would be worth the outlay.

The 36th showdown between Port Adelaide and the Adelaide Crows was affirmation that the 53,000-seat stadium, finished just days ago, marked the beginning of a new era.

The plaster shards and paint spillages lying on the floors of the Eastern Stand had to be forgiven – as did the few stickers remaining on the base of some of the glasses in the function rooms.

It was an event of such zeal and electricity that Adelaide not only appeared reinvigorated – it felt it.

Walking the length of King William Street around midday, taking a left onto North Terrace via Rundle Mall and the East End, the sense of excitement around the city was rife.

You couldn’t help but think: “Haven’t they done this right?”

To dismiss the stadium as merely an assortment of cement and grass ignores the incredible impact it is destined to have on the city.

Not only will the Oval change the way Adelaide operates, it will give it far greater appeal both interstate and internationally, as well as benefit local businesses.

A spokesperson for the South Australian government said the transition to Adelaide Oval would bring substantial gains.

“While Football Park (AAMI Stadium) served us well, a modern city needs to provide people with the opportunity to attend a world-class stadium that is convenient, because we know the great benefit that this brings,” the spokesperson said.

“This means more jobs in the stadium as well as opportunities for the cafes, bars and restaurants in the CBD that will also be given a lift from the increased patronage at Adelaide Oval.

“Each weekend for 20 weeks of the year, we will have hundreds, if not thousands, of interstate visitors coming to Adelaide and this will provide a huge economic boost for Adelaide and our regions.”

One of the big things about Adelaide Oval redevelopment was injecting cash and life into CBD economy. Place is going off. #itworked @afl

The businesses lining North Terrace have now been brought into focus with the construction of the Riverbank Footbridge, as have the riverside cafes beneath the Festival and Convention Centres.

Previously, they were an afterthought. Nobody saw them and worse yet, few probably even knew they existed.

Sarah of Regatta’s Bistro tells upstart she was in the middle of the busiest Saturday lunchtime shift for a long while when the AFL rolled into town.

“That’s definitely why it’s so busy, it isn’t usually like this,” she says.

She thinks that the football attendees are going to create a newfound competition between businesses along the same strip.

“There will be a boost in business over the weekend, for sure. But now it’s about finding a point of difference to set us apart from the rest. It’s great for the city nevertheless,” she says.

As brilliant and modern as this new stadium is, the feel of the old Adelaide Oval is still well and truly entrenched.

The foundations of the Oval’s first ever Western Stand have been restored and incorporated into the new design; the open garden separating the southern end from the eastern wing pays homage to the old Oval, while the statues of past football and cricketing heroes are a nice finishing touch.

Perhaps most iconic, though, are the hill and its famous scoreboard. That these features have not only been retained, but emphasised, should be rapturously applauded.

The result of one Showdown was an after-thought on a day that saw both the city and state take a big stride forward.

All of a sudden, Adelaide appears far more vibrant and progressive.

Perhaps now, the ‘City of Churches’ will be renowned for something else.