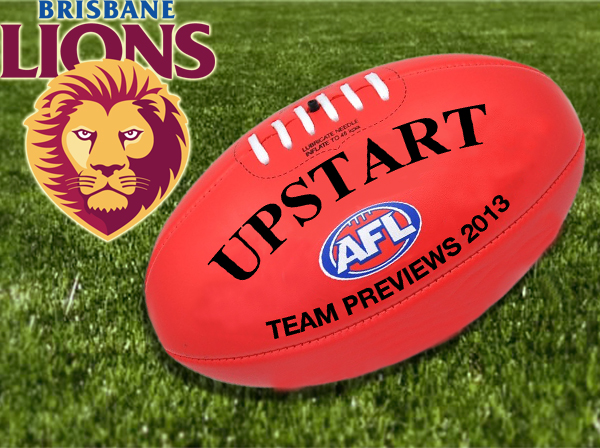 Recent seasons have been about rebuilding and recovery for Michael Voss’ Brisbane Lions. After their disastrous attempt in late 2009 at adding senior players to their list in the hope of pushing for a premiership, Voss and co. will be hoping that their subsequent struggles have finally passed.

The Lions showed some improvement last year, climbing above the cellar-dwellers to join the logjam of teams chasing for the bottom of eight. With the off-season additions of former Melbourne duo Stefan Martin and Brent Moloney, Brisbane continues to build its depth, particularly in the midfield.

With Moloney joining the likes of Daniel Rich, Tom Rockliff, tackling machine Jack Redden and the ageless Simon Black in the middle, the Lions have the ability to match it with most teams where it counts. Irishman Pearce Hanley’s kicking and run off half-back was impressive in 2012 and youngsters Claye Beams, Dayne Zorko and Mitch Golby’s development will add to the midfield rotations that have become so crucial of late.

It is up forward that the Lions have their biggest issue. They are desperate for other talls to take some of the load off their skipper, Jonathan Brown. They were forced to move Daniel Merrett, one of the better defensive stoppers in the league, into a key forward post last year, occasionally leaving them exposed down back. Should Merrett return to his traditional role, they’ll need at least one of Martin, Jordan Lisle, Patrick Karnezis or the slightly smaller Aaron Cornelius to offer a serious goalkicking option.

Todd Banfield and Josh Green have added pace and forward pressure, and draftee Sam Mayes is highly regarded. In Martin, Merrett and Lisle the Lions are blessed with versatility, with all three capable of playing at either end.

Ruckman Matthew Leunberger may hold the key to the their success in 2013. A mobile, free-roaming ruckman who can hit the scoreboard, the 24-year-old has modelled his game on West Coast’s premier ruckman Dean Cox. Capable of winning plenty of his own ball, he played only three games in 2012 as an achilles injury cruelled his season.

If he can string together a complete season, the competition might just see the emergence of the next elite ruckman. Expect him to receive support from Martin and the developing Billy Longer.

Circle it on the calendar: Round three, Gold Coast vs Brisbane

The evenness of the competition means that positions 6-12 on the ladder will be decided by a handful of matches, particularly those against similarly positioned sides. Brisbane are likely to be competing with the likes of Essendon, Carlton, Richmond and St Kilda in hoping to leap into the eight.

With that said, the local ‘QClash’ derby against newcomers Gold Coast, holds plenty of weight for the Lions. Having dropped the inaugural battle between the two, the Lions sought to square the ledger in recent encounters. Two wins from their matches this year  will certainly help their push for finals.

After finishing 13th last season, expect Brisbane to improve their football this year. While they are amongst the most hotly contested group of teams, they should improve on their 2012 standing and could easily be among the finals race come the latter stages of the season.