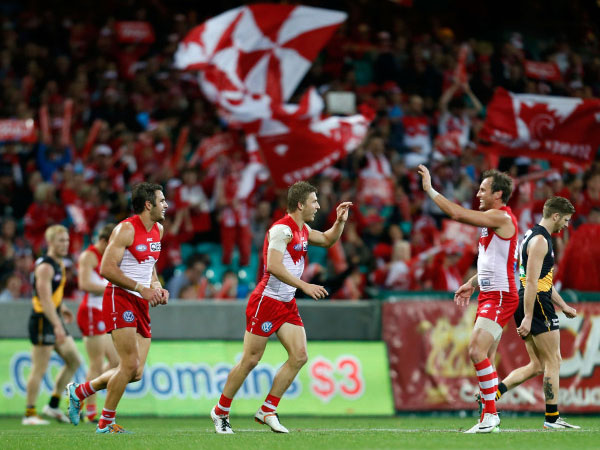 It’s been another terrific year for Sydney.

Following on from last year’s Grand Final triumph, the AFL’s reigning premiers are well on track to repeat their success. The Swans finished in fourth place at the end of the home-and-away season, notching up 15 wins along the way.

John Longmire’s troops were fantastic at putting teams to the sword when they got on top. They racked up some very impressive winning margins, including 47-point victories over fellow finals-bound opponents Richmond and Collingwood.

This was partly helped by the number of times Sydney players got their hands on the ball. Daniel Hannebury, Kieran Jack, Jarrad McVeigh, and Josh Kennedy were all some of the league’s highest ball-getters.

However, injuries to key players will dampen the hearts of the Sydney faithful. Long term injuries to Adam Goodes, Sam Reid and Rhyce Shaw forced a reshuffle of the team, while other big name players like Lewis Roberts-Thomson and Lewis Jetta will all likely miss the Swans first final against Hawthorn.

Sydney’s strengths lie in its run-and-carry style of play. The Swans rank third in the number of handballs, and eleventh in the number of kicks. Incredibly, Sydney lie 18th in the total number of marks. This is because Longmire’s style of play sees the Swans outrun their opponents by wearing them down, while keeping the game tight. Sydney’s defenders are not afraid to run the ball out of the backline, while quick handballs throughout the midfield see the Swans easily take the ball forward. If the Swans can force their opponent to play the way they want, they will be very hard to beat.

Sydney’s biggest weakness is its failure to manufacture a single win against any of its top four rivals. The Swans lost to Hawthorn twice this year (by 37 points and 12 points respectively), twice to Geelong (21 points and 44 points respectively), and its match against Fremantle ended in a draw. Sydney was 27 points up mid-way through the final quarter, against the Dockers, but in the end it was a Sam Reid mark in the dying seconds of the game that earned the Swans the two points.

Another weakness has been the loss of dual Brownlow medallist Adam Goodes, for the first few weeks of the finals. Goodes has been out since injuring himself in Sydney’s round 13 clash against Port Adelaide, and is expected to be 1-2 weeks away. With the Swans playing Hawthorn straight up, they will need their players to step up and fill the void that Goodes has left.

Ryan O’Keefe’s ability to chase down opponents and hold them in crunching tackles is a feature of his game. In fact, this is where O’Keefe stands above all; his tackling is second to none. O’Keefe’s average of 6.8 tackles a game is the best in the league, and he sets the example for his fellow Swans to follow. If O’Keefe is able to maintain his intense pressure he will go a long way to helping Sydney achieve back-to-back premierships.

The Swans will go into the finals with the knowledge that they have done it all before. While their first match against Hawthorn is certainly a tricky one, Sydney lost by two goals to the Hawks last week, with a number of its key personnel out. That was a good trial run for them, and John Longmire will have certainly picked apart where the Swans fell down in that match. With the likes of Jetta and Goodes to return, don’t be surprised to see Sydney there on the last Saturday in September.

Paddy Naughtin is a third year Bachelor of Journalism student at La Trobe University, and upstart’s sport editor. You can follow him on Twitter here @PaddyNaughtin.