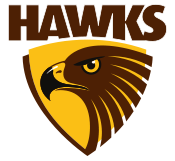 Minor premiers Hawthorn will be pursing its 11th VFL/AFL premiership in this Saturday’s grand final against Sydney, and they certainly have been made to earn their place on the biggest stage.

Following their fully deserved semi-final week rest period, Hawthorn faced Adelaide in a home preliminary final. The match was widely expected to be heavily one-sided, but the Crows had other ideas.

Adelaide served up a superb contest to their more fancied opponents, so much so that Graham Johncock’s late fourth quarter goal put the Crows ahead and in pole position for a famous underdog victory.

But when it mattered most, Hawthorn’s cream rose to the top and answered the challenge. Cyril Rioli was awe-inspiring as Hawthorn narrowly outlasted Adelaide’s gallant fight by five points. The match was remarkably similar to the 2007 preliminary final between Collingwood and Geelong, which ended with the same margin and featured similar circumstances.

Captain Luke Hodge is expected to return to Hawthorn’s lineup having recovered from an illness, and is likely to replace defender Thomas Murphy.

How Hawthorn can win

Hawthorn has several elite performers that can produce unstoppable, match defining bursts. On grand final day, the value of that game changing ability increases tenfold and can yield glory – former Hawk Stuart Dew’s brilliant third quarter in the 2008 grand final is exhibit A.

Lance Franklin and Cyril Rioli are the most prominent examples of ‘x-factor’ with their speed, elusiveness and mercurial goal sense making them forever dangerous. Franklin and Rioli consequently take most of the spotlight, yet the likes of Luke Bruest, Jack Gunston, Shaun Burgoyne and Matthew Suckling, amongst others, are also capable of quickly and sharply altering the course of events.

If any of Hawthorn’s stars get off the leash, they are likely to wreak premiership winning havoc on the Swans.

In their qualifying and preliminary finals, Hawthorn kicked 20.15.135 and 13.19.97 to overpower Collingwood and Adelaide’s quality defensive units.

The Hawks 116-point finals average is considerably better than Sydney’s (83.5), although the Swans have only conceded an average of 57.5 points in their two finals clashes. The statistic suggests that Sydney are the best equipped of any side to restrict Hawthorn, but that doesn’t mean they necessarily can or will.

The Hawks have attacking weapons everywhere.

Hawthorn are number one in the competition for points scored and given the vast array of names mentioned, you can understand why.

On this basis, the fate of the match appears to rest in Hawthorn’s hands more than Sydney’s.

How Hawthorn can lose

Attack wins games, defence wins premierships. Hawthorn’s front-half presence has been dominant, but their defensive structures remain their achilles heel and could cost them the ultimate prize.

Josh Gibson is regarded by many as the best spoiler in the league, but he and fellow negaters Ryan Schoenmakers and Ben Stratton can still be unconvincing when engaged in one-on-one battles.

Schoenmakers in particular has looked shaky. Travis Cloke kicked six goals against him in the qualifying final, while Adelaide’s Taylor Walker and Kuyt Tippett combined for eight goals and 18 marks last week.

Conceding 97 and 92 points in finals matches puts significant scoreboard pressure on the forward line – pressure the Hawks forwards have handled with aplomb to date. However, if Adam Goodes, Sam Reid, Lewis Roberts-Thompson and the like own their offensive posts, Hawthorn may finds themselves in trouble.

Sam Mitchell’s performances in September are exceptional and hardly surprising given his contested style of play. He wins his own ball consistently, is equally capable of distributing with left or right foot and brings his teammates into the game.

There are two major factors that elevate Mitchell to champion status and could win him the North Smith medal – vision and execution. Mitchell isn’t blessed with an outstanding leap or pace, but he makes up for those deficiencies with his ability to find space, recognise his target and execute the skill.

On that point, Mitchell is one of the best handballers in the competition, an aspect that rarely receives the attention and accolades it deserves.

Regardless of the result, Mitchell is likely to have a significant influence on the match.

In a beautiful piece of football irony, former Hawthorn player Josh Kennedy could be the catalyst for the Hawks grand final demise. Since arriving at Sydney in 2010, Kennedy has finished top three in the Swans best and fairest award each year.

He is powerful, tall for his position, strong in the contest and a quality ball-user. In the two meetings between Hawthorn and Sydney this season, Kennedy accumulated 62 possessions, four goals and 17 tackles.

Due to his no nonsense, hard working style, Kennedy is borderline impossible to contain with a tag. Therefore, expect the likes of Lewis Jetta and Adam Goodes to receive greater defensive focus.

Hawthorn’s only chance to quell Sydney’s star is to beat him and his Sydney teammates at the coalface – stoppages. If they do somehow manage to curtail Kennedy, a feat rarely achieved this season, Hawthorn will almost certainly be holding the cup aloft.