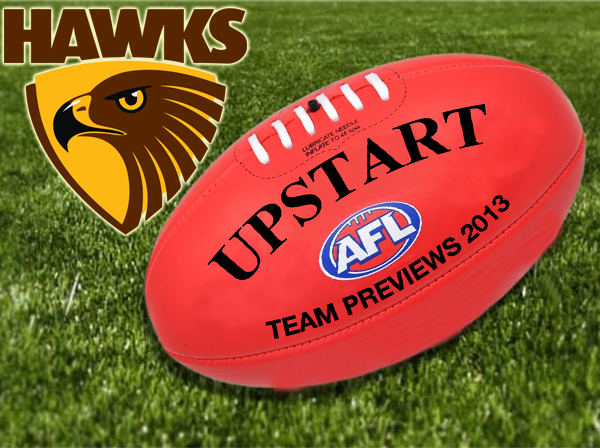 As good as the Hawks were in 2012, they must improve again if they’re to go one step further in 2013 and win the club’s 11th premiership. They will have their work cut out for them right from the get-go – playing all other 2012 finalists in their first seven games. The good news for Hawthorn fans is that their side has the capacity to improve again in 2013.

Successful sides are often reluctant to make too many changes from one year to the next, for fear of tampering with both the chemistry and tactics that brought success in the first place. But the Hawks, under coach Alastair Clarkson, have never been afraid of tweaking elements of their game plan.

Remember 2008’s ‘Clarko’s cluster‘ or in 2011 when the Hawks daringly chipped the ball through opposition zones? (Which were in vogue largely thanks to the Hawks’ success using zones in 2008). Or last year, when opposition teams began playing man-on-man again, and the Hawks changed tack yet again, switching the ball across halfback and then kicking long?

Under Clarkson, the Hawks need not be concerned that their game-style will be exposed, as was the case with Thompson’s Cats in 2010, and to a lesser extent Malthouse’s Magpies in 2011.

In terms of personnel, the Hawks’ list is in pretty similar shape to last year; the only real difference is the backline. The loss of Clinton Young to Collingwood via free agency was unfortunate, but – let’s face it – the Hawks aren’t lacking mid sized flankers with elite foot-skills. Hawthorn also lost Stephen Gilham and Tom Murphy during the off-season, but will benefit enormously from the recruitment of Brian Lake from the Western Bulldogs.

Lake will provide the Hawks with a genuine full-back – something they’ve lacked since Trent Croad retired in 2008.  You need only to look at the amount of contested marks Brian Lake took in 2012 – only 15 players in the league took more, of which only two were defenders – to realise that Lake is much more than another defender to go third-man-in. That role will be left to the gallant, but undersized Josh Gibson, who along with Ryan Schoenmakers, will relish some extra support.

The addition of Lake will also provide physicality and aggression in a back-line that has recently been filled with silky players, rather than the ‘unsociable Hawks’ we saw in 2008. Brent Guerra and captain Luke Hodge – who both had injury-interrupted seasons last year – will be expected to fill the void left in the backline by Clinton Young and Matthew Suckling.

Suckling will miss 2013 due to a knee injury. Hodge and Guerra kick the ball as well as Young and Suckling – who both kick at an elite level – but will add some toughness to the Hawks’ defence as well.

Hawthorn’s forward line is still the best in the AFL, thanks to Lance Franklin, Jarryd Roughead, Cyril Rioli, Jack Gunston, and Luke Breust. Providing Franklin keeps his mind off contract talks, the Hawks’ forward line will again cause plenty of headaches for their opposition.

If there is a weakness in the Hawks’ list, it’s midfield depth. There is plenty of quality and grunt at the top end, with Sam Mitchell, Brad Sewell, Jordan Lewis and Luke Hodge (when fit) leading the way, but these players lack the support that the likes of Sydney, Collingwood and West Coast have around the ball. The Hawks would love Isaac Smith, Liam Shiels and Bradley Hill to take their games to another level this year.

With their backline bolstered by the recruitment of Brian Lake, the biggest challenge for Hawthorn in 2013 will be to add leg-speed to its midfield, without compromising its physical strength around stoppages. Now in his sixth season, it’s time the mercurial Cyril Rioli plays a full year in the midfield, where his creativity and line-breaking speed are most valuable.

In 2012 he averaged just over 15 possessions per game. Last year’s preliminary final win against Adelaide showed how influential he can be when he racks up more than 25 touches.

Circle it on the calendar: Round 21, vs. Collingwood

With many expecting Collingwood to improve in 2013, this match shapes as a possible grand final preview; just weeks out from the finals. Expect a crowd of more than 80,000 at the MCG, and high stakes – such as home finals or top-four berths – to be on the line.

The ‘if they can stay fit’ line is one that is often bandied around, but it is particularly pertinent with Hawthorn. The Hawks have the highest top-end talent of any side in the league, but their lack of depth cost them a premiership last year. That depth is already being tested, with a number of key players missing from last year’s side.

If the Hawks can stay injury free when it matters, they are as good a chance as anyone of winning the premiership. But their list is ageing. For Hawks fans, this is the scary element. If the Hawks don’t win it in 2013, it’s hard to see how they could win it in 2014.

Sam McInerney is Upstart’s Deputy Sports Editor, and is studying a Postgraduate Diploma in Journalism. You can follow him on Twitter: @SamuelMcInerney