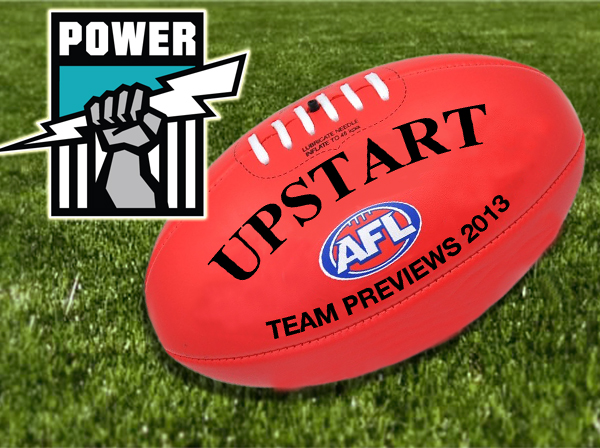 A host of younger players are beginning to rear their heads to take the club further. Newly appointed skipper, 24-year-old Travis Boak, is hitting the prime of his career, while Brad Ebert and Hamish Hartlett are gaining recognition around the league. The problem for Port is their inability to keep players at the club.

Troy Chaplin to Richmond, Danyle Pearce to Fremantle and David Rodan to Melbourne have left for greener pastures, creating big holes in a side that needs valuable experience. However, the influx of recent young talent and the addition of skilled half-forward Angus Monfries from Essendon should propel them back into finals contention within the next few years.

Chad Wingard showed glimpses in 2012, and new recruit Ollie Wines looked sensational during the NAB Cup. Plus, a few unheralded names are starting to push for senior selection. Sam Colquhoun is making a name for himself at the club, after being selected in the Under 18’s All-Australian in 2012, while Kane Mitchell is coming off one of the best individual seasons ever seen at WAFL level. Nevertheless, don’t get too carried away with Port Adelaide this year, as they continue to put game time into an inexperienced list.

Jackson Trengrove is the shining light for a team that struggles at the defensive end of the ground. Port’s best and fairest winner in 2011 is extremely important for their structure, and his sheer determination and attitude is a focal point in an inexperienced side.

Despite being agile enough to play around the ground, a permanent defensive post is where we should see Trengove in 2013, where he can use his athleticism and notable work rate to shut down the opposition’s best forward. At 22 years of age, he is already showing ample signs of developing into one of the best key backs in the league.

He is touted as a leader at the club and there is no doubt Port Adelaide is a better side when he is playing week in week out.

The ‘showdown’ is a fantastic spectacle and is always of great importance and meaning to those involved. There is perhaps added significance to the 2013 versions, even more than the past few seasons.

Twice last year the Crows got a hold of Port and beat them by comfortable margins, including a 58-point drubbing in round 15. It was the first time since the Power’s grand final season in 2007 and only the third time since their inception into the league in 1997 that they failed to win a game against their old foes during the season.

Given the Crows placed top four in 2012, and will probably be thereabouts again this season, who better to test how far Port have developed than against a powerful and hated adversary.

Port shouldn’t perform as poorly as they have in recent seasons, but still be in the lower portion of the AFL ladder. They’re still a developing side looking to find its best 22, so any improvement on last season can be deemed a success as far as their 2013 goals are concerned.

With the addition of a new coach comes excitement and enthusiasm, but the fact remains that the Power don’t have the quality personnel to go much further than 12th this season. Whilst they’re on the right track, 2014 is realistically where Port Adelaide could come into finals contention once more.

Robert Beaton is a year Bachelor of Journalism (sport) student at La Trobe University. You can follow him on Twitter: @BobbyBeaton16