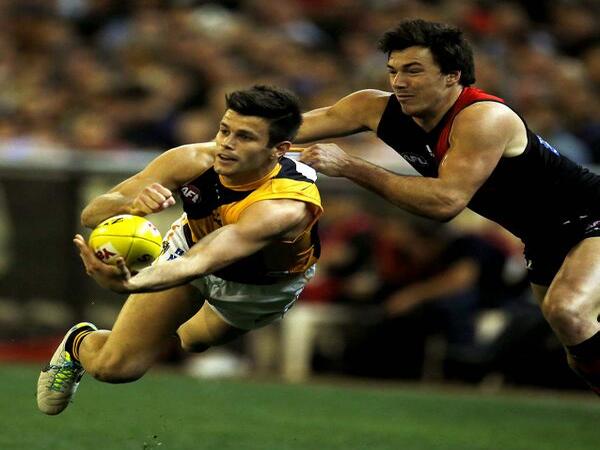 In the final True Ladder of the season, Collingwood’s loss sees it drop to sixth, where it has replaced Richmond. Essendon remains at seventh, while a poor finish to the season sees West Coast finish in 15th place.

While they will be nervous about the Lance Franklin report, the Hawks secured a mental advantage by beating Sydney in preparation for their return leg on Friday night. When the game was being decided in the final quarter, the Hawks stood up and won it. The Sydney match was Hawthorn’s 19th win this season. Only four teams have won 19 games in a season since 2001, and of those only one has gone on to claim the premiership. Will Hawthorn be the second?

Perhaps with one eye on next week, Geelong looked a little sluggish on Saturday afternoon. The Cats struggled to stop the Lions’ offence, but by kicking 22 behinds the Cats squandered far too many opportunities. Geelong will hope that its performance was just a one off as it approaches September, starting with a qualifying final against Fremantle.

By dropping 10 players from the previous week, it was apparent that Fremantle was more concerned by where it is playing in the finals, rather than round 23. The Dockers were not interested against the Saints, and clearly are more focused on facing the Cats on Saturday afternoon.

Sydney is the hardest team in the top four to gauge. While its reputation suggests that it will be hard to beat in September, the Swans bring in some indifferent form. Whether it was because they were missing Dan Hannebery and Kurt Tippett, or not, the Swans went down to the Hawks on Friday night. Those two teams meet again this Friday at the MCG.

Richmond had the perfect preparation for finals football by cruising to a bruise free victory against Essendon on Saturday night. The Tigers appeared more focused on getting through the match without injuries, and apart from a slight concern with Matt White, they achieved that objective. Aaron Edwards picked the right time to cement his position by kicking four goals in an impressive performance. Richmond will meet Carlton on Sunday in an elimination final.

Collingwood will be disappointed with its loss to North Melbourne on Sunday. The Magpies couldn’t defend against the Kangaroos all day, and suffered injuries to Nathan Brown and Quinten Lynch. Collingwood hosts Port Adelaide on Saturday night, and will need a better defensive effort across the ground to achieve victory.

Finally, the 2013 season is officially over for Essendon. Most fans will be happy to forget what has happened this year, but the perseverance the Bombers showed on field was excellent. Without early draft picks, Essendon will need to put in some work at the trade table to improve its list in order to enter premiership contention next year.

For the first three quarters Port Adelaide cruised to a 29-point lead and looked like its was fine-tuning for finals. In the final term however, the Power stopped running and let the Blues dictate the play, which lead to a very disappointing loss. If it is to upset Collingwood on Saturday night, Port Adelaide needs to put in a solid four-quarter effort.

Again North Melbourne played like a side that should be approaching the top four instead of finishing outside the finals. The offensive threat of the Roos was on display, and the Magpies were powerless to stop it. However, North still let Collingwood have 29 shots on goal, revealing its defensive issues. If it’s going to play finals in 2014 North needs to work on its defence, because its offence is certainly not the issue.

Even coach Mick Malthouse is unsure that they deserve it, but the Blues will be playing finals this season. The Blues fell in to the eight on the back of a pulsating comeback against the Power, kicking eight goals in the final quarter to pull off an unlikely victory. Carlton will now prepare for a blockbuster elimination final against Richmond on Sunday – a team they defeated only three weeks ago.

Brisbane wouldn’t have made the finals, but for a period it would have felt that a missed holding the ball decision cost it a chance to play in September. The Lions missed a chance to finish their season on a high, but, on the positive side of things, their second half of the year has seen a marked improvement, providing much optimism for next year.

With a crushing victory over the Eagles, the Crows finish their season on a good note. Adelaide was expecting big things this time around and fell well short of it’s dreams, especially after losing in a preliminary final last year. Losing Kurt Tippett in the off-season and Taylor Walker mid season to injury, the Crows stagnated in their forward half and lost confidence as the season wore on.

The Western Bulldogs finished off its season with a victory against Melbourne, saying goodbye to club stalwart Daniel Cross in the process. After appearing lost during the first half of the season, the Dogs finished the season with strong form showing that their future is bright and their young players have a lot of potential.

After winning a combined six games in their first two seasons, the Suns won eight this year in a very successful campaign. The club’s young players like Dion Prestia and Jaeger O’Meara have begun to mature for the Gold Coast, as evidenced by their thumping win over Greater Western Sydney on Sunday. The Suns will hope that their list continues to improve, and will look to trade for a key forward in the hope of pushing for the top eight next year.

A horror finish ot the year will leave the Eagles disappointed with their season. By averaging only 41 points in the final three rounds, West Coast fell in a heap, raising doubts about John Worsfold’s future at the club. West Coast has a lot of work to do to climb back up the ladder in 2014, after being arguably the most disappointing team of the season.

Although it faced a depleted Fremantle, St Kilda enjoyed a feel good victory on Saturday. In a farewell to veterans Jason Blake, Justin Koschitzke and Stephen Milne, the Saints ran all over the Dockers. Both Leigh Montagna and Jack Steven collected an unbelievable 47 possessions, as St Kilda finished off a painful year of rebuilding by winning its final two games.

It was the end of a season from hell for the Demons. Melbourne went down to the Western Bulldogs in a competitive match, with Jeremy Howe making a last ditch effort for mark of the year. The Demons appear to be closing in on convincing Paul Roos to coach the club next season, and will be hoping to recruit some young stars in the draft.

In Kevin Sheedy’s farewell game as coach, the Giants suffered a big loss to the Suns. The 2013 season has proved to be a forgettable year, as GWS searched for consistency within its young list. With the possibility of recruiting Lance Franklin over the off-season, the Giants will be looking to become more competitive come round one next year.

Josh Barnes is a first-year Bachelor of Journalism (Sport) student at La Trobe University. You can follow him on Twitter at @barnseyy.