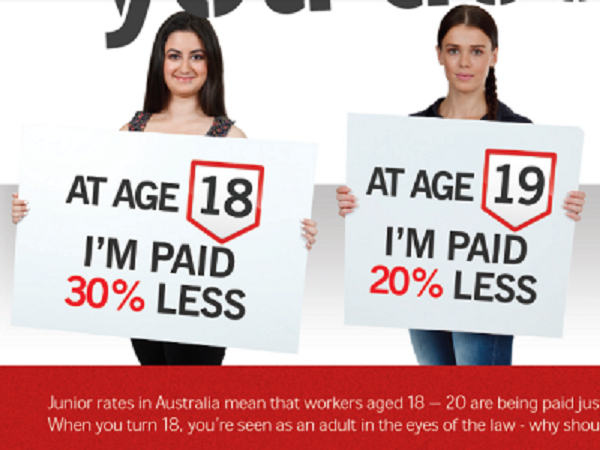 Young people around Australia have decided to reject unfair pay, just like the activist monkeys filmed above.

While they’re not exactly throwing their pay checks back at their employers, young adults are supporting the 100% Pay at 18+ campaign spear-headed by the SDA union.

People between the ages of eighteen to twenty, who perform the same work as adults, are currently paid a percentage of the adult wage and this new campaign is aiming to level the playing field.

The case is currently being heard in the Fair Work Commission, looking specifically at the General Retail Award. With almost nine thousand supporters and growing, organisers are hoping to soon get political figures on board.

“We’re currently calling on Minister for Workplace and Employment Relations Bill Shorten to support the current case in the Fair Work Commission as the first step in a staged approach to providing full rates of pay for all adults” says De Bruyn.

And why shouldn’t people aged 18 and over be considered adults in the work place?

Young retail worker Rachelle El Hage argues she is equal before the law but not in the workplace.

“Now that I’m 18 I can drive, vote, drink, pay rent – the law treats me like an adult, so I don’t see why my employer should be any different.”

Executive director at the Australian Retailers Association, Russell Zimmerman, has told The Australian that the retail sector had been under significant stress and could not afford to take on 18 to 20-year-olds at higher pay.

While this may ring true, particularly for small businesses, the initial pay rise of 10 per cent would only apply to 20-year-olds. De Bruyn told The Australian that the pay rise for 18 and 19-year-olds would be phased in later to reduce economic impact.

De Bruyn also says that adult wages for 18 to 20 year olds were introduced in New Zealand years ago with no detrimental impact on businesses.

While a pay rise could see businesses avoid hiring youngsters, from a young adults point of view, the pay rise is justified. Just as adults have many financial commitments, people in this age group do as well.

According to the ABS, more than one-quarter of men (29%) and women (28%) first moved out of home when they were aged between 18 and 20 years. The most common reason given for leaving home at this age was a desire to be independent.

So it must be asked: how can people of this age group afford to live as independent adults if they aren’t paid as adults?

This may also explain why almost half of people aged aged 20–24 who have never left home said that the main reason was financial, because in the early stages of their adult life, they are still paid as a junior.

The concern of fair pay can lead to issues much deeper than money and living at home. Having a job gives people the freedom and independence to be happy, healthy and social.

20 year old, Tamara Girdwood has been living out of home for the past year.

“I find myself getting sicker more often, luckily we have bulk bill doctors. At one point I was living with a family who pushed me to my limits mentally and physically I was considering living in my car until I found another friend or got a house of my own. I also found myself losing friends because I couldn’t go to all the functions I was invited to and lost contact for periods of time.”

Tamara is just one among many young people trying to make the leap into adulthood.

Tom Dean has been trying to support himself since the age of 18 and says it was tough at the best of times. He too had to skip many social events and became unhealthy because it was difficult to afford nutritious food.

“I never went to social occasions until this year because I didn’t have money. If I did go out, I would just drink water or rely on the pity of the barman to give me a free coke. I also became really unhealthy, losing a lot of weight because several times I couldn’t afford food.” says Tom.

The campaign is aiming for pay to be based on workplace contribution, rather than the age of the employee.

“The days when you weren’t considered an adult until 21 ended decades ago. It’s time for retailers to move into the 21st century and start paying workers the wage they deserve.” concludes De Bruyn.