Taekwondo is not merely a sport for Carmen Marton – it’s a way of life.

The 25-year-old black belt from the Melbourne Taekwondo Centre will be Australia’s sole female representative in the sport at this year’s London Olympics. 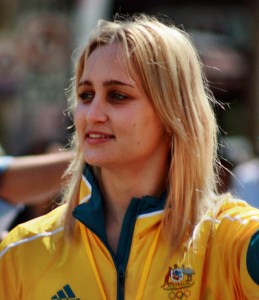 Softly spoken off the taekwondo mats, in her element she kicks, punches and when the opportunity presents itself, knocks her opponents out.

Introduced to the martial art by her father, and former taekwondo champion, Andrew Marton as a way to drag her away from the television, Carmen soon fell in love with the sport. And only six years later at the age of 14, she was selected for the national squad.

‘I am very grateful to him for encouraging me to do something different and to be the best I could be,’ says Carmen. ‘It was him who instilled those values of dedication, self-belief and resilience in me from the very beginning.’

The South Korean martial art is based around trying to land tactical kicks and strikes to an opponent’s head and torso. Fighters wear protective guards to their head, shins, feet, hands and groin. Nevertheless, the 25 year old has seen her fair share of injuries, both to herself and direct opponents (en route to qualification, she knocked out an opponent cold with her heel).

‘I have had a broken arm and broken hand, but after having operations they were quick to heal,’ says Carmen. ‘As an athlete you have to do the right thing: taping, ice, physio…There’s no way out of it – you have to take responsibility for your body.’

London will truly be a family affair for Carmen, with fiancé Safwan Khalil Australia’s only male representative, and future brother-in-law Ali Khalil is Olympic and National coach. Having met Safwan at a Junior World Championship in Greece ten years ago, Carmen could not be happier to share her second Olympic games with her husband-to-be.

‘Professionally and emotionally it is great. I love being surrounded by his hard working attitude – it’s contagious! It’s definitely a bonus to have someone you love involved in the sport who can empathize and pick you up when you are down.’

Extraordinarily, Carmen and Safwan’s journey to the Olympics has predominantly been funded through donations and sponsors. As a low profile sport in Australia, it received no government funding. And in-between traveling and competing, they both juggle full time jobs.

‘It has been very difficult to be honest,’ confesses Carmen. ‘It’s frustrating to lose a lot of energy having to focus on that aspect when we’d much rather be solely focusing on our training and preparation.’

But having to self-fund their journeys has been a motivating factor, to ensure they most of their opportunity.

‘If all goes well, it will be worth it and feel even more special knowing how hard we’ve had to work for it,’ she says.

Despite a hectic schedule based around intense training and competing overseas, Carmen is not one to forget where she came from. Having paid visits to interclub competitions, she has also been able to share a few words to those who are now in the same position as she was ten years ago.

‘She’s always been a role model, not just to me but my teammates,’ says  14-year-old Australian representative Askin Ovali. ‘She’s taken up a sport, set goals and has been able to reach the highest levels.’

Ovali recently fought in the Junior World Championships in Egypt, ironically enough in the same division as Safwan is fighting in London.

‘I’ve only met Safwan recently and he’s had a big effect as he’s in my division. It gives me a benchmark to aim at but also gives me butterflies in my stomach seeing how good he is,’ says Ovali.

A veteran of the sport already, Carmen has seen her beloved sport revolutionised by technology, with London being the first Olympics adjudicated by electronic sensors implanted in competitors’ torso shields.

Having finished in ninth at the Beijing Olympics, Carmen told Samantha Lane she sees no reason why she can’t go all the way this time around.

‘I’ve never believed that anyone’s better than me, because I think when you start doing that you’ve already lost the fight.’

Kevin Cheong is a 2nd year Bachelor of Journalism Student at La Trobe. You can follow him on twitter here.