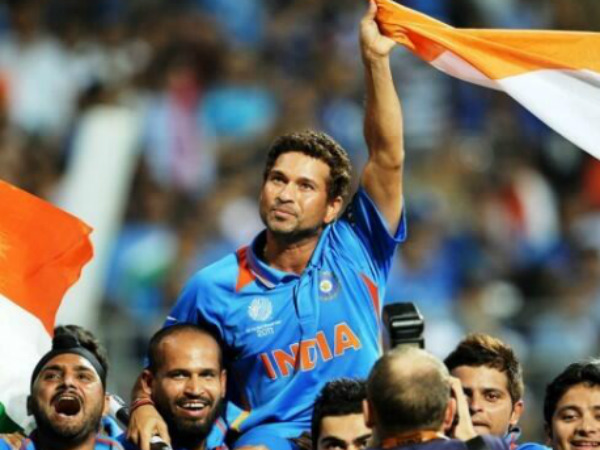 Longevity is just one measure of an athlete’s success.

But for Sachin Tendulkar, his longevity represents continued and unmatched superiority.

India’s little master has played more matches, scored more international runs and batted in front of more people than anyone else who has played the game.

But his career isn’t just numbers on a sheet of paper or figures on an Excel spread sheet. His 200-Test career – which will come to an end next month – is phenomenal not just because of the sheer number of matches he’s played, but how he has played them.

His craft is orchestrated with complete balance and an unblemished straight blade. Shuffles and triggers are deemed surplus to the cause. At his peak, he could play all around the wicket, so much so that he never truly had a trademark shot unlike, say, a Gilchrist pull shot or a Ponting drive. As he was so adept at all of them, picking one over the other is like trying to choose your favourite art gallery in Italy.

But try as we might, even the most advanced adjectives in the English language can’t do justice to Tendulkar.

Yet journalists, pundits, and a few million others will attempt – and so they should – to condense a career into words which began five years before Ashton Agar was even born, and has spanned across four decades.

Tendulkar wasn’t classy as Mark Waugh was polished, carefree and laconic. He was never as cavalier as Virender Sehwag, but nor was he dour like Geoff Boycott, or rigidly efficient in the manner of Rahul Dravid or Allan Border.

He was somewhere in between, stylistically with the masses.

Yet somehow he separated himself from the pack, not through an excess of athleticism like Michael Jordan, or mind-boggling skill, like Lionel Messi, but via the purest form of classical technique.

“It’s not just the talent he was born with but what he did with it,” said former Indian test cricketer Sunil Gavaskar.

In 2002, 11 years before his retirement, Wisden Cricketers’ Almanack ranked him the second greatest Test batsman of all time behind Don Bradman. At the age of 29, cricket’s most respected publication rated him No.2 in the queue behind Sir Donald.

But debating who was better – either via stats or YouTube – is as pointless as it is disrespectful to both men.

Tendulkar batted as if he hadn’t read the coaching manual, rather he wrote it, bit by bit. He then spent 24 years demonstrating his words in rhythmic motion in front of a country of adoring fans and a world of envious and appreciative onlookers.

He was never an accomplished skipper. In fact, he shirked the added responsibility for the vast majority of his career. Of the 25 Tests he captained – across two stints – he won just four matches.

When Rahul Dravid resigned from the captaincy in 2007 on a tour of the UK, BCCI President Sharad Pawar offered the job to Tendulkar who politely declined, instead recommending Mahendra Singh Dhoni to the role.

He never liked extra responsibility. His job was to bat – that carried enough obligations by itself.

But like any sportsman, lean periods are par for the course. From 2004 until 2008, Tendulkar was a shadow of his former self: still proficient enough to demand the utmost attention from opposition bowlers, but far from the freewheeling, balletic batsman that took the 1990s by storm.

Greg Chappell, his national coach, was publicly critical of his attitude. Tendulkar bit back uncharacteristically: “Name another coach who has criticised my team-first ethos?” he snapped following Chappell’s comments.

Chappell wanted to drop his star player down the order ahead of the 2007 World Cup. Tendulkar, for all his niceties, wasn’t ready to be told he had to play second fiddle.

By his own admission, the pressure of responsibility and a chronic left elbow wore him down. He became a batsman afraid of failure and intent on minimising risk. Out went the hook shot and cover drive – two signature strokes the boy from Bombay had made his own.

This was not to say he wasn’t successful in his relative off period. Instead, his game evolved and matured. In the New Year’s Test against Australia in 2004, Tendulkar crafted a majestic 241 almost exclusively without a drive through the covers.

In narrowing his supreme range of shots, he forced the Australians to bowl to him, and they paid dearly. In that match, he made 301 runs in 721 minutes without being dismissed – 12 hours and one minute of flawless batsmanship.

Yet Tendulkar the batsman doesn’t tell the complete story.

He’s claimed exactly 200 international wickets as a leg-break, off-break and medium pace bowler and held onto 256 international catches. Even the most devoted statistician would be hard-pressed to find a cricketer in the history of the game that had taken 200 wickets for his country but isn’t considered within a length of the all-rounder category.

His achievements are even more remarkable when considering the weight of expectation he has carried around for a quarter of a century. Tendulkar has flourished from the very moment he stepped on the pitch for India as a 16-year-old.

Three months short of his 41st birthday, Tendulkar will play his final international match. First he retired from international T20 cricket after just one game, and then came ODI cricket, and now it’s time to hang up the whites.

His curtain call has been staggered on his terms, in his time.

Tom Morris is a third year Bachelor of Journalism (Sport) student at La Trobe University. You can follow him on Twitter: @tommorris32.