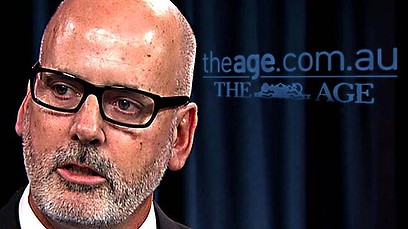 In a corner office, as trains rattle to nearby Southern Cross station, Andrew Holden, the new editor-in-chief at The Age calmly sits.

Given all the challenges that have been thrown at him, the capacity to remain calm is helpful. Fortunately, Holden has that capacity in spades.

It was demonstrated perfectly when a major earthquake struck Christchurch killing 185 people on 22 February 2011. With the ground shaking and buildings collapsing, Holden somehow kept his cool and lead The Press in publishing a paper.

It was a paper of incredible significance that helped a city in ruins. The small sense of normality when the papers landed on people’s door steps the next day would go a long way in helping them resume everyday life.

‘We got a fantastic reaction from our readers,’ says Holden.

‘They couldn’t believe they had a paper. Why would they? Many people didn’t have power or water, so the idea of having a paper was very special.’

It was important for other reasons too. With limited computer, phone and radio availability, Holden says, ‘the paper became the first real understanding of what happened as well as a vital source of where to get food and water.’

Holden also says focus was the key to that day, ‘to focus on what you can do, what you need to do … your priority’.

Such leadership qualities were very appealing to Fairfax, and what ultimately saw Holden working at The Age and returning to the city that ‘has always been home’.

Holden says he was happy in New Zealand, which he describes as having a similar culture to Melbourne, but for him Melbourne is ‘family and a lot of old friends’.

For Holden it also means football – the right kind. He says he never really got New Zealand’s sport. Now back home, he honestly admits that, ‘rugby is a fundamentally stupid game. I mean you run out on the field and your purpose is to run into someone’.

A natural Victorian, Holden is a passionate footy follower and a loyal St Kilda fan. He adopted the team with one of his brothers in 1965, a year before the club’s one and only premiership. Taking a sip from his coffee he acknowledges this decision as an, ‘error you make when you’re five years old’. His elder sibling chose Hawthorn.

For now football acts as a relief from the media havoc. Holden says he knew he would be facing some big tests but ‘there has been a few extreme ones’.

The number of job losses at The Age has been well publicised, but Holden was not aware of the pending cuts when deciding if he would take on the position. He reveals: ‘I’d been chatting … about taking on the role, and then a week before I take over, (Greg) Hywood announces 1900 job losses, the closure of the printing plants, the move to the compact edition.’

The whole paper has undergone great change, particularly with the restructure of the workforce, including management.

‘All leadership positions have effectively been spilled or refilled,’ he says.

The restructuring and redundancies have not been pleasant but have been necessary ashe explains, ‘the advertising revenue is not there to support a business of that size’.

The redundancies have saved money but they too have come at a cost. Nineteen hundred have been lost across three papers: The Age, Sydney Morning Herald, and Canberra Times. Holden’s paper is missing many senior journalists.

For all the grimness, Holden says the departures have been voluntary. You would think that would make the job easier, but having Fairfax, ‘reserve the right to say no to an application,’ added another level of complexity.

Holden had to make a lot of decisions, and for the most part was telling people that rather than needing them to leave, they couldn’t.

‘I told them no, I wouldn’t accept it, so don’t bother. From a company perspective (it would be) very sad to lose them.’

The shedding of jobs has been only one of what Holden describes as, ‘three monster changes in a very short period.’ The paper is also changing format and moving to a greater digital focus.

Holden says reason for this is because that’s where the audience is going.

‘That really is the fundamental challenge of the next five years… it’s how do I get people to pay for journalism in whatever form they want.’

That doesn’t mean the quality is going to change, if anything he says, ‘the quality has just got to get better, I think if anything, we’re just going to have to get smarter’.

Holden thinks both he and The Age are up to it. After all that has happened in the first five months in the job he says, ‘now that we’re through those (previous difficulties), how hard can it get?’

This comment could be tempting fate — Holden’s history suggests a new challenge could be just around the corner.

Perspective is Holden’s greatest asset. Ever calmly, his view is you just, ‘look at an earthquake and say that doesn’t matter’.

Robert Henningham is a first-year Bachelor of Journalism student at La Trobe University. You can follow him on twitter @rjhenningham.