From humble beginnings of calling Marcellin College’s football games from the sideline, Andy Maher’s sports media career has spanned across more than 25 years in radio, television and print.

A keen surfer, avid golfer and with a deep passion for AFL, cricket and now soccer, Maher is definitely the ideal man to head up a breakfast radio show about sport. 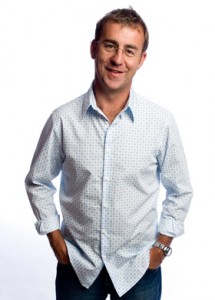 Unless it’s about motor sport. When it comes to sporting interest, Maher admits that he does have one pitfall in his repertoire of sporting knowledge.

‘I try to get interested in motor sport but my brain just can’t get there,’ he says.

Maher’s busy schedule includes co-hosting Morning Glory, the breakfast show on SEN 1116, Carlton Football Club’s The Blueprint, Channel 10’s Before The Game and Fox Sports’ Fox Sports FC. Of course the last two AFL-based shows are seasonal, but Maher explains that he cannot escape the grasp of football in his busy radio life.

‘There isn’t really an off-season anymore. The AFL will always be the main course on any breakfast (radio) sports show based in Melbourne,’ he says.

‘The others (TV shows) go into hibernation over summer so there’s no involvement with either until the season starts again.’

Having started his media career back in 1986 writing for Inside Football, Maher has traversed one of the more successful routes to sports media recognition. After six months of writing for free, he became a staff writer and was eventually picked up by The Age to be the football editor.

His foray into television began in 2001 where he was thrust into the match-day world of broadcasting as a boundary rider for Channel Seven. These days his current employer, Channel Ten, no longer has the broadcast rights to the AFL, but Maher explains there is an upside to not having that commitment.

‘It’s actually been great. With Before The Game moving to Thursday nights it means that I can pick and choose between the AFL and the ammos (amateur football) on Saturday,’ he says.

‘I played a bit of footy with the Old Collegians at Marcellin and have really enjoyed getting back there and watching some grassroots footy. I’m still calling games for SEN, so I get to see enough AFL first-hand.’

With his work so entrenched in football, Maher admits that it’s hard to see football as anything other than work, but he still gets pleasure in the Marcellin matches he regularly attends. The connection with local footy and the school he once attended means that he can still show his love and support for the sport, without it engrossing him in terms of work.

‘The older I get, the more I appreciate the grounding I got. I’m more and more enjoying going back and watching those teams play,’ he says.

‘I was never good enough to get anywhere near AFL standard, so it’s a bridge too far imagining what you’d do if out there (playing AFL). Not so with the ammos or the schoolboys, having been there and done that, you can relate.’

Despite the lack of match day involvement for footy on a Saturday afternoon, Maher still calls games for SEN. For the summer, Maher has also managed to snare a match day gig with Fox Sports, boundary riding A-League games.

‘The games might be different but the role is pretty similar,’ he says.

Amazingly, Maher says that he is constantly learning on the job with Fox Sports and that his hiring was quite simply for those that aren’t soccer experts.

‘I was the square peg in the round hole – they (other match-day crew) are all soccer aficionados, while I was the AFL bloke brought in to offer a less pure, more casual observers appreciation,’ he explains.

Although not well versed in soccer, Maher is still considered one of the best in sports radio. Having hosted shows on SEN since 2005, he has worked along the likes of Andrew Gaze, Tim Watson and Billy Brownless.

Maher is rather modest when I ask him what makes a successful sports radio show and says it is the back-room guys that contribute greatly to a shows success.

‘It’s important to know that anything which is seen to be successful takes way more from just those behind the microphone or in front of the camera. It’s often the back-room team which makes or breaks the shows that people rate,’ he professes.

‘You have to be awake and sometimes that’s not as easy as it might sound. You can’t have off days, people want to be entertained and informed. You read loads the day before the show and then hit the papers and the net for about an hour before going on air every day,’ he says.

But it’s a commitment to sport journalism that Maher says is pivotal to success.

‘I would encourage anyone thinking about sports journalism as a career to get out in the field and do whatever you can now. Volunteer your services to local newspapers, stand on rooftops calling games for local footy clubs, get into radio stations and offer your services on the shifts no one else wants to do. The more experience you can get the better, and the keener you are the more likely it is that someone will notice,’ he advises.

‘I need to be tucked in by nine. That’s my cut-off time.’

Matt Walsh is a first year Bachelor of Journalism (Sport) student at La Trobe University. You can follow him on Twitter: @MattWalshMedia