Cars and trams have been brought to a standstill during peak hour on the corner of Flinders and Swanston Street. 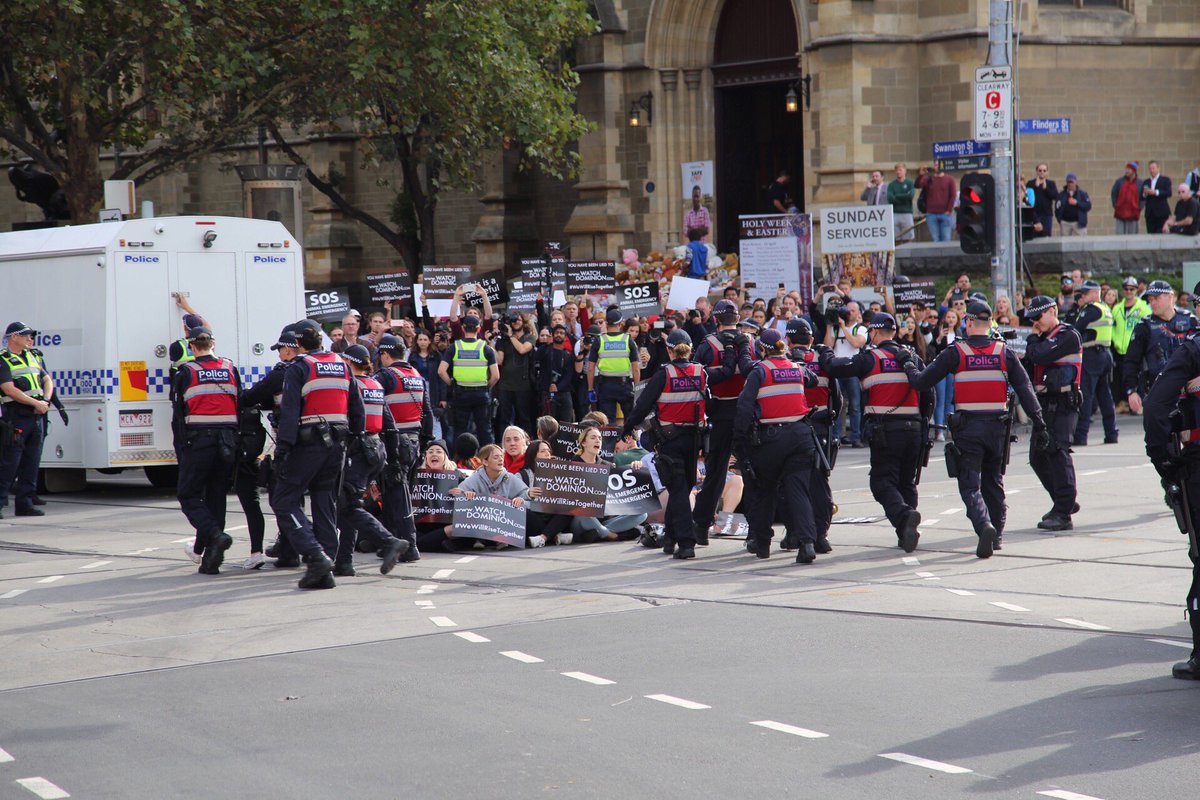 Vegan activists have shut down Melbourne’s busiest intersection in a nationwide protest for animal rights.

The protest marks the one-year anniversary of the vegan documentary, Dominion, which investigates the practices of livestock farms.

The group of protesters gathered in the intersection at 5:30am outside Flinders Street Station, holding signs and chanting.

Vans covered in the branding of the vegan documentary were placed on the tram tracks, disrupting 11 tram lines.

Police were forced to remove the protesters from the intersection and multiple arrests have been made.

The last of the vegan protesters carried off Flinders Street @SBSNews pic.twitter.com/REX7H0mwoZ

The intersection has since been cleared after five hours of protesting.

Victoria Police said they were monitoring the protests across Melbourne to ensure they remain peaceful.

“The safety of the community is our number one priority,” they told 3AW.

“Victoria Police respects people’s right to protest peacefully but will not tolerate any anti-social behavior or violence.”

After being moved on from the intersection, the activists have since blocked the entrance to Melbourne Aquarium.

Vegan Rising campaign director Kristin Leigh told ABC News that the protest was planned to be one of nine nationwide, including five in Victoria.

In Pakenham, protesters have chained themselves to a truck and there have been other reports coming from MC Herd abattoir in Geelong where a group of activists blocked the company’s entrance.

Farmers in New South Wales and Queensland were also placed on high alert after multiple protests occurred on private property.

Campaigners rallied at Carey Bros Abattoir about 3:30am before police were called to the abattoir to negotiate with activists.

No arrests were made after the protesters moved.

Police were called to Carey Bros Abattoir at Yangan around 3.30am, with reports around 20 protestors had unlawfully entered the facility. Now there’s around 100 outside. pic from @GreenShirtsQLD @WINNews_TWBA pic.twitter.com/4ADazBIupj

At 2:30am, nine people attended an abattoir in Goulburn in New South Wales, where they chained themselves to a conveyor.

After refusing to move, the Goulburn Police Rescue was called, and the protesters were arrested at the scene.

In Queensland, 20 animal rights campaigners chained themselves to equipment at Warwick abattoir.

Two hundred other protesters were found outside the facility chanting for the rights and fair treatment of animals.

Speaking to 2GB radio this morning, Prime Minister, Scott Morrison said that their acts were “shameful and un-Australian”.

Tony Mahar from the National Farmers’ Federation has also slammed the behaviour of the protesters.

“What we’re dealing is radicalised extremists, and they are that,” he said.

Over the weekend, the Gippy Goat Café was closed due to harassment towards the workers and the businesses.

The cafe took to Facebook to say that their closure was “regrettably the best option” for the company.

The shutdown comes after animal rights activists stole three goats and a lamb from the café late last year, and were released without charge.