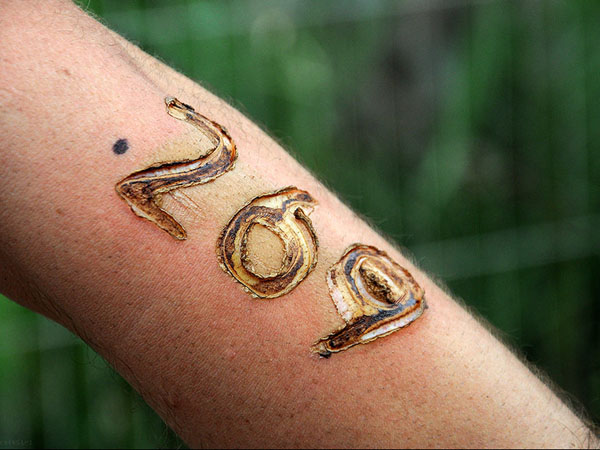 A hot iron is all it took for slaughter house calf number 269 to become scarred into the skin of man, sparking an international war.

But it’s not your conventional modern warfare. Rather than guns – men are being branded in the street. Instead of tanks – women are being publicly milked. In the place of bombs – animal heads are put on display in a blood stained fountain.

The founder of these war tactics and the 269life movement is Israeli man Sasha Boojor.

“I do believe this is a war. The war is being raged against our neighbours on this planet, by our species, against all others.” says Boojor.

The 269life movement began on the second of October 2012, when three men were branded with the number 269 at Rabin Square in central Tel-Aviv, Israel.

Since then, they have gained over thirty thousand Facebook followers.

According to the 269life website, the branding was an “act of solidarity and empathy towards abused animals exploited by the human race”.

While there are already a number of animal rights groups around the world, 269life takes a more radical approach.

Each day, confronting videos and photos are posted to their website and social media pages.

The videos – listed in the war tactics above – depict people being treated like animals. This is to give the public a sense of what animals go through before being slaughtered and ending up on your dinner plate.

These types of media have prompted people to commit themselves to the cause for life, with many following the leaders, tattooing or branding themselves with the number 269.

But, this is just one part of the campaign.

Perhaps the most outstanding feature of 269life is the strong views of Boojor and his followers.

Their absolute disgust in humanity and repulsion towards outsiders is what distinguishes them from many other animal activist groups.

Not only do they display hatred towards vegetarians and meat eaters, but, if a vegan also wishes to act as a humanitarian, they are seen as another ‘Nazi’ in the animal holocaust. The main reason for this is that they believe humans are the problem to begin with.

This attitude can be seen in posts from 269life followers on the groups Facebook page:

“Unfortunately for the animals, people are inherently selfish. “F*****g cruel nazis,” said one follower and another agreed, “That’s right humans are a virus.”

Others put forward extremist, at times genocidal, views on the Facebook page targetted towards the human species.

“If there is a God or Satan then I ask of any of them to give humans back what they do to animals. If they torture animals, [they] are to be tortured in the same way… I feel ashamed of humans… Who tortures like this… deserves to be killed.”

“I do think we need ‘thinning out’. Who’s up to go killing some humans!?”, said another radical animal activist.

While the collective thinking of the group can be quite selective and at times extreme, it represents an unconventional path to a positive destination.

“My ultimate aim is of course to bring us closer to the day in which animals would be free of human interference and enslavement,” says Boojor.

The overriding idea of this group is that animals are of the same worth as humans. To express this, one follower went as far as posting a video of people eating human foetuses. He questioned what the difference is between this act and eating a new born calf.

In order to achieve animal liberation, Boojor says a harsh approach is necessary to convince people to wholly join the movement.

“One of the ways to get there is by provoking people to the point they must concisely decide,” says Boojor.

269 followers have also begun to graffiti public property, some have broken animals out of factory farms and one man in America tried to burn down a slaughter house.

When asked what made him so passionate about the issue Boojor said:

“After reading an animal rights flyer in school, I decided to visit the organisation that produced it. There, I was shown all the gruesome footage that the animal using industry are now trying to outlaw by passing laws which will, outrageously, throw those who film said abuse into jail. After seeing the horror in the animals’ eyes, I was compelled to re-evaluate my life completely.”

While many things said by Boojor and his followers are undoubtedly genuine and expressed with good intentions, the aggressiveness and selectiveness of the group is their downfall.

The biggest issue, in particular, is the exclusion of people only willing to make small changes.

One man came under fire for changing his place of purchasing meat to local farmers or farmers markets and a vegan was reportedly attacked online and was nearly kicked out of the movement for being a humanitarian.

While most people in the group will accept nothing less than 100 per cent commitment, a sense of hypocrisy could be seen when Boojor was asked if he was 100 per cent vegan:

“Of course not, it’s impossible to be completely cruelty free… It’s not about being perfect, it’s about doing what we can.”

Tahlia McPherson is a third year Bachelor of Journalism student at the La Trobe University and is one of upstart’s staff writers. You can follow her on Twitter@TahliaMcPherson