AFL retirement is a journey and Koutoufides illustrates that you can be just as successful outside of the game. 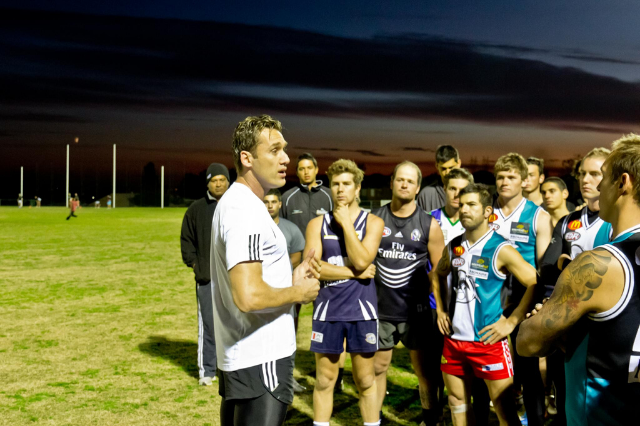 The name Anthony Koutoufides is synonymous with football royalty. It’s been over 10 years since the Carlton legend said goodbye to the game, but the number 43 remains on the back of fans’ guernseys.

Koutoufides’ capabilities as a football player is what allowed him to stand out from his teammates and competitors. He could play in any position and engage in just about any contest on field. His talent is reflected in his CV: a premiership, dual best-and-fairest, captaincy, Hall of Fame induction and All-Australian selection.

In 2007 after 278 games played, Koutoufides retired from football.

“Both my body and mind were ready for retirement. I couldn’t push anymore,” Koutoufides told upstart.

Shortly after retiring, Koutoufides embarked on a succession of media appearances. During his off season in 2006 he starred on Dancing With The Stars, he took out the top prize on the series. He later featured on the Channel 7 Gladiator series and became the face of the Souvlaki Hut. Koutifides enjoyed these media experiences, but still, he always thought he’d return to the game.

“At the back of my head I always wanted to get back into footy, but there was nothing there for me,” he said.

A notable difference felt by Koutoufides and other retirees of his time was the lack of transitional schemes or support offered. Today the AFL Players Association plays an important role in assisting players post retirement. This includes education and training grants that can be used for university studies, TAFE courses, short courses and access to the AFL Players’ and AFL Superannuation Fund and the Player Retirement Scheme.

Still, Koutoufides is adamant that he wouldn’t change anything about his retirement as each hurdle, like figuring out the next career step, and the mental health issues he has discussed in the past, have played a part in where he is today.

His own journey has finally led him to his business model, KoutaFit. It’s an interactive online based workout program where he is able to support those on their journey towards healthy lifestyle. It includes workout programs, food guides and a support group that allows the participants to communicate with each other on their journey. Being able to assist people on their path is one he takes great pride in.

“In some ways it’s more rewarding than people patting you on the back after a good game. You’re helping people change their lives for the better,” he said.

There is no doubt that Koutoufides cherishes the defining moments of his career, and he feels lucky that he is still recognised. But Koutoufides’ outlook is simple. He wants to continue helping people achieve their best.

“I love it with a passion. All I can do is lead the way and promote a healthy and active lifestyle,” he said.

As Koutifides gets older he says has realised he needs to listen to his body, this includes accepting the wear and tear on his body that occurred while he played footy. For some, these kinds of changes called an early end to their career, and for others its a part of the ageing process.

“In your 20s you feel like you’re invincible. You’re obligated to the game so you play through injuries and you don’t really think too far beyond that,” he said.

And with a strict training schedule Koutoufides continues to feel aches and pains. However, he also knows that the training regime he engages with today won’t last forever.

“My body is hurting right now, and I love training, it’s my life. To think that I can’t train eventually is hard for me to accept as well,” he said.

Koutoufides offers some advice to those who are coming to the end of their football careers.

“Make sure that you’re ready. You can’t be ready in that final year, you need to have a plan. You need to be prepared and sometimes that day comes quicker than you think,” he said.

Photo: ‘Anthony Koutoufides At Hillside Seniors Training-10’ by Russell Charters is available HERE and used under a Creative Commons Attribution. The image has not been modified.