COVID-19 has seen anti-mask protests worldwide, but this isn’t the first time they have been protested. 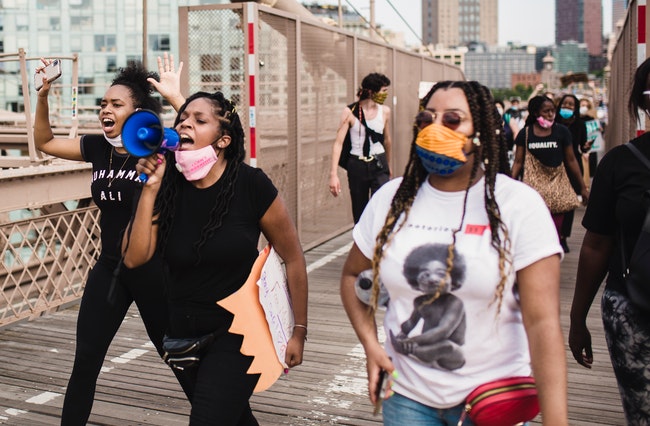 Masks were once worn by our doctors, nurses, scientists and even nail technicians for hygiene purposes in up-close situations, but now a face mask is mandated by law as an everyday essential for Melbournians as soon as they step outside their front door.

And history shows that they can be a controversial accessory.

During March of 1918, 100 soldiers had caught what was thought to be the flu in Kansas. Shortly influenza was spreading like wildfire across seven US cities, and by the end of October there were more than 60,000 cases state-wide with 7,000 of those reported in San Francisco.

On 22 October 1918, Mayor James Rolph signed “The Mask Ordinance”, making San Francisco the first American city to implement mandatory face coverings. They were soon known as the “masked city”. The following year on 25 January, the Anti-Mask League was established in San Francisco to protest mandatory face masks, despite a death toll of at least 244,681.

More than a century on, history repeats itself with anti-mask movements emerging across the world in response to face covering mandates amid COVID-19.

Bryan Harris lives in Florida and is a moderator of the Facebook page “Anti-mask League 2020” which was created in June this year and named after the original organisation formed in 1919. The page currently has a following of 2.7 thousand members who regularly post about the anti-mask movement. Harris joined in July.

“It was a group created by a friend from another group more devoted to the reopening of our economy and lives,” Harris told upstart.

The Facebook page shows the political divide caused by mask mandates. Harris, who is anti-mask mandates, says that it “strips” people of their individual freedom of choice.

“I am for personal choice when it comes to the decision to either breathe freely or through cloth mask. Mandates only cause division amongst citizens and create a mask [versus] no mask battle,” he said.

All the early guidance directed towards Harris by the World Health Organisation (WHO) website stated that masks were not effective and could have “unintended bad consequences” if worn by the general public. Harris believes that the masks mandates were implemented to prolong “fear”.

“Just when the public was getting over the initial hysteria, all of the sudden masks were brought into the picture to again create a look of fear. Nothing about the science changed. Only their desire to keep the fear and panic going,” he said.

Another factor causing confusion and frustration is that since the century-old Influenza pandemic, there has been a lack of research surrounding the effectiveness of face masks on the general public.

In a report published by The Los Angeles Times in November 1918 when city officials were meeting to determine the requirement for residents to wear face coverings, public feedback was invited and published. A Doctor, E.W. Fleming, spoke to the paper about incorrect wearing, similar to complaints seen today.

“I have seen some persons wearing their masks for a while hanging about their necks, and then apply them to their faces, forgetting that they might have picked up germs while dangling about their clothes,” he said.

Other criticism from citizens described masks as “mere dirt and dust traps [that] do more harm than good”.

Susan Wieczkiewicz, a research economist at the University of Melbourne who recently wrote a research paper Is it time to mask the Problem? says the “mixed feelings” Australians were experiencing regarding the mandatory mask laws is understandable.

Wieczkiewicz says that there are two elements associated with the divide among citizens when it comes to the acceptance of mandatory face coverings: the presence of believers and non-believers, and concern about whether masks will improve or worsen the spread based on “people [getting] lazy about other social distancing measures”.

“Firstly, many people don’t believe that COVID-19 is a problem. For people in this category, wearing a mask is an uncomfortable solution to a problem that doesn’t exist. But people who accept that COVID-19 is real and dangerous can still have concerns and strong objections. That’s because, until recently, there hasn’t been a strong consensus on whether masks [work] to protect healthy people,” Wieczkiewicz told upstart.

While Wieczkiewicz believes that in general people accept the need for doctors, nurses and other medical professionals to protect themselves with masks, she says evidence of their effectiveness for the public has not surfaced until recently.

“A WHO-funded study, published in June 2020 changed all that when it collated the results of a large number of studies that looked at the effectiveness of mask-wearing. It concluded that, on balance, there was enough evidence to say that masks worked to protect healthy people from catching COVID-19,” she said.

Datastudio – a worldwide google survey – found that when people are asked why they are not wearing a mask, 77.1 percent do not speak to its lack of effectiveness, but to issues of personal freedom and constitutional rights.

Bryan Harris is a firm believer that “this is not about a virus” but is rather about “control”, a belief that remains the same even a century on from the influenza pandemic. He also believes there are other ways to deal with the virus.

“Scholars from Stanford and Yale both have said we will need to get to natural herd immunity, and mandates and closures will only extend the virus, not defeat it,” he said.

The best way to battle the COVID-19 virus remains up for debate as the worldwide death toll climbs to over 1 million, with a high chance of masks forming part of our outfits for the foreseeable future.

Article: Megan Lansbury is a second-year Bachelor of Media and Communications student (Journalism) at La Trobe University. You can follow her on Twitter @MeganLouise0211

Photo: Women at a protest by Life Matters available HERE and used under a Creative Commons Attribution. The image has been modified.