Despite increased focus on diversity in school, studies show LGBTQIA-specific resources are lacking in some school and states. 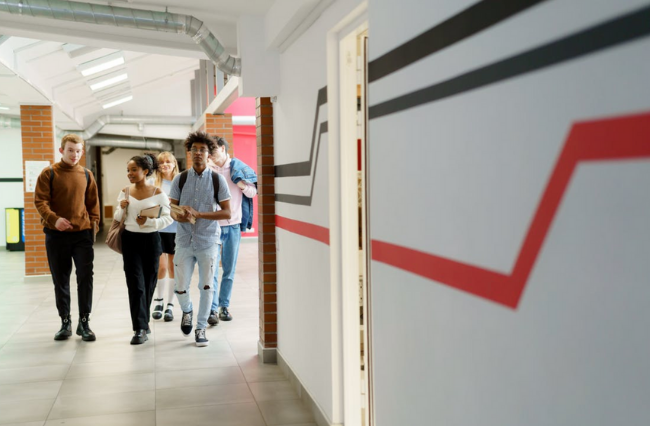 “When you’re in a place where you’re in charge, and you’re the authority, you shouldn’t allow hate like that to just happen in the classroom so nonchalantly,” Teisha Horvath tells upstart.

During her time as an LGBTQIA+ high school student, 20-year-old Horvath recalls homophobic slurs constantly being thrown around the classroom while teachers just watched.

Combine these kinds of experiences with a lack of inclusive education, it might come as no surprise LGBTQIA+ youth are suffering.

A recent study of LGBTQIA+ Australian youth found that 60 percent of secondary school participants felt unsafe or uncomfortable going to school due to their sexuality or gender identity.

Doctor Christopher Fisher, associate professor at the Australian Research Centre for Sex, Health and Society (ARCSHS) says these statistics show that the fundamental human right to a safe education isn’t being met in some schools.

“If an LGBTQIA+ student is feeling unsafe in school or missing school because of their sexuality or gender identity, then their human rights are being violated,” he tells upstart.

The Writing Themselves In study found that 28 percent of students experienced verbal harassment, and almost 7 percent experienced physical harassment or assault due to their sexuality and gender identity. Then there are the students who haven’t come forward. It also found that because of these experiences, many LGBTQIA+ students are resorting to skipping school, meaning their education is being compromised.

School is supposed to be a place of learning, so the real question is: can inclusivity be taught, making schools a safer place for these students?

The data shows that so far LGBTQIA+ youth are yet to see any indication of this happening. Less than 14 percent of the Writing Themselves In high school participants say their school mentions one or more aspect of the LGBTQIA+ community in a supportive way.

Dr Fisher says that while the broader concepts of diversity are covered, the lack of specific context leaves this open to interpretation by states, schools and teachers.Meanwhile, studies conducted by the ARCSHS demonstrate that school-age children do want more information on LGBTQIA+ safe sex education, relationships, and respect to be taught in schools.

When approached for comment, the Australian Curriculum And Reporting Authority (ACARA) maintained that all schools have a responsibility to maintain inclusivity, and that it’s particularly important to include students who are same sex attracted, gender diverse, or intersex. In their written response they also outlined that the curriculum covers discrimination based on race, gender, and sexuality; changing identities, including sexual and gender identities, as well as celebrating and respecting differences.

However, despite ACARA being responsible for the development of the curriculum, it is individual states and territories that control how this curriculum is taught. Dr Fisher says this means that schools can choose not to provide an inclusive education.

“This depends on the state, territory and school type. In general, yes, some schools can and do opt out of providing inclusive LGBTQIA+ content,” he says

In former student Teisha Horvath’s experience, the slurs used by students was practically the only mention of any LGBTQIA+ content, aside from talk of safe sex, which was restricted to male same sex relationships. During her time in high school, same sex marriage was a hot topic, too, and many students were expressing their disgust for the LGBTQIA+ community inside and outside of the classroom. When things got too much during one physical education class, Horvath says she asked a teacher to intervene, to which they responded that it was just a ‘debate’.

“At that point, it wasn’t a debate. That was an attack on human rights, essentially. And [the teacher] was just letting it happen,” she says.

Ullman’s study found that an inclusive education and school environment does make a considerable difference in the lives of LGBTQIA+ youth.

“LGBTQ+ students who reported more inclusion of diversity issues in their curriculum had significantly better school-based well-being than LGBTQ+ students in schools with little to no inclusion,” she wrote for The Conversation.

Ullman also asked students about their academic self-concept, which is how they rate themselves in terms of how well they do in school, and how important it is for them to do well. When students reported that their teachers acted positively about same sex attraction and intervened when negative comments – such as LGBTQIA+ slurs – were made, students reported higher levels of academic self-concept.

The message is clear: students need a consistently inclusive education that is supported by their teachers. Ullman also highlights the fact that teachers need more training regarding LGBTQ+ harassment and violence.

“Such efforts, alongside positive inclusion, can enable LGBTQ+ students to reach their full potential,” she says.

Organisations such as Minus 18, who provide support for LGBTQIA+ youth in Australia, also provide inclusion training and classroom resources for teachers wanting to create a more inclusive curriculum for their students.

For former Teisha Horvath, she believes that schools are “getting there”, but there is work to be done.

“They’re definitely starting to talk about it, but it’s still not normalised to the point where there’s still definitely still stigma. And it’s definitely that stigma that made it hard,” she says.

Meanwhile, ACARA says that they’re currently reviewing the Australian curriculum. What the changes will be and what they’ll mean for LGBTQIA+ students with similar experiences to Horvath remains to be seen.

Looking for information or support?

For LGBTQIA+ specific support, there are several options across Australia to help. Here’s just a few places dedicated to aiding and supporting LGBTQIA+ individuals: Qlife, Black rainbow, and Minus 18.

Article: Clareese Packer is a journalism major in the Bachelor of Media and Communication at La Trobe University. You can find her @clareesepacker on Twitter.

Photo: Students walking in the hallway by cottonbro available HERE and used under a Creative Commons licence. The photo has not been modified.