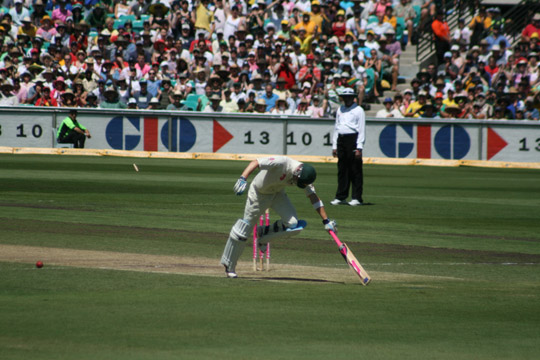 After what was a rollercoaster 2011/12 season for the Australian cricket team, they now return on home soil to kick off the 2012/13 summer with a bang against South Africa at the Gabba on Friday.

The Proteas have fond memories of previous tours down under after dominating the Aussies when they last came in 2008. The host nation was embarrassed in both the tests and one-dayers and now wants revenge four years later.

Michael Clarke will be hoping to get the Aussies over the line this summer. (Image: Wikimedia Commons)

Skipper Michael Clarke will lead a fairly strong Australia side over the summer, which will feature debutant Rob Quiney who replaces the injured Shane Watson, as well as veterans Ricky Ponting and Michael Hussey who are playing for their careers.

Quiney, 30, has starred for Victoria over several seasons and most recently hit the dangerous South African bowlers around the park playing for the Australia A side.

The injured Watson is only set to miss the first test against South Africa but Clarke has claimed if Quiney and the Aussie squad perform well in the opening match he is not guaranteed a spot in the second at Adelaide Oval.

Nonetheless, Quiney (or Watson) and openers David Warner and Ed Cowan have a huge task on their hands, facing up to speedsters Vernon Philander, Morne Morkel and the number one bowler in the world Dale Steyn.

It will be vital for the top order to fire if Australia is to succeed against South Africa as the ageing Ponting and Hussey, both 37, leave question marks in the fifth and sixth positions.

Wicketkeeper Matthew Wade steps in to take the reigns from the outgoing Brad Haddin, who has been dumped by Clarke and chairman of selectors John Inverarity after years of poor form.

The 24-year-old Wade made his test debut against the West Indies earlier this year and made 106 in his third match. He has also produced superb form with the gloves as well, something Haddin has failed to do for a while now.

The Aussie bowlers will also need to find their solid form to combat the talent of the South African batting line-up. The visitors boast four of the top ten batsmen in the world, including Hashim Amla, Jacques Kallis, AB de Villiers and skipper Graeme Smith.

But the big plus for the Australian side is its array of quality fast bowlers, with Mitchell Starc, James Pattinson, Peter Siddle and Ben Hilfenhaus all making the squad for the first test.

Depending on Clarke’s tactics and whether the captain wants to play three quicks and a spinner, one of those guys might have to carry the drinks.

Leg-spinner Nathan Lyon is clearly the country’s best slow bowler but is still yet to prove he is the next Shane Warne … the question still remains, will there ever be another Shane Warne?

The Aussies will be out to topple the top ranked team in the world, who will come here to prove they really are the number one team.

If Australia can beat South Africa they will go a long way to regaining that coveted number one position on the global rankings, which they then may be able to secure in its series against Sri Lanka after.

But that too will prove a challenge for the home nation, with the Sri Lankan side featuring the world’s best batsman Kumar Sangakkara and the world number four bowler Rangana Herath.

Two big series, two big challenges. Can the Aussie’s return to its winning-ways or will it be more misery on home soil?

Ashley Shenker is a third-year Bachelor of Journalism student at La Trobe University and part of upstart’s editorial team. Follow him on Twitter: @shenks7