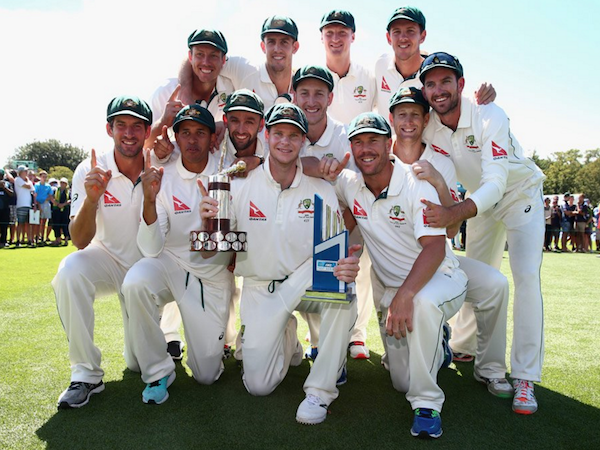 The Baggy Green is once again at the summit of international cricket.

Australia tops the test leaderboard with a rating of 112, whilst India and South Africa round out the top three with respective rankings of 110 and 109.

Australia, No. 1 Test side, pose with series trophy, will get Test Championship Mace & prize money of USD 500,000. pic.twitter.com/XhQiNw72Cw

Whilst the shorter forms of the game have captured the imagination of millions around the world, the general consensus among pundits and fans is that test cricket is still the competitive measuring stick for the sport.

However, despite being undefeated in the longer form of the game for over six months, as well as winning the previous limited overs World Cup, the question still remains – are Australia truly the best team in the world?

If you were curious, Australia’s ranking in the shorter forms isn’t too shoddy either. Along with being ranked first in the world in tests, Australia is also the top ranked one-day side. Twenty20 is the only form in which the Aussies are not leading the pack, sitting adrift in third.

Australia’s journey to attaining the famous championship mace has been synonymous with the rise of its captain, Steven Smith. Back when Australia was last ranked number one, from May to June 2014, Smith was considered a precocious talent.

Now, he is among the best batsmen in the game and is consistently putting bowling attacks to the sword.

In the 21 matches he has been involved in since June 2014, Smith has plundered 2491 runs at an astronomical average of 83.03. He has also managed to rack up hundreds on ten of those occasions.

Having taken over the captaincy from the retiring Michael Clarke, Smith’s side is yet to see defeat. Since last year’s Ashes defeat, Australia has emerged victorious in six of its eight test matches with the only blemishes being draws against New Zealand and the West Indies.

Critics may suggest that Smith’s record is not as impressive as it seems due to the friendly fixture list. However, ABC Grandstand’s Adam Collins explains that Australia’s current run of form is very valid.

“You can only beat who you are drawn to play. Taking the side to number one, however it is calculated, at the end of the summer [Smith] took over, and within a year of the Ashes debacle, shouldn’t be dismissed,” Collins tells upstart.

“Let’s not forget that New Zealand were strongly fancied before both series, and on both occasions Australia dominated on the first day.”

The ICC’s current ranking system is a complex one which can prove troubling for the average fan to keep track of and understand.

Collins suggests moving towards a Test competition similar to the limited over World Cup as a possible solution.

“The ICC rankings table is flawed, but the only way to really deal with that is a league table that culminates in a World Test Championship every four years,” Collins says.

Australia may have had an easy run according to some, but tougher opponents are on the horizon: Smith’s side will travel to Sri Lanka later this year.

The experience of playing in sub-continental conditions will be essential for preparations, as another tour in early 2017 in India awaits.

“The Sri Lanka series later this year is vital in the ramp up to [the India] tour,” Collins says.

Sandwiched between the clash with the sub-continental sides is a home series against South Africa, who Australia defeated in 2014 last time they took the number one spot.

Collins agreed that winning in India will be a major challenge, echoing Steve Waugh’s sentiment of it being the ‘Final Frontier’ for Australian cricket.

“Australia haven’t so much as won a Test in India since 2004, so it remains a massive task to win a series there over four Tests,” Collins concedes. “All energy, I have no doubt, will be squarely focused towards it.”

Chris De Silva is a third-year Bachelor of Journalism student at La Trobe University. You can follow his musings on Twitter @cdesilva23