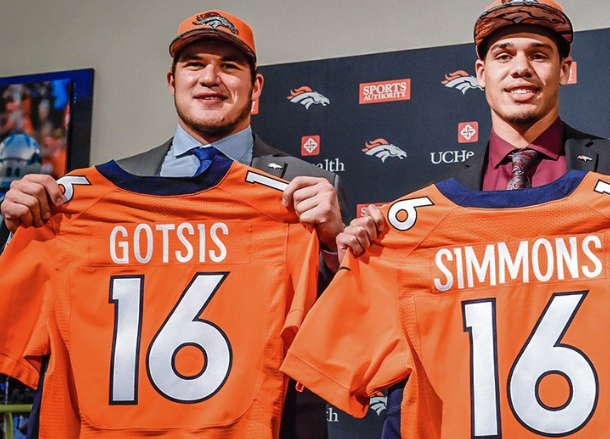 Adam Gotsis recently became the first Australian in history to be selected in the second round in the NFL draft.

He is a physically imposing young recruit; at 195cm and 130kg he is ideally suited to playing American football (also known as gridiron).

Gotsis initially played Australian rules football as a junior before changing to gridiron as a teenager.

Through a Google search Gotsis joined the local gridiron club the Monash Warriors, playing in a recreational league composed of diehard fans of American Football.

By 19 years of age Gotsis had developed into a formidable local talent and represented the Australian National American football team at the IFAF World Championship in December 2011.

Gotsis was offered a place at Georgia Tech after their football recruiting department saw a video of him playing in Melbourne.

Joshua Wye from the podcast The Woot and Wye Show believes that Gotsis’ background in Australian football provides him with more endurance than most NFL players, he tells upstart.

“The one thing that translates is having that high motor and a lot of stamina, some of the positives the scouts said is that he is relentless and doesn’t stop,” Wye says.

“Gotsis’ advantage is that he is built to last and play multiple downs, he can play all three downs.”

Gotsis plays as a defensive tackle and was considered amongst the best to play at college in 2015.

Head coach Paul Johnson on the day he signed Gotsis said “I will match him up against almost anybody. He’s 6-foot-5, 300 pounds and can run.”

Really proud of @gotsis96 on being selected in 2nd round! @Broncos just got a great player and even better person

His senior season was unfortunately cut short after rupturing his ACL against Virginia.

However Gotsis showed that he was durable, playing 37 straight matches and recording impressive statistics. He racked up 110 tackles, 27.5 for a loss and 12.5 sacks in his college career.

The knee injury Gotsis suffered had many predicting that the 23-year old would slide down the draft board.
He was touted by many analysts to be selected in the fourth or fifth round.

Wye thought that Gotsis was one of the best talents at the defensive tackle position and was not surprised the Broncos took a gamble.

“I thought he was a second or third round selection, until he tore his ACL” Wye says.

The Broncos’ selection in the second round was in part due to the loss of Malik Jackson to Jacksonville during free agency.

Jackson was pivotal in Denver’s defensive schemes that were so crucial in their Superbowl winning season, and Gotsis is a similar type of player who can play different alignments along the defensive line.

At Georgia Tech Gotsis played in a 4-3 defence, while the Denver Broncos play in a 3-4 defence.

“I think he will fit in well, he can play 3-4 or 4-3 very easily, I think [defensive coordinator] Wade Philips will be very creative with him, you may even see him play nose [tackle] as he is very good against the run” Wye says.

“I have a chance to play … on the best team in the world.”

With Gotsis coming off the knee injury the Broncos will be in no rush to get him on the field. He will be joining one of the most formidable defences in NFL history and will most likely begin as a rotational player.

“I think he will begin as a rotational player, once he gets some snaps in, if he does well then they’ll be forced to keep him out there,” Wye says.