The interviewer becomes the interviewee as the delightful Julia Zemiro reveals memories about her successful career, childhood and love for ABBA. 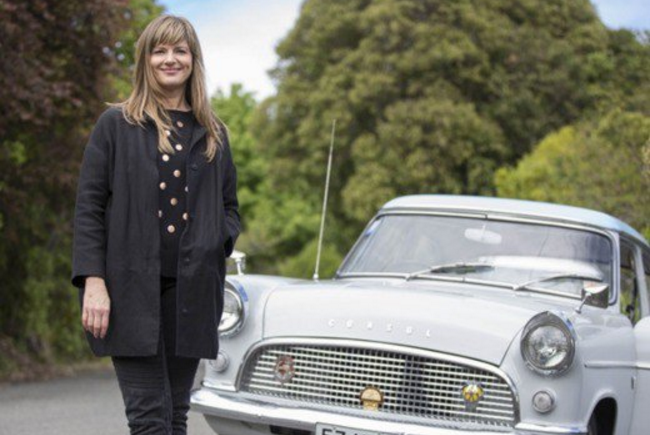 Who can it be now?

Born in 1967 to parents Jane and Claude, she grew up bilingual and can speak fluent English and French. After finding enjoyment at age 14 in drama classes that her mum signed her up for, she has since become the face and host of RocKwiz, Eurovision and her own show Home Delivery.

Why, it is the one, the only, Julia Zemiro!

In true RocKwiz ‘Who can it be now?’ fashion, Julia has rock ‘n’ rolled her way into the hearts of Australians and is one of our most recognisable television personalities.

Julia’s demand and opportunities continue to flourish, including her recent Louis Theroux Live tour with the acclaimed documentarian. Despite her deserved success she is level headed and humble.

While Julia remembers performing at parties when she was young, being in the spotlight wasn’t a life-long ambition.

“I wasn’t one of those kids going… ‘I’ve gotta dance and gotta sing’, it was something with the imagination,” she says.

Julia attended an all-girls school and participated in drama classes on weekends that ignited her passion for theatre as she was able to, “…go somewhere else…and be someone else a little bit different.”

Experienced and wise, Julia’s aware of the hardships of being a performer.

“There’s going to be good periods and dry periods,” she says.

After graduating from the Victorian College of the Arts in 1993, her first gig was with the Bell Shakespeare Theatre Company.

“I could not believe that every Thursday there was a pay packet waiting for me at the ATM…I was in shock.”

“(I) learnt how to keep an audience’s attention.”

Since its 2005 debut, RocKwiz’s live music platform has had immense success with Australian audiences, especially parents.

“We have a lot of people who watch our show who can’t go out anymore because they’ve got kids. They literally say that to us.”

Julia’s RocKwiz audition included producer Brian Nankervis giving her a music quiz to test her own music knowledge – she got 75 per cent. Despite her music knowledge, she didn’t go to many concerts as a child.

“I read a lot of stuff [about music] and listened to a lot of radio,” she says.

She has fond memories of her RocKwiz call back.  “[It was] amazing because you were thrown right in the deep end…So I showed them I could (be) in control (of the room).”

Julia’s RocKwiz icebreaker is ‘What was the first concert you ever went to?’ But what was hers?

Remembered with excitement and vividness, it was ABBA when she was ten years old.

“The two girls [Anna and Frieda] were beautiful and glamourous and they sounded amazing together,” she says.

Julia connects their music, especially The Winner Takes It All, to moments in her life.

“My parents are divorced and it was that song…and you’re going ‘Oh, that’s a song about breaking up, oh is that a song about me?”

“The first year we did it (was) in 2009. In Moscow, walking into the room with all the other press of Europe…and not hearing much English at all. I. Was. In. Heaven,” she says.

Listening to the music is her second nature.

“There’s nothing unusual about it,” she says.

“It’s been fantastic but listening to all those languages when I get there, I just crave.”

Her childhood love for ABBA came to life when she briefly interviewed members Benny, Bjorn and Frieda as part of SBS documentary The Heart of Eurovision.

“A little part of me almost died the day I met them because it was like, dream fulfilled.”

Julia has interviewed diverse people throughout her career and continues to do so on her own show, ABC’s Julia Zemiro’s Home Delivery.

The show “takes some of our favourite [Australian] people down memory lane”.

At first, the idea of her own show didn’t appeal to her.

Currently into its fourth season, every episode Julia has chatted with someone new and seen through the eyes of her guests, including icons Rebel Wilson and Ita Buttrose.

“And that’s what I love the most about the show that every episode is completely different…so it’s never boring.”

Since the global rise in social media and click bait, Julia has noticed the changes in the media industry.

“There’s so much noise [out there],” she says. “There’s so many interesting stories out there that need to be heard.”

Julia’s involvement in the media has recently gone beyond television when she became an ambassador for Our WATCh in May. Our WATCh aims to raise awareness and end violence against women and their children in Australia.

Julia was invested in advocating for change after hosting the organisation’s annual Our WATCh Awards that recognises the best-practiced journalism in reporting domestic violence.

“…Because often it will be you know, ‘Axe murders woman’. And you’re going, well no, ‘Axe didn’t murder woman’. Man holding axe murdered woman. You know, it’s nuts,” she says.

With countless career highlights and moments to choose from, Julia plans on making many more. As for her defining moment?

Hayley Anderson is a first year Bachelor of Media and Communications (Journalism) student at La Trobe University. You can follow her on Twitter, @HayleyAndy1