Friday marked the 10th anniversary of the Bali Bombings. Gatherings were held across our nation in each state in Bali and abroad, to give tribute to the lives lost, including eighty-eight Australians. The 12th of October 2002 will long be known as the day that changed Australia. 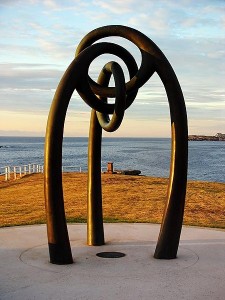 As Prime Minister Julia Gillard said: ‘’This is a moment of real significance for our nation. Ten years ago I think we would all remember where we were and how we felt, how shocked we were.’

It was a day that demonstrated the very real terrorism threat that Australia was facing  and proved that our nation was no longer untouchable.

I remember quite vividly that dark day, ten years ago, as it could have  led to the death or serious injury of my sister.

On the 12th of October in the popular tourist destination of Kuta in Bali, two fatal bombs were detonated across the cities clubbing district; one in Paddy’s Pub and the other in front of the Sari club. The bombs resulted in the death of 202 people and over 240 were injured.

My sister Melissa was staying in Kuta with her girlfriends and had frequented the Sari club every night of her trip so far. It just so happened that on that one particular day their plans quickly changed when her friend was injured in a motorbike accident. My sister recounts the events that she witnessed:

‘We didn’t go to the Sari club at the normal time as my friend had hurt her leg, but then last minute we decided to go as my friend wanted to meet a guy she liked there. We were getting ready when we heard a massive explosion and the windows smashed around us. We then went out the front and saw there were people half clothed and there was blood everywhere. There is also still the picture in a mind of this one guy with his skin peeling off his arms with lots of burns.’

While my sister escaped safely, many others were not so lucky.  In the ten years since the devastating events that transpired, much has been said on the orchestrators of the bombings, their trials, punishments, executions and the counter-terrorism initiatives that have been established as a result. Yet, less attention has been given to the aftermath for the survivors and their families.

Bali memorial attendee Peter Hughes suffered burns to over 50 percent of his body in the bombings. After which he was in a coma for a month, where he nearly died three times. He has had a long painful road to recovery under the guidance of burns expert Fiona Wood.

Hughes has since established the Peter Hughes Burn Foundation and is one of the key players in the lobbying for compensation by the government. Hughes speaks of his ongoing struggle with gaining remuneration:

‘The Government needs to pay – they need to pay the hundreds of people who were affected. We came here for a holiday. We didn’t come here for a massacre.’

It has not been highly publicised that Hughes has spent the past ten years appealing to the Australian and the Indonesian government for compensation for the survivors. It is a battle that still carries on to this day.

While the news of the Bali bombings has generally been focused on the Australians that suffered, becoming known to some as ‘Australia’s September 11th’, there were many non-Australians that were also  killed in the attack. Thirty-eight Indonesian people (mostly Balinese) were killed in the bombings, some were working at the bars and others were party-goers.

Ayu Sila Prihana Dewi was working as a cashier at the Sari club when the bomb was detonated. She escaped with cuts and third degree burns but the mental trauma still remains.

As The Age reporter Tony Wright translates on the bombing aftermath for Prihana Dewi ,‘ Ayu couldn’t face a window, watch TV or sleep alone for a long time, but soon realised others were doing it harder. She gained work as a social worker with the International Medical Corps, consulting other victims of the bombings, overseeing their medication for psychological damage. She spent time with people so traumatised they couldn’t go to the toilet alone. The children of the dead and injured were her main concern. She persuaded them to draw pictures and was disturbed to see so many scrawling blobs of black: burned cars, stick figures lying about’.

Along with the shared grief between Indonesia and Australia, all together twenty-two different nationalities suffered causalities. Twenty-eight British holiday-makers were killed in the bombings. Susanna Miller lost her brother Dan in the terrorism attack. She reflects on her past ten years since finding out the devastating news.

‘The more time passes, the more you realise what they have lost and the more family events they miss. In a way it gets sadder, in a way you miss them more on their birthdays, anniversaries, family events.’

The focus of the Bali bombings is generally not on the people that have been left behind picking up the pieces and it is often overlooked how many of the survivors  and families remain searching for a sense of closure.

Hughes speaks of his coming to grips with the tragedy:

‘If I could take away the scars and the injuries and the post traumatic stress and all the crap that goes with it, I would say that’s the underlying message in terms of what I think about myself as a person. I’m better.’

While my sister was one of the lucky ones, many more lives were taken. The Bali Bombings will be remembered as not only a devastating event in Australian history but one of great loss to the international community.

We will never forget the two-hundred and two victims of the Bali Bombings. While they are no longer in our lives, the survivors and families will remain forever in our thoughts.

Tara Watson is a Graduate of Journalism Diploma student at La Trobe University.