Antoni Gaudi to Barcelona is like Johannes Vermeer to Delft; the city reeks of Gaudi at every corner, and thousands of tourists flock to Barcelona every year to marvel at his fantastical and imaginative designs. As someone who knows little of architecture, I can say that a knowledge of it is not necessary to appreciate Gaudi’s magnificent work. From Casa Batllo, to Park Guell, to La Sagrada Familia; Barcelona for me was a time to marvel at the ingenious artist who inspired other contemporaries such as Salvador Dali, and who to this day brings light, colour and imagination to an entire city. 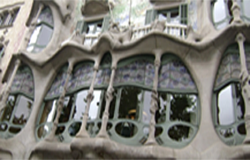 Casa Batllo was commissioned as a residential building for the Batllo family, and was utilised for this purpose until the 1950s when the building suffered damage after the civil war. The building held over a hundred refugees during the war, and is now visited by thousands of tourists every year.  Gaudi was said to be a deeply religious man, and a great lover of nature, animals, and colour. This building deeply reflects these themes; with the characteristic mosaics and the animal-like idiosyncrasies imbedded in the façade.

After catching the metro, and about a 20 minute walk up one of

the longest, steepest hills I’ve ever ventured in my life (I shouldn’t whine, there was escalators most of the way!), I arrived at the well-worth-the-walk Park Guell. What comes upon you then is hard to describe as you enter this magical fantasy of Gaudi’s imagination. It’s as though you have stepped into a Brothers Grimm tale, or some sort of fairy tale filled with wonder and magic. The park and gardens, the ginger bread-esque houses complete with icing and turrets, a house that Gaudi himself lived in complete with his furniture; take one through an amazing journey where fantasy meets architectural brilliance. Park Guell was commissioned by Eusebi Guell who wanted to create a stylish park for the aristocracy of Barcelona (if they could make it up the hill!).

His masterpiece (of which he never saw completed) was La Sagrada Familia. The plans of which are a metre shy of the tallest mountain in Barcelona, Gaudi did not feel as though any man should possess the audacity to construct anything larger than the work of God.  He is said to have felt guilty that the site on which he was to build had to be cleared of its natural elements such as trees and wildlife, so he wished for the church to appear as though from nature. When looking at the spectacular masterpiece (after you’ve caught your breath from its sheer magnificence, size, and detail) you notice that it appears to emerge out of the very soil as a completely natural structure. The beams and supports look like the base of trees with splaying roots, and the interior of the church is a concrete and marble canopy; one has to double-take to make sure they’ve not lost themselves in a forest. The detail on the exterior is unrivalled by any structure in Europe, or perhaps the world, with every crevice featuring sculptures and scenes carved to perfection.

Gaudi sadly passed away mid-construction and did not get to see the completion of the work that engulfed his every waking hour for the last years of his life. The adjacent side of the church is far more modern, and whilst still spectacular, pales in comparison to the original Gaudi (which is just as well, if they tried to outdo him in his death, it would be an insult to his memory).  One must hope Barcelona is their last stop in Europe if they are interested in architecture and/or wish to visit churches in Europe, as everything certainly seems dull for a time after bearing witness to Gaudi’s fantastical splendour.

Alexandra Hansen is a Monash University Graduate and a global adventurer. Follow her on Twitter @allyhan6, and check out her travel blog at backpacksandsewingmachines.blogspot.com.au