Everything you need to know explained. 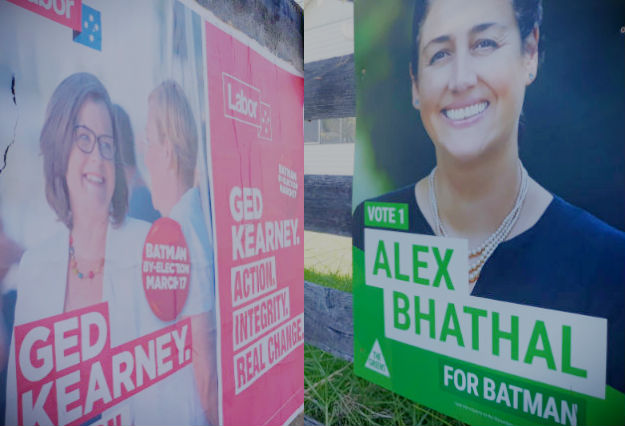 The candidates for Batman's next MP

The byelection for the federal seat of Batman will be held on 17 March 2018, and many students and young adults will be voting for the first time. Here’s all you need to know before heading down to cast your vote.

How did we get here?

The federal seat of Batman was previously occupied by Labor’s David Feeney. A former senator, Feeney had held the post since 2013, and defeated the Greens’ Alex Bhathal in the 2016 federal election. This was despite revelations that he did not live in the electorate and had negatively geared his second property in Northcote – a practice that Labor politicians had criticised their Liberal counterparts for supporting.

After Feeney’s victory, which saw him get home with just a two percent lead over Bhathal, he became embroiled in the dual citizenship saga. Under federal political rules, all MPs must have solely Australian citizenship, and many parties were found to have members that had not officially renounced their second passports and were therefore forced to stand down.

Despite his claims that he had relinquished his British citizenship, Feeney was referred to the High Court of Australia in December 2017 and resigned in February 2018. When these circumstances occur, the incumbent party (Labor) cannot simply replace their fallen candidate with another. The election process has to begin again, and a new MP chosen by the electorate.

Who are the contenders?

This byelection is set to pitch the constituency’s modern rivals in a head-to-head battle. The absence of a Liberal Party candidate means that the result will almost certainly be between Labor’s Ged Kearney and the Greens’ Alex Bhathal.

Although Ged Kearney does not live in the electorate, she had previously been a Batman resident for 20 years. Her career began as a nurse, and she eventually went into Trade Union politics, becoming Federal Secretary of the Australian Nursing Federation. In 2010, she was elected President of the Australian Council of Trade Unions, the highest Trade Union position in the country.

Kearney has sought to nominate for Labor since 2013 but was not preselected until David Feeney’s resignation this year.

Alex Bhathal is a long-term resident of Preston, in the middle of the Batman constituency. She began as a social worker, and has been nominated as the Greens candidate for Batman for every election bar one since 2001.

Bhathal has a strong local reputation, is a well-known community figure in Preston and surrounding suburbs, and has been highly active in the constituency during this campaign.

Where is the Liberal candidate?

The Liberal Party decided against pitching a candidate for Batman. With such strong local support for Labor and the Greens, indicating an electorate leaning to the left, it is generally accepted that the Liberals would have little chance of success. The party therefore decided to focus their energies elsewhere, rather than spending time and resources on what would be a futile campaign, if not a downright embarrassing result for the federal government – something they could probably do without.

It has been reported that Alex Bhathal has a very slender lead in the polls, though what that means is anyone’s guess. All evidence suggests it will be a close contest – both candidates have run a prolific campaign and seem to be in confident mood.

One interesting aspect of the constituency is the so-called ‘Bell Street divide’, in which those living south of Bell Street in Preston traditionally tend to vote Labor, while those to the north favour the Greens. Add to this the perpetual northern migration of young people looking for more affordable rent, and there is a shifting demographic that should provide a tight tussle – and your vote may well be significant in the outcome.

What do the candidates say?

Ged Kearney told upstart why young people should vote for her:

“As a progressive voice inside a party of government, I have the chance to influence the people who could soon be in charge of the country. I think that’s more effective than protesting from the sidelines.”

On Labor’s wider credentials she said:

“Labor has a great and ambitious climate policy that will deliver a change to a sustainable economy. We will stop $100,000 uni degrees, we’ll protect affordable healthcare, reverse cuts to penalty rates and we’ll make renting and buying a home easier.”

Alex Bhathal told upstart that the issues facing young people are those shared by the Greens:

“If we want to ensure future generations are able to prosper on a healthy planet, we need to take strong action on climate change, invest in renewables and make sure that the Adani coal mine does not go ahead.”

She also claimed that only the Greens will address Melbourne’s housing crisis, and doubted Labor’s claims:

“Labor has been all talk and no action on housing affordability. They make a fuss when they are facing an election, yet nothing changes. It’s time to dismantle the rigged system that privileges investors and landlords over the rest of us.”

Polling booths throughout Batman will be open on Saturday from 8am till 6pm.

Stuart Lynch is a third year Bachelor of Media and Communications (Journalism) student at La Trobe University. You can follow him on Twitter @stuball77