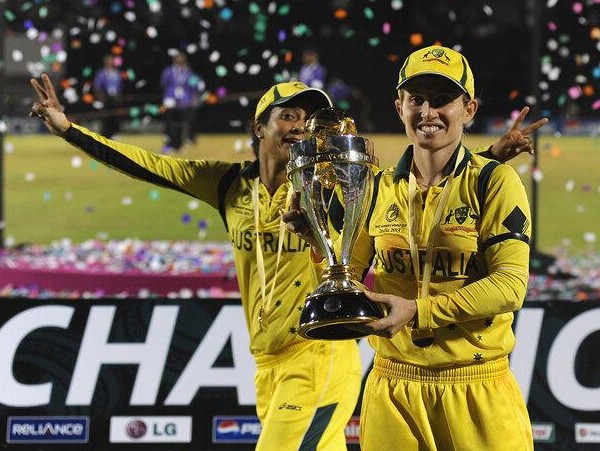 In Australia, cricket has historically been a sport of men, moustaches and beer, but this week women have stolen the spotlight.

Cricket Australia (CA) has announced a restructuring of the contracting system for women’s international and state cricket, which has seen the Commonwealth Bank Southern Stars become some of the best paid female athletes in Australia.

23-year-old Alyssa Healy plays for the Australian and NSW cricket teams and is also a student studying Marine Biology. With such a busy lifestyle, she says the change will provide some security not only for her, but for her teammates too.

“It’s pretty exciting and for someone like me who is a student it just allows me a little more time to work at not only my studies but cricket. So it should help cover off some bills and help pay the mortgage and things like that.”

The step towards greater pay for women in sport has been praised by cricket fans and officials who took to Twitter to show their support.

“I probably follow a lot of cricket people on Twitter but my Twitter feed after the announcement was going nuts and obviously people from a lot of areas, not only the men’s cricket, but also females and male athletes in different sports are jumping on board and showing their support,” Healy says.

Payments for players on tour have also increased, jumping from $100 to $250 per day, meaning that top female cricketers could potentially earn up to $80,000 a year.

While this is a significant figure, it is still over a million dollars less than the maximum earnings of their male counterparts.

Considering the Commonwealth Bank Southern Stars have recently won yet another World Cup title, the remaining pay gap still doesn’t seem to reflect the performance of the individual teams.

Despite the differences, Healy says the team is not the smallest bit worried in the pay gap.

“I think it was maybe 15-20 years ago when the ACA stepped in and helped the boys negotiate their first MAU, so we are 15-20 years behind them. It might happen down the track where our pay will increase to that much, but at the moment I don’t think the girls are even a just tiny bit worried about the pay gap.”

The success of Australia’s elite female cricketers has not only brought bigger pay cheques, but also an increase in overall interest in the sport.

CA Chief Executive Officer (CEO) James Sutherland said: “The recent success of the Commonwealth Bank Southern Stars has led to unprecedented media coverage and recognition, as well as playing a significant role in driving an increase in female cricket participation by 18 per cent in the last 12 months taking us to 180,000 female participants.”

While the women appear to be going from strength to strength, bringing positive attention to the sport, the men’s team has been surrounded by controversy.

Australian cricketer Shane Watson and three teammates were made unavailable for selection for the third leg of the India vs Australia test series, following a breach of team discipline.

Teammate David Warner also made headlines for all the wrong reasons this week, after engaging in a stoush on Twitter with cricket journalists Malcolm Conn and Robert Craddock.

Cricket Australia announces David #Warner has been found guilty of breaching the CA Code of Behaviour and has been fined $5,750 #cricket

Although the blokes are experiencing a rocky patch, both on and off the field, the positive progress of the women’s team has not been overshadowed.

Amongst the conflicting turbulence and success of the teams, Sutherland believes Australian cricket is at its peak.

“It’s an exciting time for Australian cricket. Four of the last seven years have seen record crowds at cricket played in Australia, average TV audiences for cricket rate higher than any other sport and we have 950,000 participants, the highest participants of any Australian sport.”

Healy hopes the move by CA will lead the way for other sports, saying that the success of many Australian women’s teams shows that investments into the sport are worthwhile, not only for women, but for the sport overall.

“We are pretty chuffed and really appreciative of the ACA and the Cricket Australia board that they have come to this agreement and passed through what it has come to today. I think it is an incredible step for us and in women’s sport in general.”

Tahlia McPherson is a third-year Bachelor of Journalism student at the La Trobe University and is one of upstart’s staff writers. You can follow her on Twitter@TahliaMcPherson