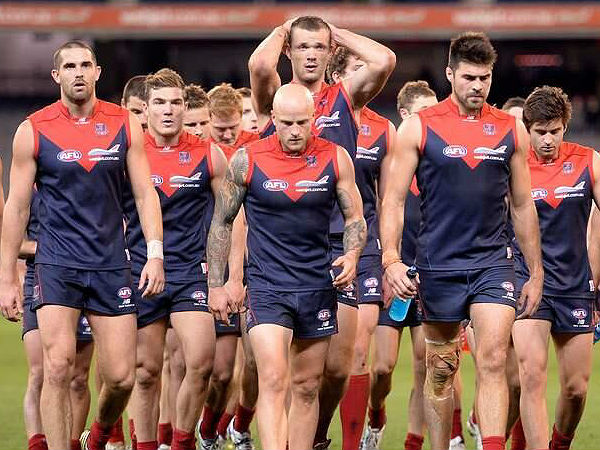 Fuelled by morbid fascination, I made my way to the MCG on Sunday afternoon for Melbourne’s clash with Richmond.

At this point, it serves no purpose detailing the deplorable performances turned in by the Demons in 2013. In an effort to save time, search for every suitable synonym of “terrible,” and that description would suffice.

Having not witnessed in person the 22-car pile-up equivalent that is the Melbourne Football Club in 2013, perhaps an in the flesh account would shine some light on just why the Demons have sunk to the lower depths of football hell.

Before the bounce, the issues plaguing the club were overtly apparent.

As Melbourne trotted out onto the MCG, players didn’t so much as burst through the banner as they begrudgingly pushed through it – seemingly consigned to their fate some 150 minutes or so before it had been decided.

Desire is one of the easiest things to gauge at a game; and the Demons had little to none.

Once the game got underway, drastically substandard skills were on display across the board; the spectre of another long afternoon loomed for the club.

But, then a funny thing happened.

The side unable to catch a break all year caught a couple.

Collingwood convert Chris Dawes was able to snatch a pair of goals in the opening term, Aaron Davey showed flashes of his sublimes skill usually reserved for YouTube montages from circa 2009, and Richmond squandered a series of set-shots.

The listless side that limped onto the turf was gone, and in its place was one at least willing to put up a fight.

Credit where it's due. Demons putting in more than a decent showing till half-time. Good for football if they can keep it up! #afltigersdees

Proverbial spot-fires broke out across the ground, a sign that perhaps this actually meant something – a stark contrast to other times this season.

Despite not being of that persuasion, I began to root for the Dees; supporting them in the same way you would a boxer significantly outclassed and outsized by a superior opponent.

I wasn’t alone in my sympathetic support.

Other football journalists spread sporadically throughout the press box did the same; coaching the club from armchair comfort, disappointingly sighing at every missed tackle, ineffective disposal and poor decision.

Somewhere amidst the seven weeks of thrashings and capitulations, Melbourne had gone from laughing stock to club in crisis, before ending up as the ultimate underdog; a side so ostensibly outmatched, you couldn’t help but cheer them on.

They were David, Seabiscuit, Rocky Balboa, and the Washington Generals all rolled into one.

Yet, as is almost always the case, the little engine that could, couldn’t.

Richmond surged away in the final quarter, ensuring Melbourne would spend another week in AFL hell, and that Mark Neeld’s seat temperature would rise a few more degrees.

However, it was impossible to shake the feeling that Demon fans left the MCG much happier than they have in recent weeks.

Melbourne mightn’t have got the win; but they showed some fight.

Walking past a collection of pre-teen Demon fans kicking a red and blue miniature Sherrin in the MCG car park, I couldn’t help but think at least the effort shown for the most part would send them home happy.