As the app grows in popularity, are people curating their content more? 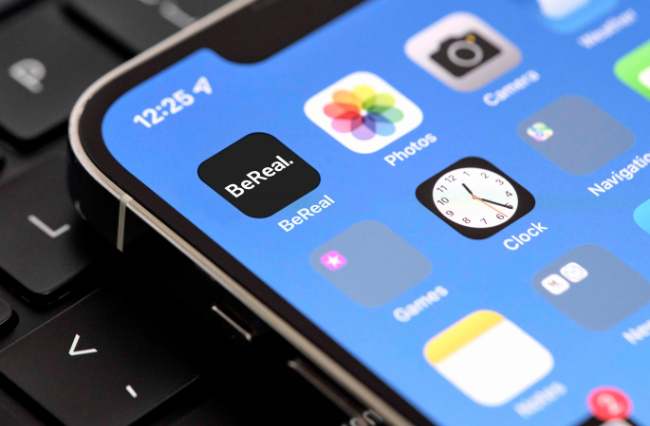 “Your Friends for Real,” is BeReal’s slogan.

The trending platform asks its users to post one totally unfiltered, authentic picture of themselves daily which is prompted by a randomly timed pop-up notification. Users have only two minutes to show their friends what they’re doing, what they look like and where they are in that moment – completely free from any type of editing.

BeReal’s aim at making an authentic space has made many people wonder: Are we ever truly ourselves on the internet?

Second-year RMIT student Emily Kelley, who has been using the app for almost a month, explains she feels as though she’s been able to be more authentic on BeReal as opposed to other platforms.

“I’ll usually be at home in my bed, or on the couch when the notification goes off. It’s easy and casual,” she tells upstart.

Even though BeReal debuted in 2020, the platform has become increasingly popular this year. It first spread widely on university campuses, partially due to paid ambassador programs, from there it began to attract audiences on TikTok. Because of this, BeReal is currently one of the most downloaded apps in Australia, with over 1.2 million users.

For many people who have grown up with social media that often shows posed-picture perfection, BeReal is unique because the app focuses on people’s imperfect daily moments.

“With the app I don’t feel a need to stop what I’m doing when I’m out to take a picture. I’ll get home, do whatever I usually do and that’s when the notification pops up.”

Some users have pointed out similarities between BeReal and Snapchat, both of which boast similar features to each other. The two apps allow users to take spontaneous snapshots of their daily lives, but only Snapchat allows editing and added filters.

Strategic communications researcher Dr Lousia Walsh says she believes the intention of the app is to re-capture spontaneity that has gone missing from social media.

“The people that you’re seeing on social media who are always posting the glamorous holiday shots, or the beautiful restaurants that they’re going to, or the perfect selfie that they had to take 500 photos to achieve, BeReal is actually demonstrating that people aren’t like that all the time.”

However, while BeReal aims for picture authenticity, many people still feel the pressure to post something that isn’t seen as boring. Kelley says there have been times where she’s delayed taking a picture.

“I’ve definitely retaken pictures on it because I’m not getting the best angle. Sometimes I’ll switch room to make it more interesting,” she admits.

While BeReal only gives you two minutes to post, it still allows you to upload a picture later in the day. The condition is that you won’t be able to view your friends’ posts until you upload a picture yourself. Because of this, some users wait until they’re doing something notable to post, which defeats the intended purpose of the platform.

For years social media has been scrutinised for its negative effects on people’s self-image and mental health. For example, many studies have shown correlation between the time spent on social media and having a negative body image. A lot of this is due to one simple fact: most social media out there doesn’t show the full picture. Dr Walsh says that it is only natural that people would still curate and carefully choose what to post on BeReal.

“Whatever the reason may be, for us to show who we are on social media, we still need to do it in a public forum. When taking a picture, we’re still making decisions on what aspects of our life that we want to show, and there are still elements of curation and control,” she says.

This is true for users such as Elena Gillet, who downloaded the app four months ago, and has started to curate her content more as her friends lists expanded.

“Before, when I first downloaded it, I would just take random pictures like of me on my laptop. But now that more people have added me, my content on there has changed a bit.”

As the app grows in users, BeReal may have to change its current method and evolve to keep its promise of an authentic social media experience.

“When we’re looking at things like Instagram or TikTok or any curated photos, we need to understand that this is just a snapshot of their life that they’re choosing to show in that moment,” she tells upstart.

Article | Chloe Ostler is a third-year Bachelor of Media and Communications (Journalism) student at La Trobe University. You can follow her on Twitter @chloeostler.

Photo | “The BeReal App for iPhone: “”Not another social network..””” by Focal Project JP available HERE and is used under a Creative Commons License. The photo has not been modified.