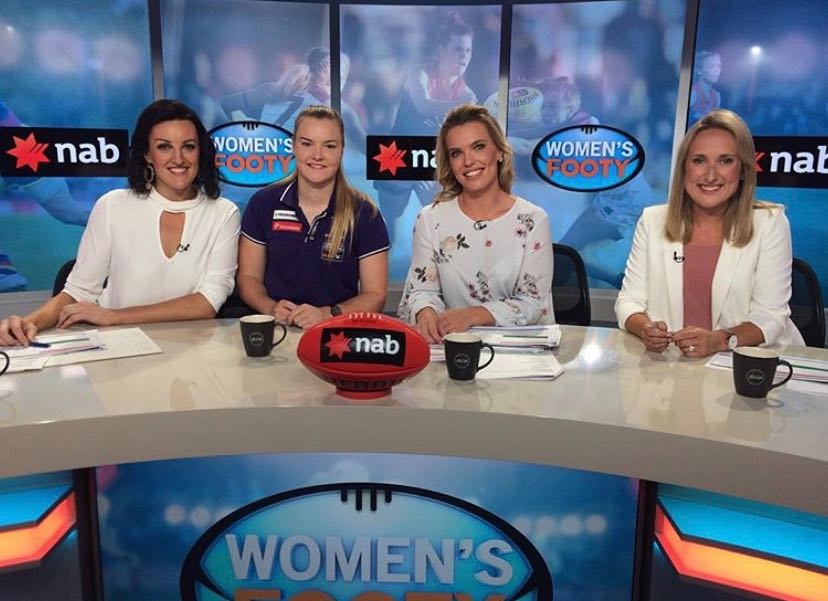 Bianca Chatfield found her new calling in life, swapping her netball dress for the hard hat and hammer. After 13 years on the netball court, Chatfield found herself on the 2018 season of The Block and as a host on Channel Nine’s AFLW Women’s Footy show.

Throughout her netball career, the talented defender showcased her versatility and leadership, often switching between goal keeper, goal defence and wing defence.

With 244 games at a domestic level and 59 caps for Australia, Chatfield has become one of Australia’s most recognised netballers. At the ripe age of 18, Chatfield still holds the record as one of the youngest debutants to play for Australia. She says it was an honour to start her career so early.

“I was over in England playing my first game in Birmingham and I think I came on in the last quarter when Australia was comfortably winning,” she told upstart.

“It was incredible, but it was also probably something that you probably don’t appreciate at the time. It was just a big eye opener to the difference of the intensity and everything at that level,” she said. “Everything completely changes and it’s nothing like you expect.”

The veteran defender was the vice-captain for Australia later in her career, leading the side to some memorable victories over arch-rivals New Zealand. She retired from international netball in 2014 after winning a gold medal at the Commonwealth Games. Chatfield then hung up the dress a year later at domestic level after a decorated career. She says retiring helped her appreciate the little things in the game.

“It’s funny, when you are playing, it’s all about winning and the premierships and the gold medals,” she said.

“But I think when you retire and look back on your career…, the highlight has probably been the people that you meet and the incredible teammates you get to play with,” she said.

“You probably take it for granted while you’re in it but once you’re out of it, it’s like wow I got to do all of that, be great friends with my teammates and travel the world with them while playing for our country it’s pretty incredible.”

Retiring at 32 years old, Chatfield held the record for the most captained games at the Melbourne Vixens, had won two premierships with the club, four titles with the Melbourne Phoenix and a World Cup in 2007.

The tenacious defender was not one to shy away from a fight, and says international counterparts, Romelda Aiken and Kiwi powerhouse Irene Van Dyk were her most challenging opponents.

“I knew they were such great shooters but if I didn’t stop them then they were going to win the game. There was a lot of pressure on me to actually stand up and have a good game,” she said.

“I think being a defender, you kind of feed off that energy and it made me better to know people were against me or that I had the pressure on my back,” she said. “It made me stand up and perform better.”

Although at times some may have labelled her style too physical, Chatfield took ownership for her game play and stood up to the challenge.

“It was something internal that gave me that competitive drive to cope with the pressure,” she told upstart. “I was always heavily criticised for being a physical player, and I got away with a few dirty tricks and tactics that my Aussie teammates would always have a laugh with me about,” she said. “But I was like if the umpire is not pulling me up you’ve just got to go with it,” she said. “No one ever complained if you won the ball for them,” she said.

Although life on the netball court tested her, Chatfield hasn’t taken a step back, entering a new challenge in the leadership sphere.

“I do a lot of work in the leadership space, whether it is public speaking or working with teens or athletes,” she told upstart, “(I’ve been) sharing a lot of experiences that I’ve been through but just trying to provide a positive way forward for athletes that get stuck in a rut,” she said.

After retiring from netball, Chatfield was unsure about what to do next with her life. In a complete change of carer, Chatfield and former teammate Carla Dziwoki entered The Block.

“We both just wanted to do it for something crazy. We were both a bit bored with what we were doing in our worlds,” she told upstart. “I have for a long time always wanted to do that show,” she said. “I would often think about when I would retire from netball and think about do I apply for The Block? Do I retire from netball? What’s the right thing to do first?” She said.

Even though she endured many sleepless nights throughout the filming of the series, Chatfield did not regret a moment on the show.

“I loved it, it was probably the hardest thing I’ve ever done in that time period. Playing netball is super hard but in three months, not having much sleep at all but to have to keep pushing yourself, putting on a calm front in front of camera you know that was really hard, but I loved it,” she said.

Now involved with the media, the former Australian Diamond has her work cut out, heading up an AFLW panel on Women’s Footy and dedicating her time to helping promote the growing industry.

“I love it, there is this positive aura around it and yeah, it kind of sucks you in. Once you get a little bit involved you can’t help but love it,” she said.

Despite already boasting an impressive resume, Chatfield continues to work hard and advocate for the development of women’s sport in Australia.

Photo: [Bianca Chatfield, Hayley Miller, Abbey Holmes and Lauren Wood on Women’s footy] By [Julia Montesano] used under a Creative Commons Attribution. The image has not been modified. (edited)

Taylah Melki is a third year Bachelor of Media and Communications (Sports Journalism) student at La Trobe University. You can follow her on Twitter @MelkiTaylah