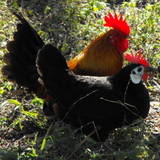 Swooping may not be the only reason to fear birds this Spring.  Bird flu has resurfaced and a new avian paramyxovirus (APMV) has been detected in Australia for the first time, killing large numbers of pigeons in Victoria.

While the bird flu can be deadly to humans, APMV causes mild influenza-like symptoms and conjunctivitis.

Commercial poultry is protected from APMV by vaccination but there is no vaccine available for pigeons in Australia.  According to the Department of Agriculture, Fisheries and Forestry, properties with APMV-infected pigeons have been quarantined as investigations begin into the cause of the outbreak.

Meanwhile, recent developments with the avian H5N1 virus, commonly known as bird flu, have resulted in the UN Food and Agriculture Organization urging heightened readiness and monitoring for a possible outbreak.  The warning follows the emergence of a new strain of the virus known as H5N1 – 2.3.2.1 in China and Vietnam.

In addition to the new strain, the number of H5N1 outbreaks since mid-2008 has been rising and associated with the geographic expansion of the H5N1 virus both in poultry and wild birds.

Also making headlines last week was the death of a six-year-old girl from bird flu, Cambodia’s eighth victim of the virus this year.  The other seven victims were aged between 11 months and 11 years of age and they also died from complications of the infection.

But is the emergence of a new strain of the virus, coupled with increased outbreaks in domestic poultry and increased mortality of the virus in people in Cambodia cause for concern?

The response from the public has been to ridicule the UN FAO warning.  Tweets circulating in the twittersphere, including ‘My eyes red, i feel dizzy plus my head hurt ; i been up all night doin’ hard work. SHIT! i think i got #birdFlU’ and ‘almost stepped on a bird #birdflu’ reflect the general sentiment of the public.

Perhaps the 2009 Swine flu pandemic is to blame for the apparent complacency. Two years ago facemasks were adorned and the manufacture of vaccines fast-tracked as the world prepared for a catastrophe that didn’t eventuate.  Experts fell off their perch when they realised the pandemic wasn’t the life-threatening virus they had been predicting.  Despite this, the World Health Organization confirmed that over 18,000 people died from the pandemic.

Across the globe, the number of confirmed human bird flu cases each year has been decreasing since the peak five years ago.   According to the World Health Organization, 115 cases and 79 deaths occurred in 2006.  This year, 49 cases and 25 deaths have been reported.

Of greater concern to Australia are developments in Indonesia.  Indonesia first reported H5N1 outbreaks in poultry in 2004 and the World Health Organization, has since confirmed 178 people with the virus, 146 of which were fatal.

But what relevance does bird flu in Indonesia have for Australia?

Migratory birds could potentially spread bird flu to Australia if they interact with waterfowl that are nomadic within Australia and New Guinea.  A Department of Agriculture Fisheries and Forestry study has shown that poultry farms in the Atherton Tableland in Queensland are at risk of an H5N1 outbreak if the virus emerges in New Guinea and nomadic waterfowl subsequently become infected.

Migratory birds infected with bird flu show little sign of illness but because they travel great distances, they have been responsible for the emergence of H5N1 in countries where the virus had been eliminated from poultry.  The virus infects domesticated bird species including chickens, ducks and turkeys and kills 90-100% within 48 hours.

The appearance of the new H5N1 – 2.3.2.1 strain is further cause for concern. Existing poultry vaccines do not offer full protection from the new strain and hence the virus is likely to spread rapidly once poultry becomes infected.

Most human H5N1 cases have resulted from direct contact with infected poultry or the secretions / excretions of infected birds.  The virus cannot be transmitted through properly prepared poultry or eggs.

H5N1 viruses do not easily spread between humans but viruses change constantly so there is a chance that H5N1 could mutate to a strain that can easily spread among people.

Professor Terry Nolan, head of the University of Melbourne’s School of Population Health, published an article on The Conversation last week regarding the UN FAO warning.  If the H5N1 virus mutates to spread more easily to humans, ‘it will make the swine flu outbreak look like a Christmas picnic’, he says.

Indeed, the world witnessed a devastating pandemic in 1918-1919 when the Spanish flu claimed the lives of 20 to 40 million people, one third of the world population at the time.

Interestingly, the H5N1 virus has been shown to have structural similarities with the 1918 virus, a bad omen if the virus ever mutates into a pandemic strain.

Only time will tell if the latest developments on the bird flu stage have set wings in motion for a bird flu pandemic.  But one thing is certain: the world cannot afford to let its guard down.  Bird flu may have fluttered in and out of the news recently but you never know when it may end up in your backyard.