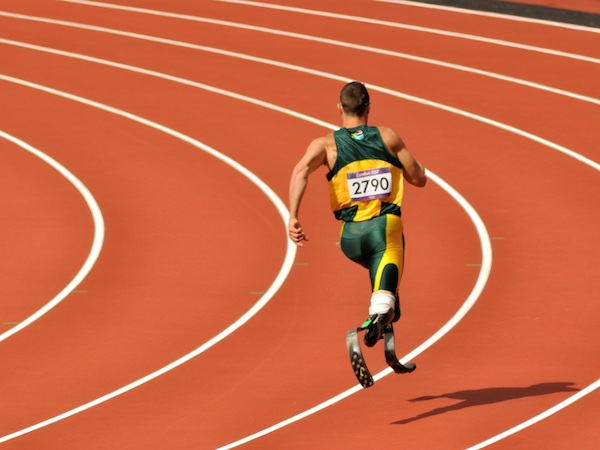 At 27, Oscar Pistorius has a good three to five years’ worth of competitive athletics left in him. But the fact that he is capable of competing, doesn’t mean he should.

Earlier this week, the International Paralympic Committee (IPC) said that despite Pistorius’s conviction for culpable homicide, he would be free to compete in the 2016 Rio Paralympic Games.

There is a possibility that Pistorius could walk free from court when he is sentenced on October 13 for killing his girlfriend Reeva Steenkamp. Whilst there is a maximum sentence of 15 years for the crime in South Africa, there is no minimum jail time associated with the charge.

If the latter prevails, the IPC will not stop him heading back to the track and training for gold in 2016.

Achieving such goals requires all of the clichés seen in any Rocky movie. Pistorius certainly knows how to overcome adversity considering he battled hard to compete at the 2012 Summer Olympics amongst able-bodied athletes. But one ultimate factor in our athletes that some overlook is their character.

The development of character and personality in a person is much like a competitive sport. Psychiatrists like Mark Banschick argue that sport itself is an actual allegory for life, and the choices you make that define your character can be aligned with choices in a sporting arena.

Pistorius has been accused of serious crimes – surely his character is not suitable to represent his country. Why should he still be in the public eye once this trial wraps up?

Whether they like it or not, professional athletes instantly must become a role model as soon as a contract is signed. Sure, the ‘always be a good person’ clause is not in the contract, but it is expected that you act like one. Kids look up to you. Parents warily expect nothing but upstanding people representing them both locally and internationally.

But as we learnt on Valentine’s Day last year, the story of Oscar Pistorius took a dark turn, and the back page stories turned into front-page headlines.

This is not the first instance in which a sportsman has been treated as what can only be described as lenient.

The NFL is in fact embroiled in such a case right now. Former Baltimore Raven running back Ray Rice, who in February knocked his fiancée unconscious, continued on with his career like nothing happened after a two-match suspension from the NFL in July. Only when footage of the incident came into the hands of TMZ, did Rice get the treatment he deserved – an annulled contract and banishment from the league.

Additionally the NFL, and The Ravens look like fools for not treating the situation with the seriousness it deserved. Rather, the NFL prolonged the affair from one misstep to another.

The parallels between Rice and Pistorius case are scarily uncanny. The sprinter in the past had been called a dangerous man by a previous girlfriend, and he couldn’t keep out of trouble while the trial was going on, embroiling himself in a fight in a Johannesburg nightclub. While the full extent of sentencing wont be known until October, the blade runner isn’t doing much to redeem himself while he remains on bail.

Whether these athletes like it or not, we as people are always desperate for role models. Sport is the easiest area to find them. They are in the public eye a lot whether on the field or through endorsements. Pistorius has failed at this dismally.

He shouldn’t be celebrated as a good human let alone compete as a sportsman because of what he did. The IPC, by opening the door for Pistorius to compete in Rio de Janeiro, are showing they are willing to turn a blind eye to bad behaviour.

The IPC code of ethics state that all paralympians should “conduct business with integrity, maintain a high standard of personal conduct and avoid any behaviour or action that would tarnish or give the impression of tarnishing the reputation of the Paralympic Movement”.

It would be strange to argue that Pistorius would not be tarnishing the reputation of athletics with his presence at the next Paralympics. After all, he was found to be horrendously careless in his treatment of another human life. That alone should warrant his ineligibility to compete.