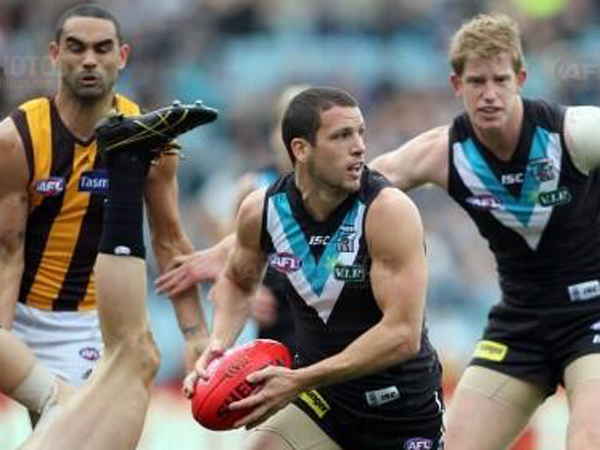 Without Boak’s signature, it’s difficult to imagine Port Adelaide in the position it’s in now – preparing for a semi-final encounter with Geelong at the MCG, tonight, just 12 months after finishing 14th and winning one more game than Melbourne.

It’s fitting that the very team that attempted to lure him east will be his opponent tonight. How quickly the worm can turn in the AFL these days.

Geelong’s method to court Boak was as shameless as it was overt. Admittedly it takes two to tango – but Chris Scott’s brazen attempt to lure the Port midfielder drew criticism from areas of the media (notably Paul Roos) and predictably, Port Adelaide’s CEO Keith Thomas.

Geelong champions Joel Selwood and Jimmy Bartel joined Scott in Adelaide, mid-season, in a bid to entice Boak to the Cattery, ultimately to no avail. It was an unprecedented show of arrogance that divided the football public.

At the time, Geelong said that the approach epitomised the new AFL marketplace – the reality of the sport as a corporate enterprise, with players as commodities.

Contrastingly, Port labelled the move, towards its highly valued and contracted player, disrespectful and saw it as an egotistical shot to its brand.

“We respect the Geelong Football Club very much, but if Matthew Primus, Domenic Cassisi and Travis Boak were to bowl into Geelong to meet with Joel Selwood, I am sure (Cats chief) Brian Cook, his players and supporters would feel more than a little disrespected,” CEO Keith Thomas said, in an official club statement.

Contact via phone, managers, and officials channels is one thing, but face-to-face meetings during the year reeked of business not yet publicly seen in the AFL landscape.

Boak’s decision to stay – despite the lure of a reportedly tempting sum of money, regular home-cooked meals from his parents in Jan Juc (south of Geelong) and a chance for a premiership – was the key turning point in Port Adelaide’s fortunes.

It’s not quite a fairy tale, but at the very least it is a feel-good story nobody outside of Geelong wants to end just yet.

Three wins in 2011 and five triumphs last year became 12 in 2013, with an elimination final victory over Collingwood the 13th victory, in what has been a remarkable resurgence.

Fundamental to this rise is Boak, a jagged-turned-polished ball-winner who is now capable of stealing a game off his own right boot.

The 25-year-old is ranked second at Port Adelaide for disposals this season, averaging 25.2 per game and fourth in the league for inside 50s.

In his two matches against the Cats this year, Boak has collected 28 and 30 possessions respectively.

Two early goals in the 2nd Q to @PAFC keep them in touch of the Hawks, who lead 42-26. Chat: http://t.co/UUeoYqVWG0 pic.twitter.com/CLAgYZ5ctl

But it could have all been so very different. Sliding doors moments are synonymous with hindsight – but Boak’s decision to stay, despite a face-to-face in-season meeting with Geelong’s hierarchy, was the significant moment in this narrative.

His re-commitment was a win for the culture of the club. It was also a show of defiance from a player who had, up until that point, promised so much, but on a gallingly inconsistent basis.

At the time he was too old and experienced to be considered a work in progress, but too young to fully accept the responsibility of a sinking ship.

The longer he didn’t sign and the more games Port Adelaide lost, the more likely it appeared he would head home. And had he chosen to leave, Port Adelaide may have lost a few more in a mini-exodus.

And who could have begrudged him for leaving, aside from those at Port? It was a struggling team without a senior coach and a list not just lacking a backbone, but also heart.

It is hardly a selling point for a player’s signature – especially when confronted with a team that has won three flags in five years and is the town of your birthplace.

Instead he is skippering a club that is a fortnight away from a grand final.

Weeks after Boak signed, Hinkley was appointed coach. The two men are Victorians, but have forged a partnership in Adelaide that looks as functional as the club was dysfunctional, prior to their coming together.

“I didn’t know how good my captain was going to be in his first year and how he was going to lead the club… He has been outstanding,” Hinkley remarked prior to Port’s memorable four goal victory over Collingwood on Saturday night – its first finals victory since 2007.

“As a young captain in the competition, plenty of them get some worthy recognition.

“This fella (Boak) probably hasn’t got as much as he perhaps deserves.”

And so the wheel has turned in the right direction for Boak and Port Adelaide. Last year the average crowd at AAMI stadium was a paltry, and record low, 19,911 – this season it’s risen to 26,915.

As captain, he’s perfectly placed to lead his team out against Geelong, safe in the knowledge that his decision 54 weeks ago has had a monumental effect on his teammates and supporters – all of whom will be hell-bent on defeating the very club that attempted to sign him.

But regardless of what happens tonight, this brave and commendable call has inadvertently opened the premiership window far sooner than anyone, including Boak, could have expected.