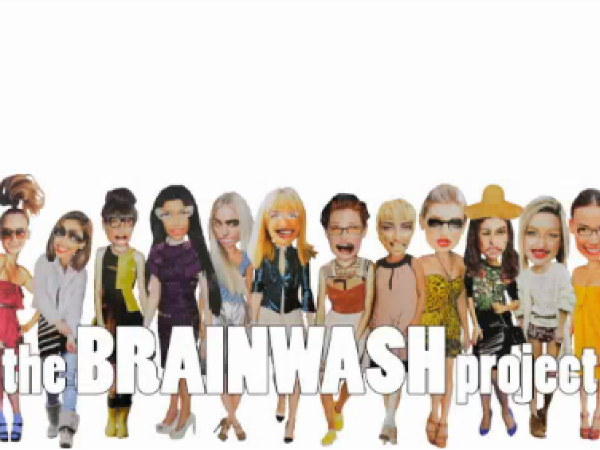 In retaliation, she has just launched her 188-page ‘zine for teen girls – Brainwash Magazine. This was no easy feat; Barlow coordinated over 100 people to produce the publication, with the help of donations and crowdfunding.

“The insipid magazine culture that took over my high school was definitely what got me thinking that there had to be something better out there for girls my age to be reading. Later when I studied writing at RMIT I realised that I could be the one to bring about that new content,” says Barlow.

The full-colour magazine was launched on April 26th this year and it includes more than just airbrushed hotties and boyfriend tips. Brainwash Magazine caters to a wide range of girls, from all walks of life, of all sizes and of all beliefs. The publication covers a wide range of topics with varied points of view and ideas that allows the readers to think for themselves.

Which begs the question, are women’s magazines presenting a sexist, unrealistic expectation and in turn damaging a young woman’s self esteem?

Open any mainstream women’s magazine and what do you see? Tips on how to sculpt your body better, how to do your make-up sexier, how to dress, how to get a boyfriend, how to keep a boyfriend and how to please a boyfriend. Maybe there’s some truth to what Barlow is saying.

“Mainstream media is primarily after the dollars in your pockets. They want you to feel as though you need makeup or hair straighteners so that you, or your parents will spend money buying them,” says Barlow.

From starting out writing blog posts analysing how women’s magazines are brainwashing us, Barlow has established a more transparent and responsible approach to sustaining a healthy body image within one of Australia’s most popular women’s magazines, Cleo. In August, 2012, Barlow launched her campaign against the airbrushing of magazine models. The campaign was noticed by media outlets such as Mama Mia, and resulted in Barlow featuring in Paper People; a documentary by filmmaker Francis Hadid.

Barlow’s campaign was successful after receiving 22,000 signatures on her online petition.

Resulting from this petition, former Cleo editor, Gemma Crisp decided to publish their photoshopping policy within the front pages of every issue.

However, it has not been easy. Barlow has her critics, and only the belief in what she was doing has kept her going.

“It was very difficult being thrust into the media last year with no preparation and facing a lot of online hate and criticism. I feel that the experience has only strengthened me as a person however.”

But it doesn’t stop there. Barlow has even grander plans for the future. She is now working towards furthering Brainwash Magazine into a publication that empowers teens by not only distributing the magazine to them, but by also allowing them to choose and contribute to the content.

“The next step is registering the Brainwash Project as a social enterprise this year and the goal is to run the magazine off subscription 4 times per year and to have it put together by teens for teens,” Barlow says.

This just shows that if you have enough motivation and are willing to work hard, you really can achieve anything.

Indeed Barlow says anyone can get their dreams up and running if they have enough self-belief.

“Never let money be an obstacle. If you believe in the project, then chances are someone else out there will too – you might not know them right now, but if you don’t try then you never will. If there’s a will there’s a way and it will all work out in the end. Go for it.”

Cleo has since made further moves to make their publication less superficial and feature more real and diverse issues. With ex-Sunday Telegraph political reporter Sharri Markson taking the helm, the publication claims to be re-vamped and the response has been positive.

So next time us girls open up our favourite magazine, maybe we won’t be bombarded with messages of necessary self-improvement. Instead because of people like Jess Barlow, we’ll see how we can be happy within our own skin.