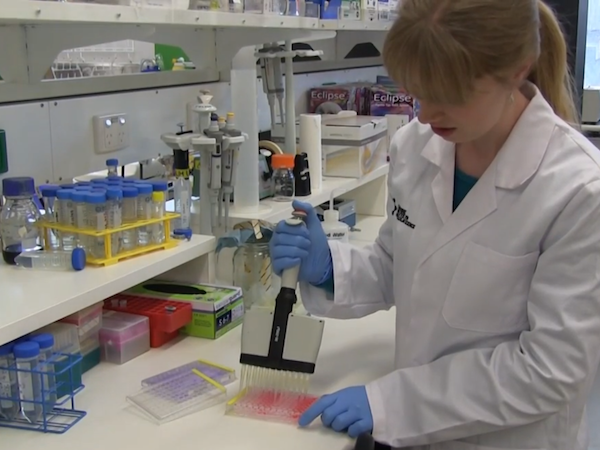 Researchers from the La Trobe Institute for Molecular Science (LIMS) have made a discovery that might help prolong the lives of cancer patients.

Dr Amelia Johnston, Professor Nick Hoogenraad and research assistant Laura Jenkinson were part of the team who made the discovery.

Last month, they identified that a molecule called Fn14 precipitates a disease called cachexia, a common side effect of cancer.

Cachexia is a wasting disease which affects 80 per cent of Australian cancer sufferers.

The disease alters metabolism, and causes weight loss, predominantly in the form of muscle atrophy, which causes weakness, fatigue and anaemia.

When a cancer patient develops cachexia, it often makes them too weak to be treated.

30 per cent of cancer-related deaths are attributed to the presence of cachexia.

Currently, there are no Australian Drug Evaluation Committee (ADEC) approved drugs for use in treating cachexia, but the team at LIMS are striving to change that.

“The idea that we could potentially treat this cachexia in cancer patients is of huge significance,” Johnston tells upstart.

Usually cancer patients with cachexia are unable to receive treatments such as chemotherapy and radiotherapy due to their emaciated state.

“If when we develop a treatment that is suitable for humans, if that is successful, then it should allow cancer patients to maintain their quality of life, as well as their muscle tone and strength,” Jenkinson tells upstart.

Johnston says the next step is to trial the treatment in a format suitable to test in humans.

“We’re doing this at the moment with our collaborators and colleagues at the Olivia Newton John Cancer Research Institute,” she says.

“So once this is complete, we’d then be able to initiate clinical trials. But this is quite a lengthy process, we’re looking at two to three years.”

Xavier Martin is a third-year journalism student at La Trobe University. He joins the upstart team this semester as a Multimedia Producer focussing on video, interview, podcast, radio, sound and imagery.