The dates for Tokyo may have been postponed, but Brendon Smith's focus remains the same. 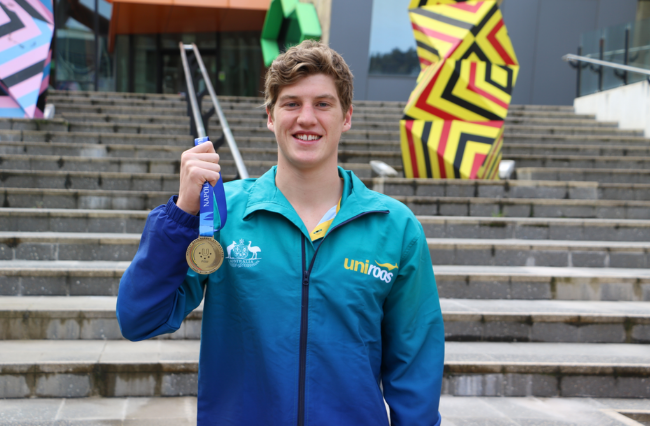 Brendon Smith is one of Australia’s most promising young swimmers, but talking to him, you wouldn’t know it. Beneath Smith’s calm persona, lies a competitive fire that separates him from his competition.

Smith was pre-selected for the 2020 Olympic games in Tokyo, but now may have to wait another year until finding out whether Tokyo will be where he makes his Olympic dream a reality.

“That (the Olympic team) is not finalised, how we qualify is we have a meet five weeks out, and you have to go under the FINA (The International Swimming Federation) qualifying time and get top two in that race. It doesn’t matter how good you are, if you don’t perform on that day you don’t make it. We won’t know until then,” Smith told upstart.

Smith grew up in Nunawading, and while he was thrown into the pool at a very young age through his parents’ enthusiasm for the sport,  it wasn’t until later in life it became something he thrived in.

“When I started swimming, I wasn’t good at all, up until I was maybe 15 years old was when I started to improve a lot and grow a lot. I started training harder, so probably until then I was in the shadow of my sisters who were always good at a really young age.”

“I was swimming really young, both of my parents used to do a lot of swimming. I was in the water really young, [I] started competing when I was about 7.”

Smith’s biggest influences are his parents, but he also looks up to Ian Thorpe and Michael Phelps, along with Mack Horton at the 2016 Olympics. Although, he believes he also owes a great deal of his success to the Nunawading Swim Club.

“I wouldn’t be the swimmer I am if I didn’t have access to a club that has great learn to swim programs all the way to elite level swimmers. It’s not something that is common to many clubs across Australia.”

With the world trying to come to grips with its new normal, Smith, like other sportspeople, is just getting back into his normal routine. For Smith that means early mornings, and punishing training sessions, something he is used to.

“I’ve grown up with it, it’s kind of all I’ve known, so it’s not like I feel like I’m doing more than anyone around me, because of my squad and sisters, so it’s sort of the norm for me, but it’s a lot of work.”

After returning to the pool recently after a COVID-19 ensued break from the water, his days are back to being jam packed with training.

The reason Smith trains so hard, is because he knows how close he is to being the best he can be, and he also knows how to achieve it.

“The one thing I wish I knew before competitive swimming was how important skills are, right now I have to work on my skills time. My swim time is good but my skill time is better.”

When Smith is in full training, his diet and calorie intake is a priority.

“Yeah for me I have a pretty high metabolism, so I need to be constantly eating, especially when I’m in hard training I almost can’t eat enough. I had a session over Christmas where I burned 3500 calories for that session, you can’t eat enough to get that back.”

Brendon Smith is a hard-working young Aussie athlete, and while we won’t know for a little while yet whether or not his Olympic dream will become a reality or not, we certainly hope to see him succeed, come Tokyo 2021.

Konstantinos Diamantopoulos is a second-year Bachelor of Media and Communication student (Journalism) at La Trobe University.