A new set of issues have been raised around race and sport in Australia. 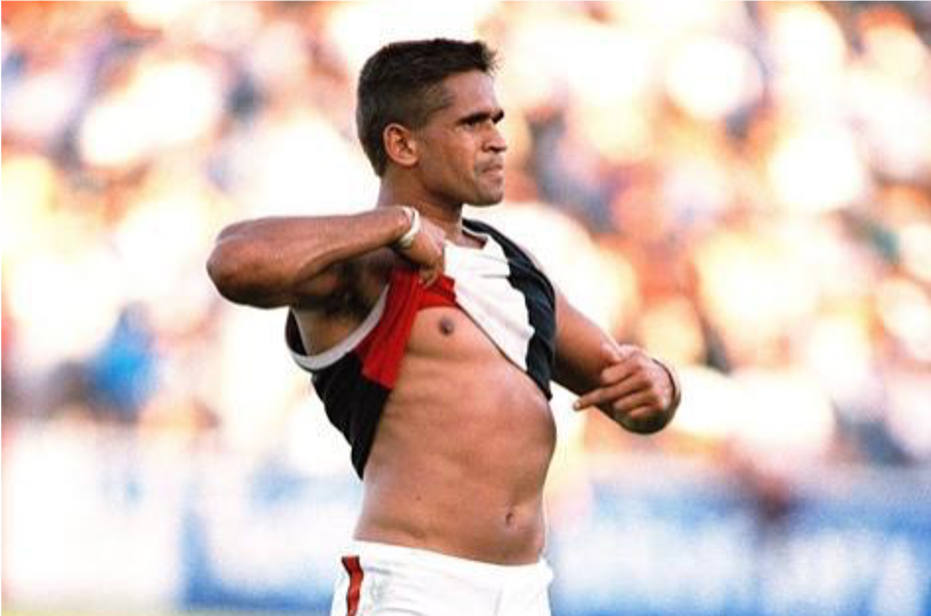 Now, the same issues raised in this period have been rekindled by the the recent release of documentaries highlighting crowd racism and the media backlash experienced by the former Swans captain Adam Goodes, confirming that the issue still permeates throughout sport in Australia.

It was back in the 1990s that society’s understanding and tolerance of racism began to change, and this was reflected on the footy field.

In 1993, Nicky Winmar exposed his skin at Victoria Park in response to racial attacks from Collingwood fans. With passion and defiance, he remarked: “I’m black and I’m proud to be black.” It is now considered one of the most iconic moments in Australian sport history. During the first Anzac Day match in 1995, Michael Long called out Collingwood ruckman Damien Monkhurst, after a series of racial taunts were directed at him.

Australian sports journalist and author Martin Flanagan, who focuses on the relationship between Indigenous and non-Indigenous Australians believes that social tensions frequently manifest first in sport.

“Australia had this long-running, unresolved and marginally undiscussed issue of its treatment of Aboriginal people and that burst through the surface of the game,” Flanagan says.

Flanagan claims Long refused to accept the AFL’s treatment of racism, and was supported by an unlikely crowd.

“There was this unprecedented case where a largely white constituency, which is the world of football followers, backed a black man against the white institution – the AFL,” he says.

Since these key moments, both Winmar and Long have pioneered in their own ways, promoting their community and attempting to bridge the cultural gap.

Long established ‘The Long Walk’ charity in 2004 – existing now for 15 years, the walk from Federation Square to the MCG is a precursor event before the Dreamtime at the ‘G clash between Richmond and Essendon.

Meanwhile, leading up to the Sir Douglas Nicholls round, celebrating Indigenous Australian players this year, St Kilda launched their Reconciliation Action Plan (RAP), using Winmar as the face of their campaign. The two-time St Kilda best and fairest winner said he was proud to be involved in his old club’s RAP and that the plan was deeply meaningful not only to himself, but also the extended Indigenous Australian community.

“Looking back at my career, it was a touching move from St Kilda. It is important to be a part of the club and to support programs like this,” Winmar told upstart.

According to Flanagan, compared to other popular sports, the AFL’s endeavour to bridge the cultural gap between Indigenous and non-Indigenous Australians has evolved since this time.

“The AFL, however badly it might be seen as doing, is still ahead of the prevalent attitudes and the culture,” Flanagan says.

These days, there is an array of Indigenous-focused programs and events, including the Flying Boomerangs (men’s under 16 talent program), Woomeras (women’s under 16 program), Sir Doug Nicholls round (Indigenous round) and the Indigenous academies that clubs have established.

Despite the AFL’s stringent efforts to combat racism, the issue still exists and Flanagan says the right-leaning side of Australia’s political landscape will taint the national game.

“In the world where you have got Andrew Bolt, Alan Jones and Pauline Hanson in this culture who are actively ramping up racial tensions, it is going to impact on Australian football,” Flanagan says.

“There is this gross unreality that people think you can have racism outside and you are not going to have racism inside.”

Greg Baum, The Age’s chief sport columnist, says that AFL crowds are still a problem and should be at the top of their agenda.

“That is where the AFL needs to concentrate its attention,” he told upstart.

“Minimising and eliminating racism must be part of the game’s charter.”

Baum says the messages conveyed by the Goodes documentaries are self-evident, but it clearly brought the issue forward.

“What their release did was to give impetus to a change of attitude in the AFL,” says Baum.

Baum claims that previous leaders would have been reluctant to speak out, but in light of recent circumstances, AFL CEO Gillon McLachlan lead from the front.

“McLachlan accepted this year that the league had to speak out, no matter the risks,” he says.

Nicky Winmar also attests to this existing problem, but says it’s coming from another source, now.

“There used to be a lot of racism from the other players, but now it is more from the spectators,” says Winmar. “I say enjoy football while you can and respect players from all kinds of backgrounds. I am still black and proud.”

In an attempt to find common ground between Indigenous and non-Indigenous Australians, Flanagan’s laconic, but meaningful message to the AFL is: “Listen to Indigenous people”.

Article: Jonathan Catania is a first-year Bachelor of Media and Communication (Sports Journalism) student at La Trobe University. You can follow him on Twitter: @joncatania03

Photo: Nicky Winmar’s famous protest at Victoria Park against Collingwood in 1993 by Wayne Ludbey used with owner’s permission. The photo has been cropped.