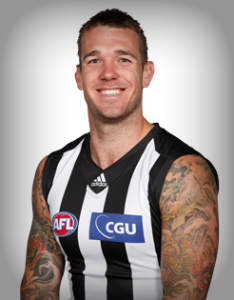 After three rounds, the reigning Brownlow medallist was accused of lacking intensity and being too heavy.

Fifteen rounds on, and the ‘stocky’ on-baller is in the box seat to win back-to-back medals, as he starts to assert his domination back on the competition.

The Magpie polled 21 votes in the back half of last season to win his first Brownlow medal in convincing fashion, and the same fitness that saw him tear apart the competition late last year is starting to shine again.

The Pies’ No.36 picked up 38 touches, eight marks and five goals in arguably a best-on-ground performance against Greater Western Sydney on Saturday.

The week before, Swan racked up a career-high 49 disposals and kicked two goals against the Hawks in a losing side.

But everyone knows he is not without weekly competition.

Teammate Scott Pendlebury, who finished equal fourth in the count last year, was a raging favourite for the prestigious medal earlier this year before injury sidelinded him for four matches.

But Swan is a proven vote getter, and has already had standout games this season where he is sure to poll well.

On Anzac Day, he hit back at critics who had labeled him ‘fat’, racking up 42 touches along with three goals to win the ANZAC Medal.

Since then, he has collected 40-plus touches another four times, and the stats are showing he is on target to beat last year’s figures.

In 2011, Swan averaged 31 disposals a game during the home-and-away season.

This season he averages 36, and on current form is sure to keep piling on the numbers.

Champion Data, who runs a Brownlow predictor each year based on their ranking point system, released their predictions after Round 16.

The statistician experts, who have been fairly accurate in predicting previous medal winners, have the Pies on-baller at just 14 votes through the first 16 games, with teammates Scott Pendlebury on 16 votes and Dayne Beams on 12 votes.

But two rounds on, Swan should have at least three more votes to his name, possibly four or five, and at last year’s count, Swan stole the three votes when teammate Pendlebury was expected to poll.

The 28-year-old sits equal with three others in Brownlow betting at $6 to win the medal, along with Gold Coast captain Gary Ablett, Adelaide midfielder Scott Thompson and Essendon skipper Jobe Watson.

The Bomber, son of AFL Hall-Of-Famer Tim Watson, is predicted by Champion Data to be leading the count after 16 rounds, on 26 votes – 12 ahead of Swan.

But Swan is a proven vote-getter, in fact, he polls more threes and twos than any other player.

Swan received three votes in seven games, and two votes in six. He received one vote only once.

Hawthorn’s Sam Mitchell was the only player last year to poll more threes than Swan, polling eight threes and finishing second in the count with 30 votes.

But not only is Swan a favourite with the umpires, the 2011 Brownlow medallist is having a better campaign stats-wise than he did last season.

Swan also ranks third for handballs, and in Supercoach points per game (the same points Champion Data uses to predict their counts).

Although Swan may not be regarded as classy or a clean ball user like Pendlebury or Chris Judd, he gets plenty of it, and is sure to keep the umpires on notice.

And with Swan proving last season that he can finish a season off in style, expect the magpie to make a late charge on Brownlow night.