After failing to secure a trade last year, Adelaide and Carlton have finally come to an agreement to trade Bryce Gibbs. 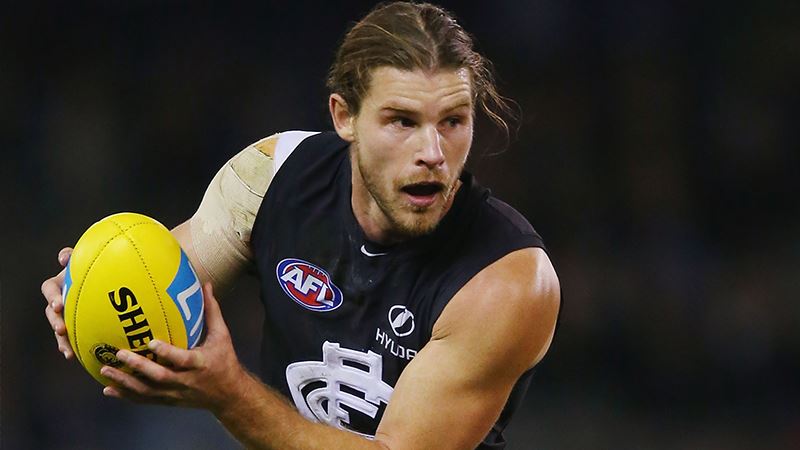 Bryce Gibbs is officially a member of the Adelaide Crows more than a year after requesting a trade to South Australia.

The Blues held firm on trade discussions involving Gibbs during the 2016 trade period as the Crows refused to give up two first-round draft picks.

Despite negotiations breaking down last year, supporters from both sides seem happy with the deal.

I love Bryce Gibbs but that is some great business from @CarltonFC . Holding out for 12 months was the right move @traderadio #BoundByBlue

In the end, it is a similar deal that lands the star midfielder at Adelaide Oval, with a deal being agreed upon on Thursday morning.

The Blues have also offloaded pick 77 and their second and third-round picks next year to the Crows.

The 28-year-old will be a handy addition to the Adelaide midfield group that will be looking to atone for the disappointment of losing the AFL Grand Final.

“This deal presents much better value compared to what was first discussed 12 months ago with the return of future draft picks from Carlton, in what we consider a very strong draft, a key component for us.

“To be able to bring in an A-grade midfielder and improve our position for next year’s draft is a great result for our club.

“Bryce is not only a quality player, but a quality person as well and he will have an immediate impact on our playing group both on and off the field.”

Carlton List Manager Stephen Silvagni thanked Gibbs for his 231 games and 137 goals, which spanned over an 11-year tenure.

“We feel we have reached a deal that is in the best interests of the Carlton Football Club and in doing so, Bryce returns to his home state,” Silvagni told the Herald Sun.

“We now currently hold picks 3, 10 and 16 which was an opportunity we couldn’t pass up as a side continuing to build its depth.

“We wish Bryce, fiancée Lauren and their son Charlie all the best for their future endeavours.”

The 2006 No. 1 draft pick will join this year’s grand finalist on a four-year deal.

The deal is the first of many likely to be completed on the last day of the 2017 AFL trade period.

The swap of picks and inclusion of Gibbs is likely to pave way for Adelaide speedster Charlie Cameron to move to Queensland, while blockbuster trades including Gary Ablett and Jake Stringer are expected to be finalised later in the day.

Here is the first look at Bryce Gibbs in the Crows tri-colours.