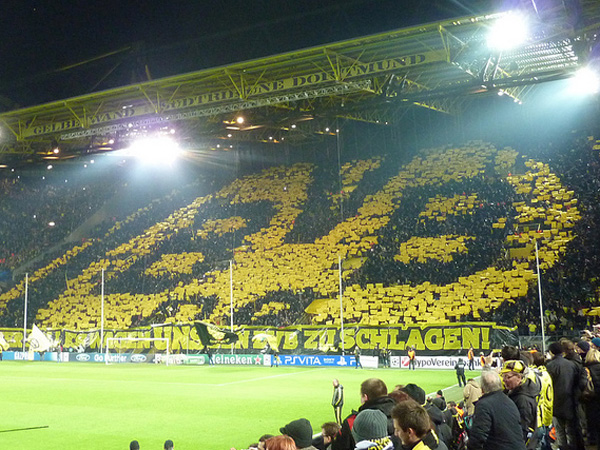 The English Premier League can no longer claim to be the best football league in the world. Instead, the mantle has been bestowed upon the new jewel in European football’s crown.

A survey by World Soccer magazine recently recognised the German Bundesliga as the best football league in the world, ranking it ahead of the more popular English Premier League and Spain’s La Liga.

The survey took into account a range of different factors, in order to identify which league is best. Average league attendances, finances, goals scored, and competitiveness in continental competitions were all considered. The survey also took note of the calibre of managers and players, quality of stadiums, and the number of players who represented countries at the 2010 World Cup.

The Bundesliga scored 60 points, well ahead of the Premier League (55 points) and La Liga (46 points). Italy’s Serie A and Brasil’s Brasileirao rounded out the top five.

Correction re: last tweet: This World Soccer survey of world’s best leagues of May 2013 (not 2012) edition twitter.com/sportingintel/…

The Bundesliga has well and truly flown under the radar in the past few years – it seems only recently that people have begun taking notice of it. It wasn’t long ago that Serie A, La Liga, and the Premier League garnered all of our attention, while the Bundesliga was barely mentioned.

This is no longer the case. Nor should it be, when you consider what has occurred over the last 48 hours. The best indication of the Bundesliga’s strength to date is it’s success in the UEFA Champions League.

Four teams remain in the competition; Bayern Munich and Borussia Dortmund from Germany, and Barcelona and Real Madrid from Spain. On Wednesday morning, Barcelona (who are widely considered the best football club in the world) were completely dismantled by Bayern Munich, losing 4-0 in the first leg of their semi-final tie. On Thursday morning, Borussia Dortmund dispatched Real Madrid 4-1 in a very similar fashion. Borussia’s striker Robert Lewandowski scored each of their four goals in the rout.

Over the 180 minutes of football played, German teams scored 8 goals, while the Spanish could only manage one. In all likelihood, this will probably result in an all-German Champions League final.

World Soccer magazine’s survey also took into account the competitiveness of each league. The Bundesliga was found to be one of the closest in Europe, with most teams capable of beating any other side. There are exceptions; when it comes to some of the bigger clubs like Munich and Dortmund, but the rest of the league is so close that only nine points separates 4th from 13th.

A different survey, from Compare The Leagues, found that the Bundesliga is also one of the most exciting leagues in Europe to watch. On average, 2.91 goals are scored in a match, and a 0-0 draw occurs in less than five per cent of matches.

Another strength of the Bundesliga is the incredible amount of fans that consistently turn out each week. The Bundesliga has the highest average attendance of any football league in the world, with around 45,179 passionate supporters cheering on their team at each game. In comparison, the Premier League averages only 35,278 supporters, while La Liga’s average attendance is just 28,291. Serie A matches draw an average crowd of only 24,363 people.

Borussia Dortmund’s home ground, the Signal Iduna Park, holds 80,000 people and sells out just about every week. The Sudtribune, or South Stand, holds 25,000 active supporters alone. With so many people crammed into a stadium, the atmosphere is hard to describe. The singing, boos, whistles and cheers of ecstasy make the place an electric cauldron of noise and colour.

Borussia Dortmund also has arguably the best active supporter group in the world. The supporters are known for their huge tifo displays that can cover the entire Sudtribune. Images of their recent display against Malaga in the quarter finals of the Champions League garnered worldwide attention.

Bayern Munich also boasts a strong supporter base, packing out the 76,000 seat Allianz Arena each week.

It’s fair to say the A-League crowds in Australia aren’t quite so impressive. Regardless, the A-League came in at a respectable 20th on World Soccer magazine’s list, equal with Colombia and Poland. Surprisingly, according to the magazine’s data, the A-League is ranked higher than the Uruguayan, Scottish, and the United Arab Emirates’ top leagues.

Critics have long questioned whether ageing Socceroo players should return home to finish their careers, or instead ply their trade in countries such as the United Arab Emirates or Qatar. Currently, fringe Socceroos Alex Brosque, Dino Djulbic, Nick Carle, Mark Bresciano, Sasha Ognenovski, Matthew Spiranovic, and Harry Kewell all play in leagues outside Australia. If the A-League is truly the 20th best league in the world, perhaps competing overseas is no longer the best option for these players.

Whilst the A-League is still in its infancy, who’s to say it won’t one day be ranked up there amongst the very best leagues?

Until then, we have the Bundesliga to provide us with some truly outstanding football.

Paddy Naughtin is a third year Bachelor of Journalism student at La Trobe University, and a staff writer for upstart. You can follow him on Twitter here: @PaddyNaughtin