With new health measures and economic incentives in place the industry hopes to regain momentum. 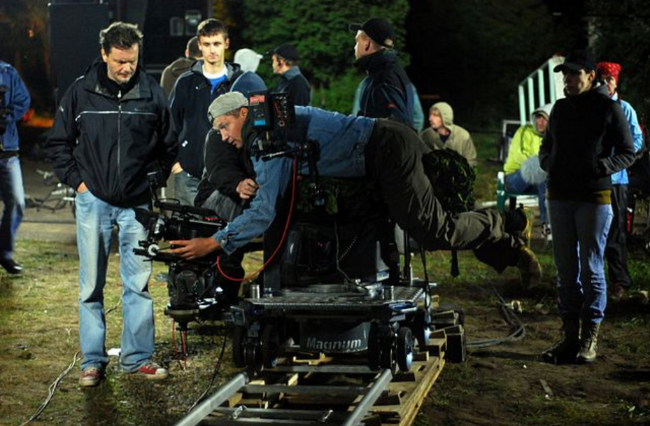 A camera follows the actions of two actors, the set behind them recreating a living room. The director yells to cut and wraps filming for the day. As the cast and crew prepare to leave, one of the film producers enters, approaching the director. The producer asks everyone to wait a minute, before delivering the shattering news that all productions will be shut down for the time being.

A similar scenario occurred on production sites all around the world due to COVID-19. Productions were stopped in the middle of filming or halted before they began. Movie releases were postponed or sent directly to streaming services. As a result, many individuals who worked in the industry were left unemployed. Cinematographer Stefan Duscio found himself in that position.

“I was preparing a pilot in Toronto for NBC Universal and CBS. Unfortunately, two days before we were meant to start rolling, we were shut down, as were many productions worldwide on that fateful day in March,” Duscio told upstart.

The entertainment sector accounts for millions of jobs worldwide. According to the Motion Picture Association (MPA), in 2019 the film industry in the United States alone, accounted for 2.5 million jobs, while in 2017- 2018, the Australian film industry accounted for about 84,000 jobs. It is estimated that a large majority of these jobs were lost due to the pandemic.

However, high stakes for monetary gain are part of the business, so it shouldn’t surprise anybody that the industry is ready to go back to work. But with the number of COVID-19 cases continuing to rise, it was unclear when and what the industry would look once filming recommenced.

In early June, an industry Safety Committee Task Force submitted a White Paper for the Proposed Health and Safety Guidelines for Motion Picture, Television, and Streaming Productions. The proposal was shared with state and local government officials throughout the United States and in key international markets.

The recommendations set forth guidance for the protective measures including regular screening, diagnostic testing and the use of personal protective equipment. It also recommended cleaning and disinfecting work sites and stated the appropriate response should an employee contract or be exposed to COVID-19.

Cinematographer and Tigertail Pictures founder Tian Liu has been filming throughout the pandemic and has adhered to safety protocols, from social distancing to spraying the location before filming.

“I take good care of myself. And the crew follow the rules. We protect each other,” Liu told upstart.

One high-profile project to surge under these new protocols is Malcolm and Marie, a new collaboration between Zendaya and Sam Levinson who worked together on Euphoria. The movie came to life as a result of the shutdown in March. It was the first recorded instance of a movie written and shot during the pandemic. Filming took place between 17 June and 2 July in California, following the different film associations’ COVID-19 safety protocols.

During these months, as the Black Lives Matter movement surfaced, a call for diversity in the industry was reinforced, showing that some things don’t stop, pandemic or not. Some productions highlighting the issue were green-lighted and Liu was involved in one of them.

“I shot a film called We Can’t Breathe, it [is] based on Black Lives Matter, very powerful story,” she said.

Australia, where comparatively cases have remained low, has tried to capitalise on our situation. In July the government announced a $400 million incentive to attract film and television productions to the country over the next seven years.

Additionally, $250 million was pledged to help restart the creative industry over the next year. This includes $50 million for a Temporary Interruption Fund destined to aid local film and television producers to recommence filming for productions that were halted due to challenges accessing insurance coverage for the coronavirus.

Stefan Duscio came back to Australia when the pandemic began.

“Our commercial industry sprang to life again in May when cases were very low. I flew between Sydney and Melbourne, and life almost felt normal again,” he said.

Then the second wave happened in Victoria.

“Our local film industry is not permitted to work under stage four lockdown rules. Which I agree with – we are hoping to go hard and fast and get rid of this virus from Victoria,” he said.

Article: Esther Rubio is a Media and Communication’s exchange student at La Trobe University. You can follow her on Twitter at @ethrbo

Photo: Bryukhovychi (Ukraine). Ihor Podolchak (director) and Mykola Yefymenko (DoP) by Tamara podolchak available HERE and used under a Creative Commons Attribution. The image has not been modified.