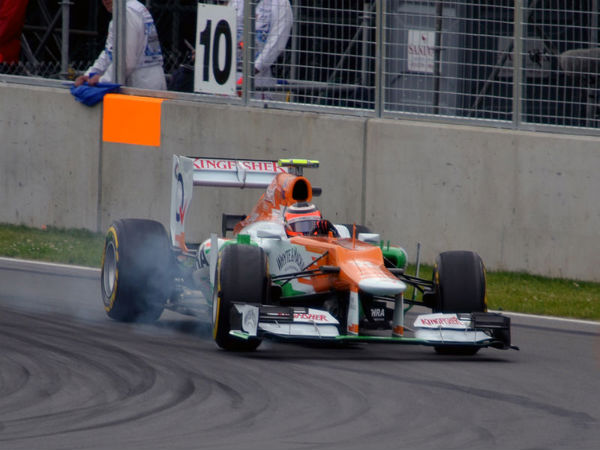 After the two European races in Barcelona and Monaco the Formula One circus once again moves off the continent, travelling to Montreal for the Canadian Grand Prix for the seventh round of the world championship held at the famous Circuit Gilles-Villeneuve.

The Canadian Grand Prix is a favourite on the F1 calendar and attracts some of the largest and most passionate crowds, even though no local drivers have competed in the event for seven years.

Even taking into account the carnival-like atmosphere that surrounds the event, it’s the track itself that provides the bulk of the action.

Canada never fails to provide an exciting Grand Prix, as the high speeds and heavy braking zones allow for plenty of overtaking attempts, whilst the intimidating concrete barriers that sit close to the edge of the tarmac have caught out the very best of drivers over the years.

For the most part the track features long straights followed by chicanes or hairpins, meaning there is plenty of places for driver error. Due to the proximity of the barriers to the track, mistakes are generally punished by a bruising encounter between concrete and carbon-fibre.

The weather rarely fails to play a big part over the race weekend. Massive downpours and/or stinking hot days have both been features in recent years, meaning the teams’ race strategies can be turned on their head without warning.

Whilst the track provides a big challenge for engineers in every sense, the battle against excessively high brake temperatures will be pivotal in deciding who will stand on top of the podium come the end of the race.

Due to the stop-start nature of Montreal, the brake pads and discs are pushed to their absolute limits. This isn’t so much a problem in itself, but because constant heavy braking is required there are no intervals in which they can cool down.

As the circuit is a temporary facility, the track surface evolves quickly throughout the weekend as the track becomes less dirty and more rubber is laid down. This incites graining of the tyres because they struggle for grip.

Pirelli have made their super-soft and medium compounds available this weekend, whilst also bringing two sets of a prototype medium tyre for each team to use during practice.

Under-fire Pirelli motorsport director Paul Hembery has said he expects a two or three stop Grand Prix, but warned the prediction could be revised depending on weather.

Formula One returns to Montreal with the familiar sight of Sebastian Vettel and Red Bull leading the drivers and constructors world championships respectively. However this is the only circuit, which appears on the Grand Prix calendar each year, where the three-time world champions are yet to win.

Ferrari’s strength under braking will certainly put them as one of the favourites this weekend, with Fernando Alonso looking to close the gap on championship leader Vettel and Kimi Raikkonen ahead of him.

Lotus’ Kimi Raikkonen endured a frustrating Monaco Grand Prix two weeks ago and will be looking to atone for it at a track where he has won before, and get his championship charge back on track.

The McLaren duo of Jenson Button and Sergio Perez clashed for the second time this season at Monaco, but they look a much better prospect than during the opening stage of the season. They are edging closer to a podium finish, but are still too far off the pace for it to happen at Montreal.

Nico Rosberg heads into the weekend full of confidence after claiming his second ever career last race, but this is a track his Mercedes teammate Lewis Hamilton has been traditionally strong at. Whether they have improved on the tyre issues still remains a mystery, as Monaco is a track that is far less harsh on the rubber than a majority of other circuits.

Jean-Eric Vergne hit back in Monaco in the battle of the Toro Rosso’s, but Aussie Daniel Ricciardo has been far more consistent this season; minus the retirements, all of which were out of the 23-year-olds control. The two young guns will be fighting for minor points in Montreal.

Set the alarm. The Montreal Grand Prix promises to be a cracker.

Daniel Baricevic is a third-year Bachelor of Journalism (Sport) student. You can follow him on Twitter: @danielbara4